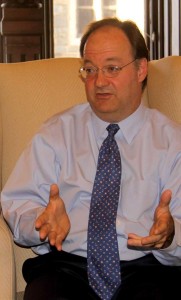 In an interview with student media on Tuesday, Georgetown University President John J. DeGioia discussed campus development, wireless Internet service and the series of recent break-ins and sexual assaults. The overriding focus of DeGioia’s remarks, however, was the recession’s ongoing effects on the university.

“The good news is, this past year, the worst year in 70 [years] in terms of the economic performance of our country, we’ve had our greatest fundraising ever. We worked hard, and we weren’t sure we were going to do that well, but we raised $186 million this past year,” DeGioia said. “It was really an extraordinary year.”

“There’s one fundamental reason why we’re ranked 23rd, and we’re not ranked higher, and that’s because if you look at the metrics, we don’t have the financial resources of our peers,” DeGioia said. “That’s not a new phenomenon, that’s history, and the basic bottom line is that Georgetown didn’t really begin serious philanthropic efforts until the early 1980s; and so while we’ve been growing at a pretty good rate relative to our peers, and while we’re certainly competing at a much higher level than our peers, we recognize that improving our financial framework is a critical aspect of our future.”

DeGioia said increased fundraising would have an impact on student facilities as well, particularly with regard to student space and wireless Internet service.

“We have in our fundraising plans the New South renovation that we hope will be able to raise funds that will create significant student space in the old New South cafeteria,” DeGioia said. “We are trying to address issues relating to recreation and athletic facilities, and those also would likely play an important role in our next campaign.”

But the issue of wireless Internet for students is more complex, he said.

“The wireless issue is a tough one, and that’s simply a question of prioritization of our IT needs. Again, if we had more financial resources, we would go deeper into our priorities,” DeGioia said.

He added that the university has widely discussed its priorities regarding wireless, and has sought advice outside of the university to make sure that the most pressing issues are addressed first.

“In my first few years in this role, we brought closure to a campaign that we began at $500 million, and we ended at $1 billion,” DeGioia said in reference to the university’s fundraising “Third Century Campaign”. “Now we’re planning a larger campaign. More than likely sometime in the next year we’ll go public with that campaign.”

DeGioia also said that the university made changes to its financial aid policy to reflect the current economic situation.

“The most significant thing we did in response to the financial crisis was to increase our financial aid budget to 18 percent, and a tuition growth that was the smallest in 37 years,” DeGioia said. “We increased the budget rather substantially to ensure access and affordability.”

DeGioia addressed other issues on the minds of many students, including [the recent string of crimes attributed to a “Georgetown Cuddler”](https://www.washingtoncitypaper.com/blogs/sexist/2009/09/16/a-georgetown-cuddler-timeline/).

“The importance of close collaboration between DPS and student life with MPD couldn’t be more important than right at the moment that we’re in and it’s been a very cooperative and collaborative relationship, and we’re very grateful to the seriousness with which MPD has taken the issues that we’re concerned about,” DeGioia said.

When DeGioia was asked to discuss the Media Board’s decision this spring to halt negotiations for the independence of The Hoya, he deferred the question to Vice President for Student Affairs Todd Olson.

“We respect the decision that was reached and we will continue working with The Hoya in its current context for now, and keep the door open for future conversations about independence should that be of interest,” Olson said. “