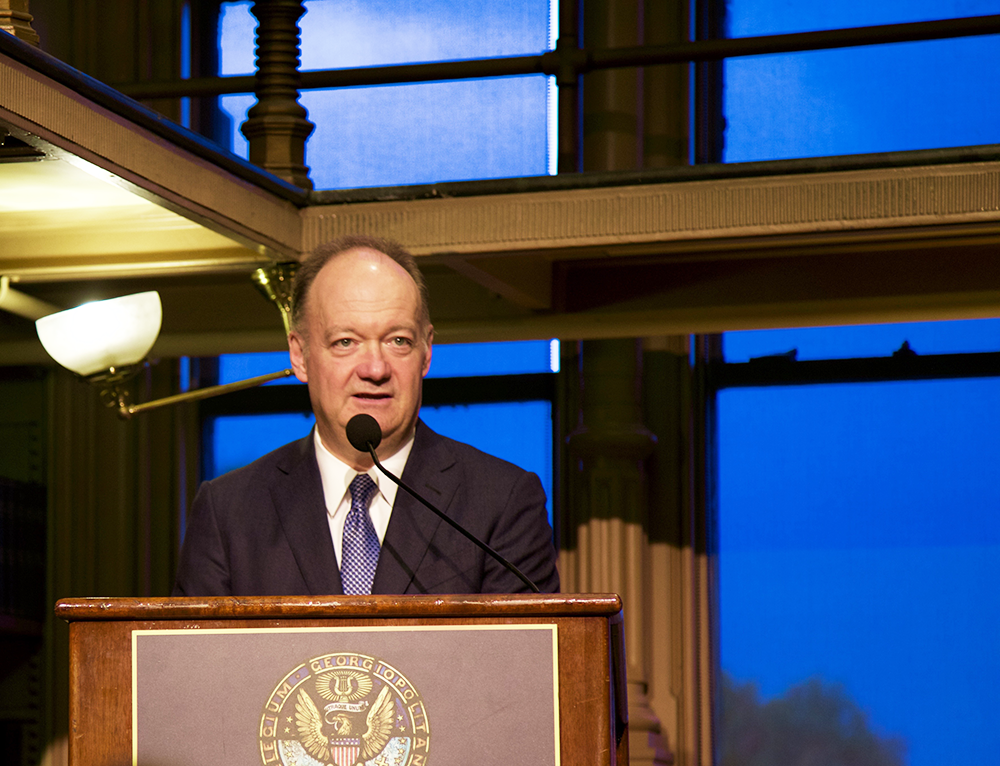 University President John J. DeGioia raised objections to two Republican tax reform proposals in the House and Senate, writing in a Nov. 21 email to the community that provisions of the bills “reduce the affordability of higher education.”

“We strongly object to any provisions that limit our ability to support our mission of education and research or that inhibit access and affordability,” DeGioia wrote.

DeGioia wrote that the university is “particularly concerned about several provisions that reduce the affordability of higher education,” including provisions that would remove the tax-exempt status of employees’ and graduate students’ tuition benefits and prevent borrowers from deducting interest paid on student loans.

The university has voiced its concerns to members of Congress and is cooperating with other higher education institutions to make them resonate on Capitol Hill, according to DeGioia.

The statement marks the third time DeGioia has voiced public opposition to policy initiatives backed by the Trump administration in the past year.

He previously condemned the administration’s decision to rescind the Deferred Action for Childhood Arrivals program, an Obama-era program providing legal protection to about 800,000 undocumented immigrants who came to the United States as children. DeGioia also spoke out against Trump’s original travel ban executive order, which banned immigration from seven Muslim-majority countries and restricted the acceptance of refugees, calling its implications “significant and concerning” in a campuswide email Jan. 29.

Separate versions of the Tax Cuts and Jobs Act, one of President Donald Trump’s flagship proposals, are working their way through the House of Representatives and the Senate. The House’s version passed Nov. 16 with 227 votes, while the Senate version is scheduled for floor debate beginning Nov. 30 after clearing the Senate Finance Committee on Nov. 16 by a one-vote margin.

Both versions curtail government aid for students by cutting programs such as the Lifetime Learning Credit, which allows families making less than $130,000 a year to claim a credit of up to $2,000 per year. The bills would also terminate the Hope Scholarship Credit, which refunds families making less than $180,000 a year up to $2,500 per student for the first four years of post-secondary school education.

The bills would also repeal the Student Loan Interest Deduction, a program through which students who have already graduated can subtract $2,500 off their student loan interest payments each year if they individually make less than $80,000 per year, or less than $160,000 if married. Twelve million taxpayers benefited from this provision in 2014.

But the reform would also affect the university’s financing, as the House’s version contemplates terminating private activity bonds, which are used by colleges and universities to build facilities. Both versions would end the use of advanced refund bonds, which allow the university to refinance its debt at a lower interest and would accumulate funds over the years.

DeGioia encouraged students, faculty, staff and family members to inform themselves on the bill, and directed them to the website of the American Council on Education, a coordinating body for American colleges and universities.

“Since the legislative process is evolving, I encourage you to stay informed of the latest developments,” DeGioia wrote.