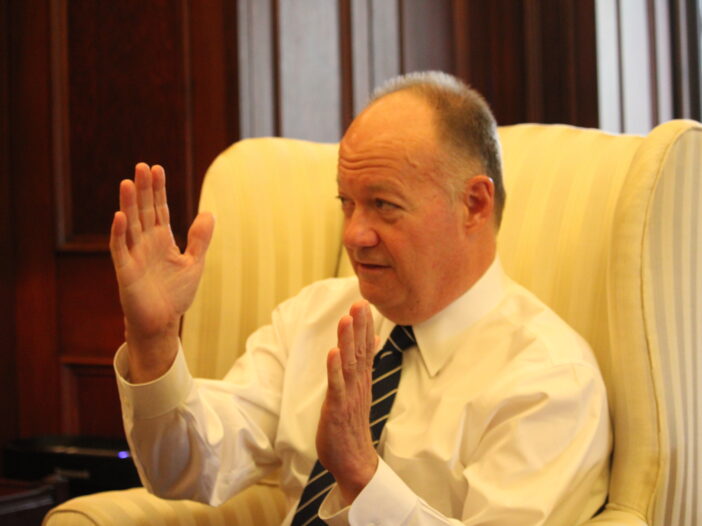 From the potential rescission of Rudy Giuliani’s (H ’02) honorary degree to Georgetown University’s lack of abortion care resources in the wake of Dobbs v. Jackson, university president John J. DeGioia (CAS ’79, GRD ’95) sat down with Katie Hawkinson (COL ’23), The Hoya’s editor in chief, to discuss updates from across the Hilltop.

This interview has been edited for length and clarity.

Hawkinson (KH): Giuliani is currently being investigated regarding alleged attempts to overturn the 2020 presidential election in Georgia. Giuliani also had his law license suspended in New York in 2021, and he is set to attend a disciplinary hearing in D.C. in October for charges related to the 2020 election. Yet, Giuliani continues to hold an honorary degree from Georgetown University. Does the university have any plans to rescind his honorary degree?

DeGioia (JD): We’re tracking the external reviews that are taking place. We’re aware of what has unfolded in New York, we’re aware of the hearing that will be here in Washington, D.C. and we’re aware of what’s unfolded in the January 6th hearings. We will likely watch what unfolds over the next few weeks to see if it calls for action on our part. Ultimately, rescission requires me to bring a recommendation to the board of directors. Ultimately, it’s their decision.

KH: While abortion is still legal in D.C., how is Georgetown hoping to support students with access to reproductive health care, especially students who come from states across the country that are stripping away those rights after the Dobbs v. Jackson Women’s Health decision?

JD: We’ve been guided as a university by the ethical and religious directives on Catholic health services that the U.S. Catholic Bishops put forward. At an overarching level, we’ve been guided by what in Catholic moral teaching would be referred to as the consistent ethic of life, where we regard the protection of life, from conception to end of life care, along a continuum of profound respect for the dignity of life. I think our role will be to ensure we can provide a forum for the richest and the most engaged dialogue possible. We have always had a unique role to play in those kinds of discussions. I would say that those decisions regarding the need for access to different kinds of resources would fundamentally be made within the relationship between the doctor and the patient.

KH: So, the university would not provide any resources or information for students to learn about abortion access in the District?

KH: What updates can you provide regarding the university’s current work with the descendants of the GU272+ and activists in the university community?

JD: Our student group, which is composed of students across our university, including undergraduates, students recommended by GradGov and folks from the Black Law Student Association at the Georgetown University Law Center, began its work last spring, and they will be prepared to distribute some of this year’s funds pretty soon. They’re in consultation with an advisory group of descendants in this ongoing conversation about how best to utilize these resources. Our commitment has been $400,000 a year, we had 500 people contribute to the fund this past spring. So we’re pretty confident we’re going to be able to hit our target year in and year out.

KH: Nearly eight months ago, Georgetown University was sued for allegedly using a shared methodology to limit and calculate applicants’ financial aid packages. Do you have any updates on how you plan to rebuild trust with Georgetown students amid these allegations?

JD: While we’re engaged in this litigation, it’s very hard to take steps to earn the trust of our students. When all the dust settles, and this case is over, I think our students will see that our policy of being need blind is meaningful. We did so in a way where we validate methodology in consultation with others. This has ensured that more students have had more access to this university than any alternative policy could have ever provided.

KH: Georgetown University filed an amicus brief advocating for the U.S. Supreme Court to uphold affirmative action. Could you walk me through the story of this brief, as well as why it was an important issue to you and the university at large?

JD: We’ve had a deep commitment to the practice of affirmative action for a half-century. That’s about how long it’s been an intentional part of higher education. I felt that it was very important for us to find the most appropriate way to ensure that multiple voices were heard in these cases. We felt that there was an argument that we could add that complements the argument that Harvard makes their case. I was very proud of the work that emerged that we should provide that leadership, and that our peers joined in and found it to be worthy of their signing on to. Also, we took all of our senior leadership team away for a retreat in late May, early June focused on affirmative action. We took everybody through those 50 years of cases, our practices here and what’s at risk. We did the same with our board of directors. The intent is always to ensure alignment.