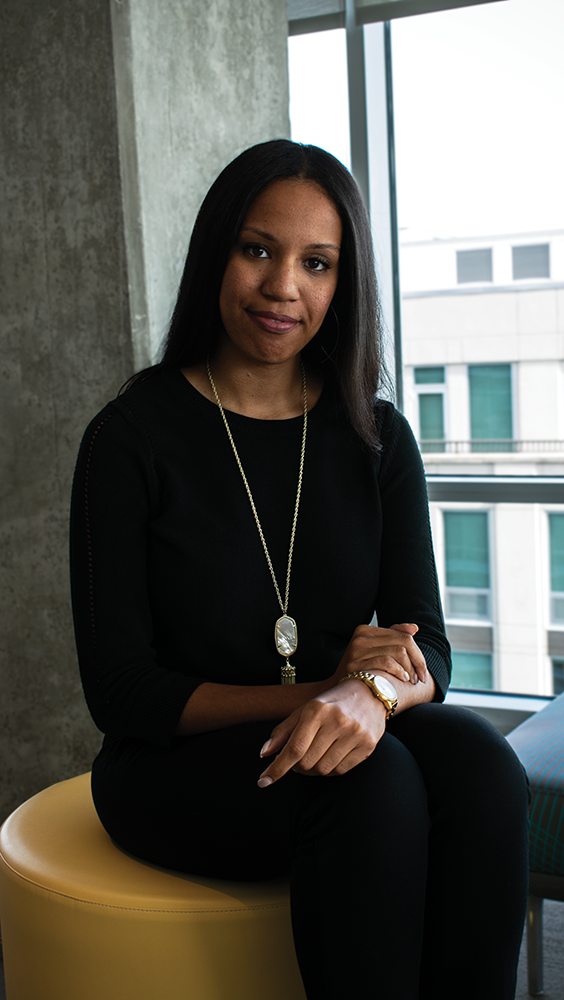 When Lauren Crump received the call informing her she was a descendant of one of the 272 slaves sold in 1838 to financially sustain Georgetown University, she was floored. This revelation presented Crump with the opportunity to play a role in deciding how a historic institution addressed its past with slavery and atoned for its sins.

Though a positive relationship between slave descendants and institutions that were built upon slavery is largely uncommon, Crump did not shy away from it. Instead, she saw an opportunity to help form what she called a “redemptive society.”

However, her decision to engage with the university and become a graduate student at the institution was not an easy one. Crump explained that there was often a silent assumption that she was speaking on behalf of black America, and with this came the pressure to make her race and her lineage proud.

“There is an additional weight to do well for the rest of my community, especially those whose voice you will never hear, who have plenty to say — more than I do,” Crump said, in an interview with The Hoya during the GU272 trip.

Among the descendants, there are varying opinions on what Georgetown’s process of reconciliation should look like. One of the main suggestions is a financial contribution to the descendant community. However, Crump does not view this as an effective solution.

“A cash payout is way too transactional,” she said. In her opinion, it  would not be impactful enough on the future generations of descendants and would bear a risk of some descendants not receiving anything at all.

“We need to create goals with perpetuity… and legacy in mind,” Crump said. However, she said this cannot happen unless the descendant community has a say in what such goals and solutions look like, something Crump fervently believes they deserve.

One of the solutions that Georgetown has already implemented is the legacy status given to descendants who apply. Crump is one of the four descendants who has taken advantage of this so far, having recently started graduate studies pursuing a M.A. in international business and policy.

Though Crump admits that she initially felt some hesitation toward attending the university, it was the staff members who eventually won her over. Their sincerity indicated to her that Georgetown was genuinely interested in building a relationship with the descendant community and repairing its historical wrongs. She attributes her willingness to forgive Georgetown to her faith.

The Liturgy of Remembrance, Contrition and Hope service for the GU272 in Dahlgren Chapel coincidentally took place two days after Easter Sunday on April 18, 2017. This pushed Crump to ask herself: “Who am I not to forgive?”

Such a question was especially significant for Crump to reflect on when considering that many institutions in this country were complicit in slavery and the oppression of black Americans, according to Time. With this in mind, she felt that attempting to avoid such institutions would be deeply difficult, therefore leaving her with two options: to either re-segregate herself or become part of creating a new history.

Nonetheless, Crump believes it is vital that Georgetown recognizes that not all descendants’ aspirations will align with attending Georgetown.

“Whatever route that descendant chooses to go, Georgetown should have a plan for upward mobility,” she said.

This is especially important to Crump because of the way in which the generational effects of slavery continue to manifest themselves within the descendant community. She sees it most potently displayed in the lack of economic, educational and social development in Maringouin, La., the rural town where many of the GU272 were sold and where many of their descendants remain today.

“Maringouin is still very much so, a time capsule, in the best and worst sense. I haven’t seen very much progress and … so many of [the residents] feel hampered by their environment,” she said.

With complete candor, Crump admits that she is unsure of what exactly these reparative solutions should look like. She insists that the recruitment of experts is necessary to repair the deep effects of the 1838 sale and the remnants of slavery that persist in the university.

Nonetheless, Crump deeply believes in the power of dialogue not only with the descendants on reparations but on Georgetown’s campus about race and racism.

“Even a conversation is progress,” she said.

She hopes that Georgetown will use its position of power to bring about change not only on its campus but throughout the country and to serve as an example for other institutions who benefited from slavery.

Furthermore, Crump hopes that both her local and descendant communities feel empowered to contribute to the effectuation of this change. Her desire to honor her legacy explains her deep interest in being a part of this reformation. She invites not only Georgetown to involve itself in this journey, but also its students and other institutions.

“We all have an opportunity to write this story, and some of the effects of the plans that we write right now we won’t see, just like some of the benefits we are experiencing right now are results of people we will never meet,” Crump said.