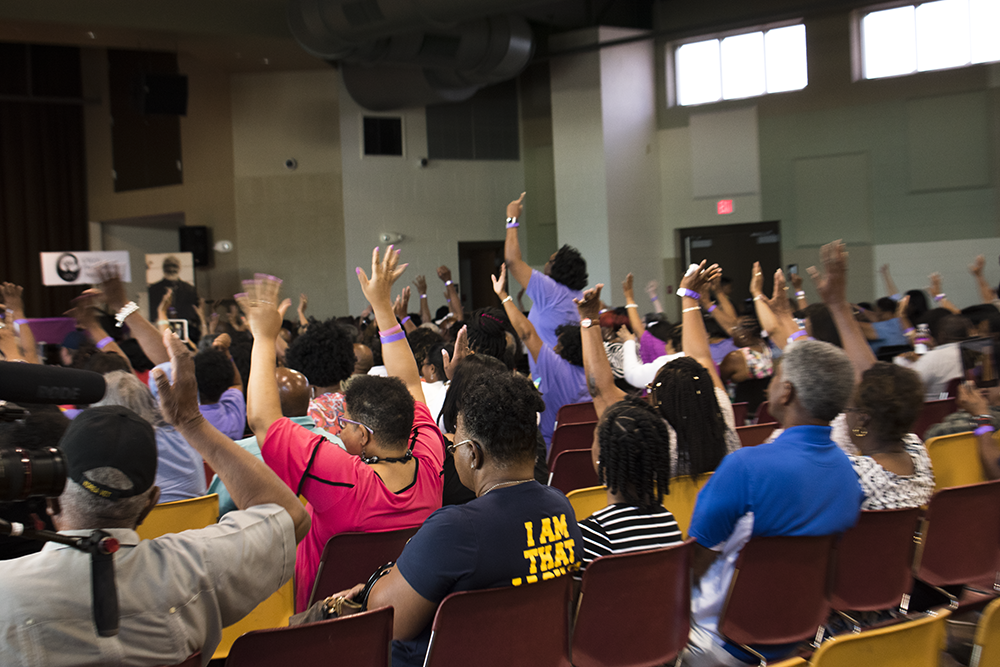 Following the revelation that the Society of Jesus sold 272 enslaved people in 1838 to keep Georgetown University afloat, both the student body and descendants of the GU272 made demands for reparations. So far, the university has responded by offering legacy status to descendants, but out of the thousands of them living today, only five have enrolled in either the university’s undergraduate or master’s programs.

Karran Harper Royal, the executive director of the GU272 Descendants Association, one of the three formal descendant organizations, believes these numbers reflect how offering legacy status fails to cater to the educational needs of many descendants.

Harper Royal advocates for the university to recognize that descendants have different educational aspirations, which may not include attending Georgetown, and many descendants agree.

Harper Royal offers her 22-year-old son with Asperger’s Syndrome, who has yet to graduate from junior college, as an example.

“He’s a descendant of Isaac Hawkins. My son needs help. My son is brilliant. My son is a descendant. It would be great if we could have applied to our foundation to get him an academic coach,” Harper Royal said.

Others believe that in addition to educational opportunities, the Jesuits must also reignite efforts to reunite descendants whose ancestors were separated by bondage.

Recognizing Racial Legacies
Harper Royal suggests that Georgetown implement an personalized approach, whereby descendants can independently determine which educational paths they will take with financial and academic support from Georgetown and the Jesuits.

Harper Royal said this would be a step towards remedying the generational impact that the 1838 sale had on descendants’ social, economic and educational progress.

“It has to be an individualized process, where descendants can be self-determining what they need,” Harper Royal said.

Similarly, Lee Baker, a descendant of Nace and Bibey Butler, two of the 272 slaves sold, said he does not think that legacy status sufficiently supports educational development for the descendants.

He said he believes the Jesuits have a responsibility to invest in the education of descendants from as early on as elementary school to ensure that descendants are equipped with the academic skills to apply to and thrive at universities like Georgetown.

Sandra Thomas, former president of the GU272 Descendants Association and mother to two of the descendants who have enrolled in Georgetown, shared these sentiments.

“If you catch them while they’re young, and I mean even 2 years old … you can really make an impact with their outcomes later,” she said. “Without that foundation, you’ll always be scrambling to catch up.”

She suggested that Georgetown students tutor young children on a rotational basis through intensive educational programs in areas with a high concentration of descendants, such as Maringouin, La.

One of the main goals of the GU272 Descendants Association is to attain a billion-dollar fund not only to further the educational development of descendants, but also to give grants to groups working toward alleviating racial tensions and encouraging healing from the legacy of slavery.

Such healing is not only necessary for those who are descendants of slaves, Harper Royal said, but also for the descendants of those who benefited from slavery and participated in the business of buying, selling or working humans as property.

Harper Royal said she believes that the institution of slavery had brutalizing effects on the entire country and that all Americans, regardless of their race or background, would benefit from the foundation and its reparative work.

As a lifelong Roman Catholic, Baker asserted that the Jesuits have a responsibility to acknowledge how racism and remnants of slavery continue to affect black Americans today. He encouraged the Catholic Church and the Society of Jesus to educate students in their schools on slavery, its aftermath and the church’s complicity in it, steps he has not seen from the Jesuits or Georgetown University.

“We kind of filter a lot of the ugliness that has happened,” Baker said. “We have been complicit in a society where it’s been racist, sexist and all of that. Catholicism and religion have been a part of it too. We need to own it in a way, in a holy way, and talk about it.”

Mélisande Short-Colomb (COL ’21), a descendant of Abraham Mahoney and Mary Ellen Queen, two of the 272 people sold in 1838, has expressed similar dissatisfaction with the way slavery and its generational impacts are addressed.

“We have mythologized who we are as a nation, as a people, and that is to the detriment of all Americans,” she said.

For Short-Colomb, this highlights an inexcusable level of hypocrisy among not only the Jesuits, but U.S. citizens too.

“We want to go out and spread democracy across the world, and truth and freedom and the American way, while we are drowning in bigotry, disenfranchisement, racism and sexism in America,” Short-Colomb said.

Reuniting Separated Families
Family separations are a devastating effect of slavery that are often overlooked, according to Harper Royal. Over 150 years after the Emancipation Proclamation, which freed over 3.5 million enslaved people in states across the South, many black Americans have thousands of relatives across the country of whom they are unaware because of the forced separation that took place during slavery.

For Harper Royal, reunification is an opportunity to reconnect what slavery tore apart. As the executive director of the GU272 Association, she dedicates much of her time to finding and reuniting the families and descendants of the 272 enslaved people sold in 1838 and said she feels privileged that she is able to do this on behalf of her ancestors.

“We honor these ancestors every single day as we reunite our cousins,” Harper Royal said. “I wish there was more than 24 hours to the day. This is the greatest revenge to slavery, reconnecting our families. It is so healing to put together what slavery tore apart.”

However, many of the descendants including Harper Royal have expressed a dissatisfaction with the little effort the Jesuits and Georgetown University have made in helping with this process of reunification.

Based off of the recommendations in the working group’s report, the two campus buildings were renamed permanently — one to commemorate Anne Marie Becraft, a black woman who founded one of the first schools for black girls in Georgetown in the 19th century, and one named after Isaac Hawkins, the first name listed on the 1838 Bill of Sale between Mulledy and purchasers in Louisiana. Additionally, the university has publicized historical documents and research through the Georgetown Slavery Archives.

That work has fallen to the Georgetown Memory Project, which aims to identify the 272 slaves and locate their living descendants.

Though the project was started by a Georgetown alumnus, Richard Cellini (COL ’84, LAW ’87), it remains independent of the university itself. As of Aug. 1, 2018, it has located and connected 6,835 direct descendants of the GU272 across the country, many of whom have now unified to form the descendant groups mentioned.

Receiving Descendant Input
Though there are varying ideas throughout the descendant community on what reparative steps the Society of Jesus and Georgetown University should take, there is a general consensus that descendants deserve a say in these decisions.

Such sentiments were only heightened when Georgetown University’s Working Group on Slavery, Memory and Reconciliation released a set of recommendations Sept. 1, 2016 without the involvement or approval of any descendants.

Some of the recommendations made were that Georgetown issue an apology for its participation in slavery and publicly memorialize the enslaved persons on campus. Earlier this month, The Hoya reported that the university did not disclose to either descendants or the working group that human remains had been unearthed in 2014 during the construction of Arrupe Hall, built on the former location of a segregated graveyard used for the local Catholic community.

For many descendants such as Harper Royal, reconciliation cannot be attained without the input of the descendant community.

“From the descendant perspective, what’s going on at Georgetown is a university process. It’s not a descendant process,” Harper Royal said. “We have to have a proportionate moral response to the sale of our ancestors.”

“A key focus in recent months has been many discussions with Descendants to determine how we might establish a joint and collaborative framework for partnership and dialogue. This work is very important and is being it must be pursued with great care and sensitivity,” Ferrara wrote in an email to The Hoya.

Sept. 1 will mark two years since the working group released its recommendations, and many descendants still do not feel listened to by the university. On campus, the only reference to the university’s ties to slavery is the name of Isaac Hawkins Hall, a reference to the first enslaved person recorded in the 1838 sale of the 272 slaves that saved Georgetown.

“The university, the administration, has never said or done anything publicly beyond the recommendations of the working group, having the name changes of the buildings, the little event that they had in April of 2016 — it’s going to be April of 2019 and nothing more has gone on with that. They planted a tree,” Short-Colomb said.