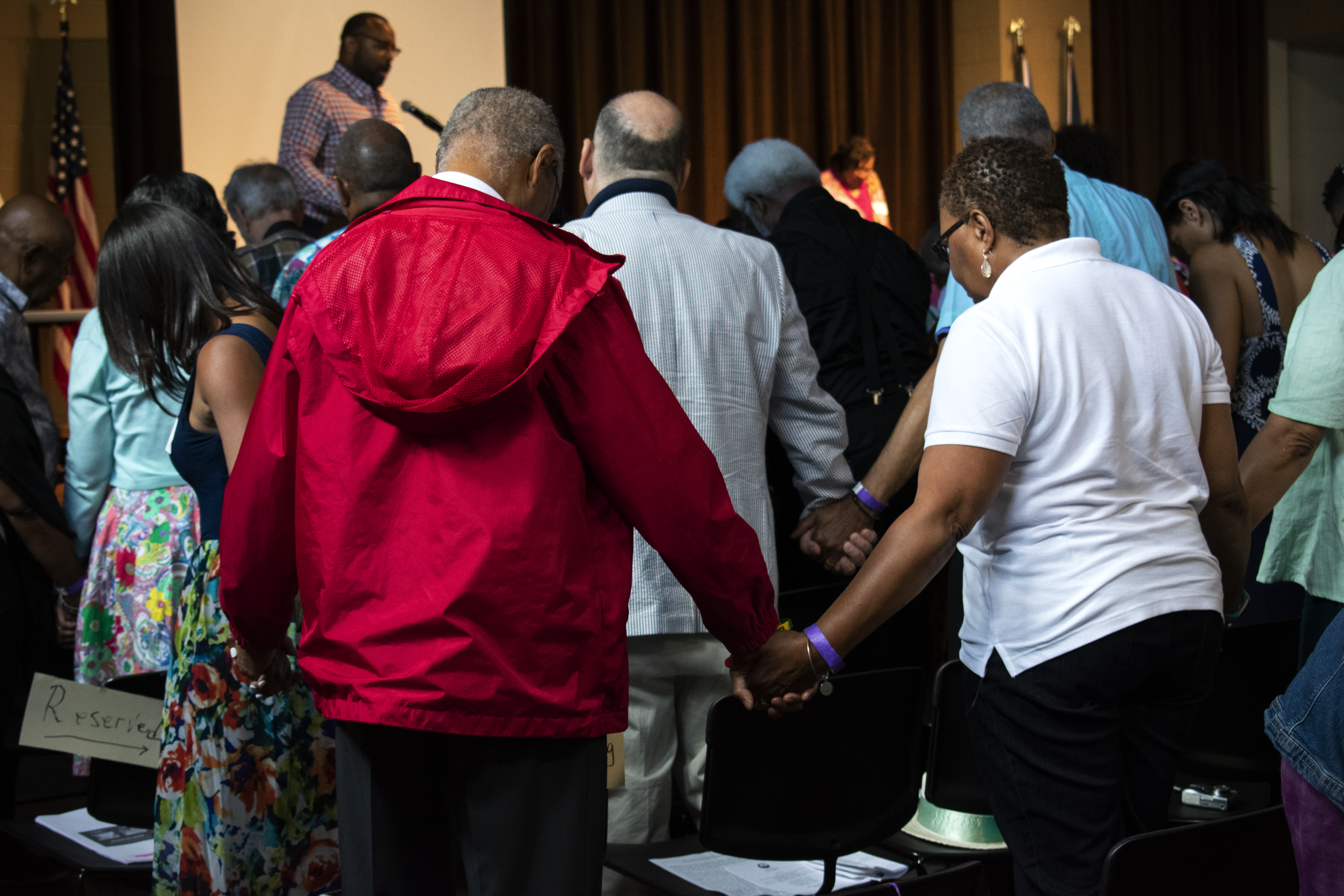 Rosedale, La. — The GU272 Descendants Association hosted a reunion Saturday to bring together about 500 of the descendants of the 272 slaves sold to Louisiana by the Maryland Society of Jesus in 1838 to save Georgetown University from bankruptcy.

June marks exactly 180 years after the signing of the Articles of Agreement in 1838, which finalized the sale of the 272 enslaved children, women and men. The descendants who gathered at the North Iberville Community Center in Rosedale, La., came to reconnect their families and honor their ancestors.

The reunion was part of a series of events throughout the weekend, including a tour of Whitney Plantation, a museum devoted to slavery in Wallace, La., Sunday mass at the Immaculate Heart of Mary Catholic Church in Maringouin, La., and an ancestral bus tour through the four Louisiana parishes to which the slaves were sold.

The property on which the North Iberville Community Center sits today was once worked by 54 members of the 272 as it was owned by the Louisiana slave purchaser and plantation owner Jessie Batey.

Members of the descendant community traveled from across the United States to deepen connections that, in many cases, had previously only occurred through social media.

Although descendants have been connecting and organizing with one another since 2016, this reunion offered an opportunity to form new relationships.

Julia Blair Battle is a descendant of Sam Harris and Betsy Ware Harris, whose names appear on the manifest of the Katherine Jackson, the ship used to transport the slaves to Louisiana after the sale. Battle has been working with a group of her cousins to piece together the oral histories their parents once shared and said the reunion marked an exciting new page in the story.

“This is a critical event because now you have the face-to-face,” Battle said. “This event plays a big part in actually physically and emotionally tying people to one another.”

Known as Peaches in the descendant community, GU272 Descendant Association Officer At-Large Lucille Victor said the reunion event provided a means of furthering research and continuing conversations surrounding reconciliation, in addition to uncovering and expanding familial ties within the community.

“What [the reunion] does is it allows people to know so much more than they ever knew,” Victor said. “People now are going to be hungry for knowledge to be able to find out more about their families and how they’re related. They’re going to have that same pride that I have where I am saying, ‘My goodness, I am so much more than I thought.’”

The descendants were able to build upon their prior knowledge through open dialogue with one another, despite the differences in professions, religions, home states and the various levels of expertise on the history of the 1838 sale, Battle said.

“It is definitely an exchange of ideas, definitely a change of people’s views on the human condition at that time and how that has affected us now,” Battle said. “I think it’s a launching pad.”

The reunion focused on fostering relationships and taking action for future generations of descendants. Talk of Georgetown University and the Jesuits’ responsibility in reconciliation arose, with some descendants suggesting financial reparations and others supporting Georgetown-backed education for the youth.

Some, like Clayton, have commended the university for having publicly addressed and apologized for its involvement with slavery and expressed a willingness to directly contribute to expanding opportunities for descendants.

“Guys like me, when the opportunity is right, would probably like to reach out and help Georgetown put together whatever program they put together,” Clayton said.

Despite moments of reflection on Georgetown and the Jesuits’ roles, the majority of discussions focused on the connections among those in attendance.

Newfound connections have led some descendants to knowledge about how deeply the history of the 272 is woven into the United States’ history.

His research outlined the number of descendants whose ancestors were dispersed throughout Iberville, Ascension and Terrebonne parishes in Louisiana, as well as recent discoveries about some of those listed on the manifest of the Katherine Jackson but who remained in Maryland.

Coupled with his research, Cellini has developed a profound personal connection to the legacy of the GU272 and the descendants.

“It’s the most amazing family reunion that I have ever been a part of,” Cellini said. “It’s very beautiful. It makes me cry. It brings me to tears. I mean, this is the first time in 180 years that this family has been back on this soil. Nobody ever thought it was possible.”

For Cellini, the descendants’ roots in Georgetown and Catholicism — a religion introduced to the slaves of the Jesuits during their enslavement on the Maryland plantations — were evident during the reunion.

Like many other descendants in attendance, Joe Stewart, who is a non-officer director of the GU272 Descendants Foundation, said he believes the reunion is the first gathering of many.

“We have been organizing and moving forward since August 14th of 2016. This is just building. This is not an ending event,” Stewart said. “This is part of continued success toward the future.”

Although Saturday’s reunion was the first time many descendants were able to meet face-to-face, the event also reflected many descendants’ desires to continue working toward building their community and expanding their reach.

“This event shows anybody that has any eyes open the unification of descendants. For all us not to know anything about each other two years ago, to show up here to the epicenter of our ancestors’ enslavement — we have come here to go forward into the future,” Stewart said.

This article is part of series in a special project supported by the Fund for Investigative Journalism and SaxaFund. Read more here: https://www.thehoya.com/category/features/tracingthe272/.