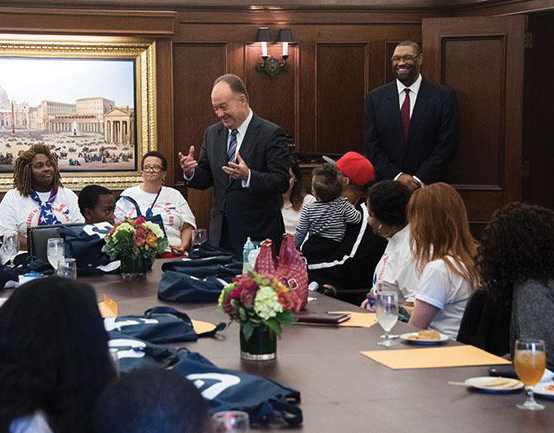 The Legacy of GU 272 Alliance, a group of descendants of the 272 slaves sold to a Louisiana plantation in 1838 whose sale benefited Georgetown, has hired lawyers to facilitate talks with Georgetown as the university looks to reconcile its slaveholding past.

The group, which is made up of about 100 descendants of the 272 slaves, is hoping its attainment of a legal team will help it gain more of a voice in the reconciliation process.

The group is separate from the GU 272 Descendants Association, another group of descendants of the 272 slaves.

Adjoa Aiyetoro, a professor at the University of Little Rock William H. Bowen School of Law and one of the six lawyers working pro bono to aid the Legacy of GU 272 Alliance, said the group’s main goal is to be more involved in the reconciliation process with the university.

“What has happened to date is that Georgetown is making decisions about what to do and they aren’t really reaching out to descendants as a whole to ask what is it you would like us to do,” Aiyetoro said. “In talking with Georgetown, they felt that it was important that they get people who are skilled in negotiations and discussions with institutions such as Georgetown. They felt they would be heard better that way.”

Senior Director for Strategic Communications Rachel Pugh said the university is committed to including descendants in ongoing conversations throughout the reconciliation process.

“Our senior leaders have met with descendants and their representatives who have approached the university and our students, faculty and administrators have traveled to meet descendants where they live. We will continue to seek their input while working to promote racial justice through research and teaching,” Pugh wrote in an email to The Hoya. “We look forward to continued dialogue within our community and across the nation.”

University President John DeGioia announced a series of initiatives to address the university’s connections with slavery in September, including the granting of legacy status to the descendants of the 272 slaves sold by the university to a Louisiana Plantation in 1838 and the establishment of an institute dedicated to scholarship on slavery and its implications in the United States.

The university announced plans March 24 to rename Freedom Hall as Isaac Hawkins Hall, in honor of the first enslaved person recorded in the 1838 sale of the 272 slaves that benefitted Georgetown, and Remembrance Hall as Anne Marie Becraft Hall, in honor of a free women of color and educator in the Georgetown neighborhood during the 19th century, on April 18.

The two halls that constitute the Former Jesuit Residence were first renamed from Mulledy Hall and McSherry Hall after a series of student protests and a sit-in in DeGioia’s office in November 2015. Former University President Thomas Mulledy, S.J., authorized the sale of the 272 slaves to a Louisiana plantation, while former University President William McSherry, S.J., served as Mulledy’s lawyer during the sale.

The university also plans to offer an official apology for the university’s relationship with slavery in a spiritual ceremony in partnership with the Archdiocese of Washington and the Society of Jesus on April 18.

According to Aiyetoro, the group feels the university has not done a sufficient job of fulfilling the recommendations put forth by the working group in its report.

“Once they revealed and disclosed these injuries back in 2015, they are continuing to make decisions without full inclusion of descendants,” Aiyetoro said.

History professor Adam Rothman, who was a member of the Working Group on Slavery, Memory and Reconciliation, said the university’s efforts to tell the history of its involvement in slavery could also involve descendants more substantially.

“There’s a lot of room for collaboration on that project between descendants and those who are doing research here at the university. That could be very constructive and very productive,” Rothman said.

“We hope that the university will have a forum on April 18,” Aiyetoro said. “Where descendants can ask specific questions of and make comments to the leadership both of the Jesuits and of Georgetown.”