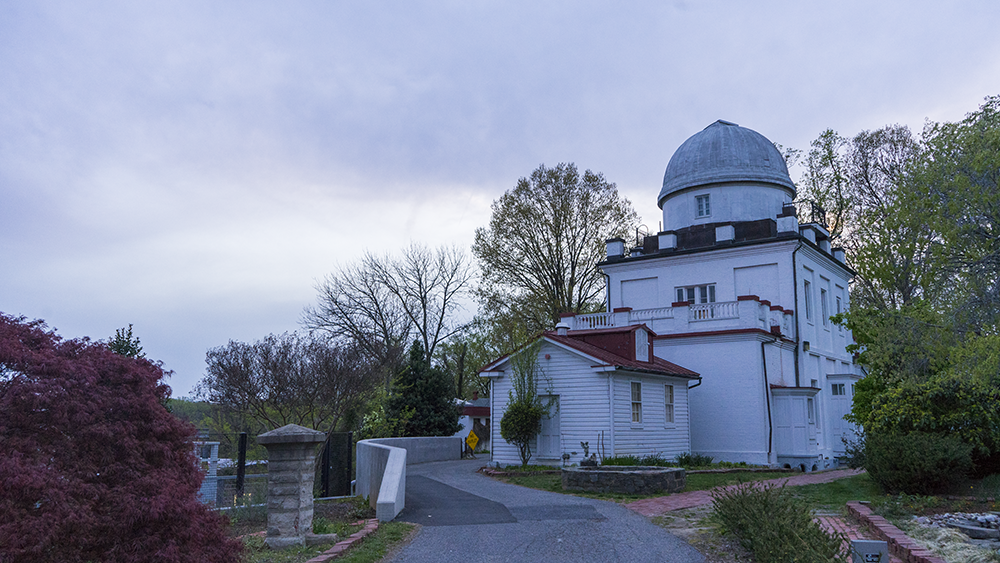 Hidden behind the Yates Field House lies a white, dome-topped building often forgotten by the Georgetown community: the Georgetown University Francis J. Heyden Observatory. Few students venture back there, and those who do rarely enter. Today, the observatory faces maintenance neglect and is in need of renovations, according to students and faculty who continue to use the building.

Yet despite its current rundown nature, the observatory has a rich history dating back to 1841. The Heyden Observatory continues this legacy of astronomical education to this day, in particular for the Georgetown University Astronomical Society.

In Need of Repair

“It does have a cracked foundation. It needs major care and infrastructure help,” Barrows said. “The dome keeps having problems and doesn’t open very well.”

Yet, as Barrows noted, the observatory is often neglected on campus.

Funding issues for the observatory have persisted for years. In 2013, the observatory competed for a $100,000 grant from Partners in Preservation, a partnership between the National Trust for Historic Preservation and American Express. With that money, the university hoped to restore parts of the building, remove the lead paint covering the base of the building, paint the exterior and examine and stabilize the structure’s roof.

Five years later, however, there are no renovation plans for the observatory.  Last year, the university commissioned a study to examine the condition of Heyden Observatory’s structures and facilities, according to Vice President of Planning and Facilities Management Robin Morey. The results of this study will be used to “inform potential future projects” around Heyden Observatory, according to Morey.

The university’s 20-year campus master plan, which outlines Georgetown’s long-term intentions for the campus, makes no mention of the observatory, saying only that the plan will continue to integrate “conservation-minded initiatives” into campus development to respect Georgetown’s historic setting. The campus plan does not include investment for facilities maintenance, according to Morey, and thus the university will continue to invest in the maintenance of Heyden Observatory as needed.

Creating a Space for Astronomy

The now-neglected Heyden Observatory was not always so run down; the building’s 177-year history has seen a number of astronomical accomplishments and a legacy that continues even today.

Upon its 1841 conception, the Heyden Observatory was not unanimously welcomed; the 1839 construction of the Naval Observatory just a mile away on Embassy Row brought concerns of redundancy.

“Everyone thought it was totally stupid to put another observatory right next to the U.S. Naval Observatory, especially with so few already being in the country,” Astronomical Society President Laura Caron (SFS ’20) said. “But, Fr. [James] Curley, [S.J.], really wanted to make sure there was a place for education and wanted to make sure students always had access to it.”

Curley, an astronomer and Georgetown professor of natural philosophy, established the observatory to bolster astronomy education and research at Georgetown. One of Curley’s most significant accomplishments at the observatory was the 1846 determination of the longitude and latitude of Washington, D.C.

“The building was built exactly so each side was exactly north or south, so Fr. Curley’s telescopes pointed just in the right direction,” Caron said. “He calculated star positions, and from there he could calculate the longitude and latitude.”

In 1888, Hagen installed the 12-inch equatorial telescope — which is still used to this day at the observatory — to ensure the observatory was outfitted for astronomical research. McNally, who took over as director in 1928, expanded the observatory’s work on solar eclipses.

Heyden, who served as the director of the observatory from 1945 until the closing of the astronomy department in 1972, deepened the research into solar spectroscopy and emphasized comprehensive student accessibility. Heyden also originated both graduate and undergraduate astronomy coursework at Georgetown.

“He opened and finished, both the graduate and undergraduate departments,” Caron said. “He had over 90 grad students, and he was always passionate about [how] it was always accessible and that anyone who was interested in studying it could. Some of the first female, black [and] gay astronomers were under him at Georgetown.”

Curley’s hope that the observatory would spur Georgetown students’ education and research held true; many groundbreaking discoveries were made within the walls of the hidden Heyden observatory.

Among these trailblazing astronomers was Vera Rubin (GRD ’54), whose work predicted the existence of dark matter.

Barrows acknowledged how underrecognized Rubin’s work was in the field of astronomy.

“She should’ve gotten the Nobel Prize, but she didn’t, probably for political reasons,” Barrows said. “She was one of the only early woman astronomers; one of the Jesuit directors gave her a chance to become an astronomer, because women were not allowed to be in her day.”

Despite the discoveries and progress made within the observatory, the community’s interest waned. The university shut down the astronomy department in 1972 as light pollution from the growing city made research more difficult, and gave away many of its resources to other institutions in the area.

“In 1972, the university realized that we were running out of money, and they wanted to close the astronomy department,” Caron said. “At the time, the Smithsonian and University of Maryland were both invited to take whatever they want, and so the Smithsonian wanted the map off the globe, so they took the map and left the globe. That might be a metaphor for our story here.”

After its closure, Georgetown offered the entire building to the biology department. However, seeking to preserve the observatory’s history, a group of physics students created the Astronomical Society in 1972. In 1973, the observatory was recognized as a U.S. national landmark in the National Register of Historic Places.

Patrick Seitzer (COL ’74), co-founder of the Astronomical Society, said the observatory served as a hub for graduate students and research at Georgetown before its closure.

“Before its closing in 1971, The Observatory was the Department of Astronomy of Georgetown University,” Seitzer wrote in an email to The Hoya. “My professional career started in that building. I had lots of hand-on experience which served me very well in working at other observatories, and I’m delighted to see it in such good hands today.”

Decades after its closure, the observatory is not only home to the university’s Astronomical Society, but also plays host to other natural science departments, including the biology department, which accesses the lower level and attached classrooms, while the Astronomical Society mainly works with the telescopes in the upper level.

Despite its rich history and continued use today, the observatory is often not well-known among the student body.

“A lot of people don’t know that the [observatory] exists,” Caron said. “We have a dual purpose: to both preserve and talk about the history of the observatory and also to educate people about astronomy and the science more broadly. Our goal in the short term is to get as many people as possible to see the building, because it is a great place, and we want to share that with as much of the community as possible.”