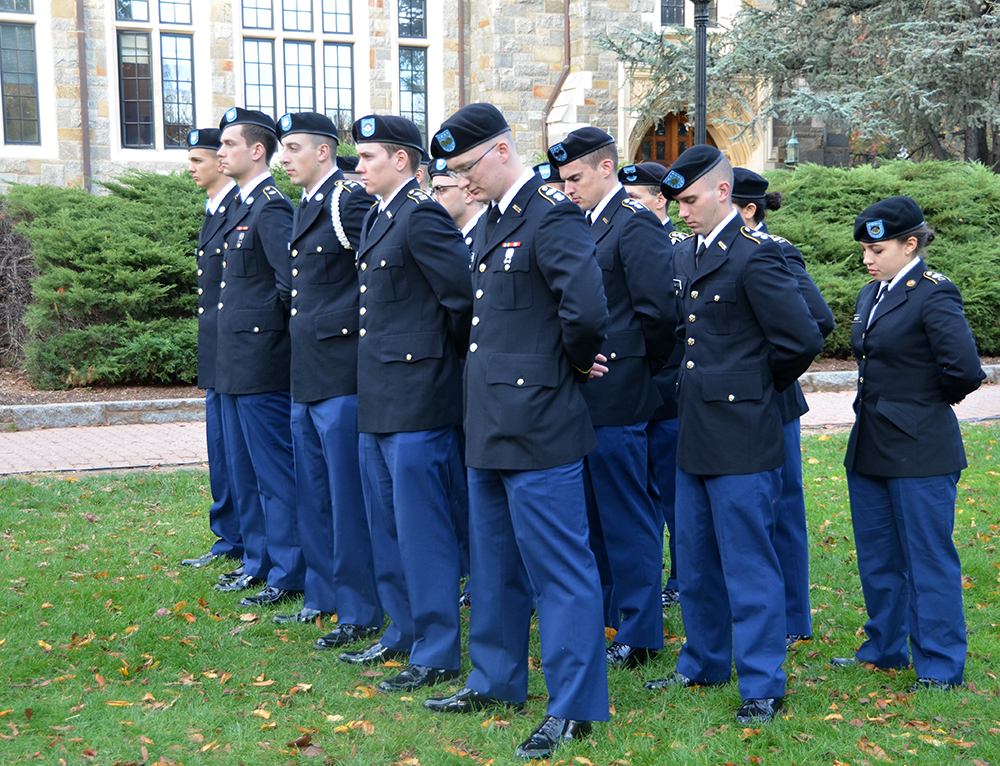 When an earthquake struck Haiti in 2010, Mark Henderson (COL ’17) jumped into action to help survivors. As an enlisted member of the 82nd Airborne Division of the United States Army’s Global Response Force, Henderson and his fellow soldiers at Fort Brag, N.C., were deployed to aid civilians in the Caribbean country.

“I was part of the Global Response Force for anything that happened outside of Iraq and Afghanistan, so we were on alert 24/7,” Henderson said. “I had no real-world experience, and I quickly became immersed in this third- world country.”

Henderson remained in Haiti for 59 days before returning to the United States.

“We were living among Haitians and it really changed my mindset and taught me to be grateful with everything I approached,” Henderson said.

Henderson served in the Army for four years before coming to Georgetown. He is one of 120 student veterans currently enrolled at Georgetown who receive financial benefits from the Post-9/11 Veterans Educational Assistance Act. This program finances a college education for any veteran who has served three years of active duty.

On Sept. 13, Georgetown did not qualify for the U.S. News and World Report list of best colleges for veterans, despite increasingly available resources for military veterans at Georgetown.

This significant drop — Georgetown was ranked first in the nation just two years ago and 16th last year — was due in large part to a technical error, according to Veterans Office Director LeNaya Hezel (“Ranking Reports Mixed Outcomes,” The Hoya, Sept. 20, 2016, A1). U.S. News declined to comment on Georgetown’s lack of inclusion in the rankings.

A change in U.S. News’ process for collecting data and an error in submitting the appropriate number of students receiving GI Bill benefits caused an incorrect number of students to be reported for Georgetown’s submission, according to Hezel.

This has resulted in an active Georgetown University Student Veteran Association membership body and a number of faculty members dedicated to helping student veterans assimilate and thrive. Georgetown also has a Veterans Support Team, a group of students, faculty and administrators interested in veterans’ issues.

Among these resources, GUSVA has developed into an active advocacy organization for student veterans.

Student veteran and GUSVA President Cristine Starke (SFS ’18) said the size and stature of the group has significantly increased over the past few years.

“The GUSVA has become a vehicle to advocate for student veterans’ issues. Veterans on campus have a lot more power now with this organization,” Starke said.

Henderson said joining GUSVA facilitated his transition to Georgetown, a process that challenged his identity ,after having gone through extensive training while joining the Army.

Before Georgetown
For Henderson, enlisting was an opportunity to mature.

“I wanted to be a part of something bigger than myself and had a calling to service,” Henderson said. “I’m from a small town where there aren’t a lot of opportunities to do big things. This was a way to try to get the next level when I had the right mindset.”

The hardest part of transitioning to civilian life for Henderson was adjusting his worldview. Henderson said military life is regimented, and obedience is paramount; soldiers are trained to follow orders, so acting as an individual is not a realistic option.

“I think the hardest part was the lack of your own sense of agency. You don’t really have to think much beyond being told what to do, because you’re told where to be and what to think,” Henderson said. “Maybe that’s why I wasn’t the world’s greatest soldier. I had an officer who told me I think too much.”

After being discharged, Henderson said he was overwhelmed by the options he had. He considered becoming a teacher and a baseball coach.

“I definitely struggled when I first got out,” Henderson said. “A lot of vets go through difficult transitions. Your identity becomes wrapped up in your service, community, uniform and you know who you are and what you’re doing and, all of a sudden, you have this new freedom. I was one of those people. I remember waking up the first few days and wondering what I was going to do.”

Prior to applying to Georgetown in 2014, Henderson had coached a baseball team in his hometown of Lynchburg, Va., then enrolled at James H. Faulkner State Community College, a community college in Alabama, before transferring to the University of South Alabama.

“My first class was an Intro to Gov. course, and from then I knew that I wanted to study government. I wanted to pursue politics,” Henderson said. “It’s kind of ironic to swear to defend a constitution that you don’t know much about.”

Henderson contacted his congressman for an opportunity to intern at his Washington, D.C., office. Once in the District, he applied to Georgetown.

“I sold everything I owned, came up here and moved in with a stranger and fell in love with D.C. and didn’t want to leave and applied to Georgetown on a whim,” Henderson said. “I almost didn’t even apply, because I knew I wouldn’t get in, and then I got an acceptance letter in May [2015], and the rest is history.”

Life at Georgetown
When Henderson joined GUSVA, he met Starke, a Marine Corps veteran who came to Georgetown from a different background. Starke enlisted in the Marine Corps when she was 17 and served as an Arabic linguist and translator for the majority of her time in the military. Starke faced some difficulties applying to Georgetown.

“I got a lot of pushback from my command, and this is true regardless of your job,” Starke said. “I had trouble getting a recommendation from my commanding officers. If they’re trying to keep retention numbers, it’s hard to get out. I had to really advocate for myself in the college application process, because they really want you to stay in.”

Once Starke was admitted to Georgetown, she took the advice of former student veterans and immersed herself in student life: She joined the professional foreign service sorority Delta Phi Epsilon and became part of the OWN IT Summit team for women’s leadership.

Still, Starke said she was not prepared for the stigma associated with being a veteran.

“It’s definitely case by case. Some faculty and administrators are ambivalent, but I feel like many of them are uncomfortable sometimes,” Starke said.

Starke said this environment encouraged her to become involved in GUSVA. As the president, Starke said she wants to help other student veterans in as many ways as possible. This includes providing veterans with similar networking opportunities available to other students.

“At Georgetown, everyone has alumni connections. Some veterans are often not tied into those connections because they transfer in. So I think about how we can get them connected to alumni or tied into various programs on campus they’ve felt excluded from,” Starke said.

Along with advocating for veterans’ issues, GUSVA also plans events and gatherings for both its members and the broader Georgetown community. On Nov. 10, GUSVA will host a Veteran’s Day ceremony honoring student veterans on campus and Georgetown alumni who have served.

GUSVA will also host a panel discussion on Oct. 21 called “Women Who Write About War.” The panel will bring together professional women writers whose work focuses primarily on war. Professor of Spanish and Portuguese Barbara Mujica, who serves as GUSVA’s faculty advisor, will speak at the event.

Mujica is also an associate facilitator of the Veterans Support Team. Mujica played an important role in strengthening GUSVA’s role on campus, especially in the acquisition of a central office for the organization.

“Georgetown was very active in the anti-war movement during the Vietnam War, so I feared that I would not get great reception. But the exact opposite happened. The receptions from the provost’s office, the president’s office, and the dean’s offices were all very supportive and helpful,” Mujica said.

Currently, hundreds of both undergraduate and graduate students make up GUSVA’s membership.
Henderson said veterans should immerse themselves in everything Georgetown has to offer.

“As I got more comfortable, I became involved on campus, which made the adjustment much easier,” Henderson said. “I’ve since made some incredible friends here.”

Like Henderson, Starke said she would urge new students to be resourceful.

“You can’t force a student to use his or her resources or to identify as veterans. That being said, I’d encourage every student here to get involved with anything and everything,” Starke said. “I’d also tell them not to hide who they truly are, either.”

Mujica said she hopes veterans and non-veterans will continue to interact and that the issues surrounding student veterans — including a potential stigma and transitioning to civilian life — will continue to be addressed.

“Student veterans make tremendous contributions to campus life. They’ve been all over the world and really add different and important dimensions to our campus,” Mujica said.

For Henderson, being at Georgetown after serving in the military is a privilege.

“To me, Georgetown is a miracle. Every day I walk up, and I see Healy [Hall]: I have to pinch myself,” Henderson said. “I ask myself if that’s really where I get to spend my time.”