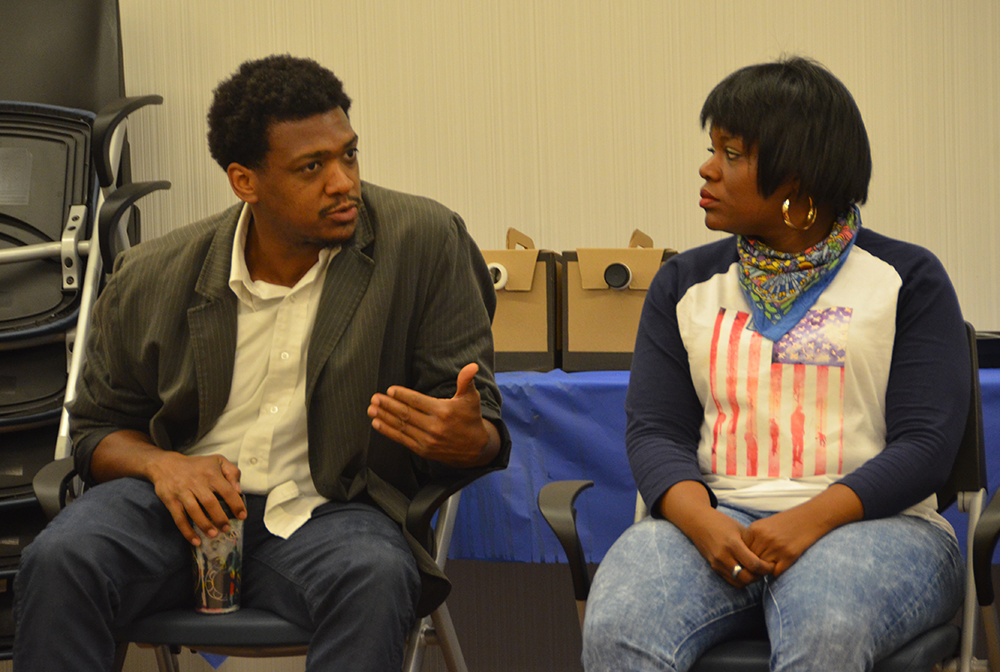 Truth Telling Project Co-Directors Cori Bush and David Ragland spoke about their experiences on the frontlines of the police brutality protests in Ferguson, Mo. Friday morning in the Healey Family Student Center.

The event, titled “The Radical Act of Truth Telling: For Ferguson and Beyond,” was organized by the Georgetown chapter of the National Association for the Advancement of Colored People, the Lannan Center for Poetics and Social Practice, the Justice and Peace Studies Program and the Center for Social Justice.

The Truth Telling Project is an initiative that promotes discussion of structural racism and injustice as a response to the fatal shooting of unarmed black teenager Michael Brown by a white police officer in August 2014 and the subsequent civil unrest in Ferguson.

Aside from the project, Bush serves as a pastor at Kingdom Embassy International, a church in St. Louis, Mo., while Ragland is a visiting assistant professor at Juanita College.

The two were inspired to start the project in November 2014 by the Truth and Reconciliation Commission, a commission set up in South Africa following the abolition of apartheid in 1996.

Bush began the conversation by recalling how the city of Ferguson reacted when news of Brown’s shooting initially broke.

“When I first stepped on the scene it was something like I could have never imagined,” Bush said. “Thousands of people outside in the streets — angry, outraged, not knowing what to do — police dogs, police in SWAT gear. It was a night of horrors.”

Bush said that the protests were a traumatizing experience, which led her to experience flashbacks at the sound of helicopters and dog barks.

“It took me to that combat zone,” Bush said. “It’s in my backyard, streets that I use, officers that I can see if I go to the grocery store and they are in plainclothes. … It’s those people that when they clock in, now those are the ones that have a gun in my face. Those are the ones that are beating my friends.”

Ragland then mentioned how police violence does not align with the principles of democracy.

“It’s sickening that a society that would call itself a democracy would use its military on its own citizens,” Ragland said. “Urban communities in America are under occupation by their own society.”

According to both Bush and Ragland, their participation in the movement came at a personal price. Bush said that she has received violent threats, such as death threats from the Ku Klux Klan, but she said that she refuses to back down in the face of adversity.

“We keep protesting because they keep killing us,” Bush said. “It’s not OK that I have to fight to be free the way a white woman is free. What makes my son different that I have to fight for him to be able to walk out of my home and walk to the corner store and come back safely? Why do I have to fear? That is a reality in my community every day. My son may not come home.”

Ragland called on members of the audience to join the resistance against police brutality.

“Police violence is contingent upon what America approves, and my hope is that the rest of America will begin to understand what happens in some communities and withdraw their consent so that democracy is possible, because police violence wouldn’t happen if white America said we don’t want it to happen,” Ragland said.

Bush also explained how Georgetown students can make a tangible difference in the university community.

“If everybody just here in this university did something, their thing, whatever it is, and used it for social justice … think about how much would change, just here,” Bush said.

Ragland said he was frustrated that the majority of Americans responded passively to the protests.

“America wants reconciliation. America is like, ‘Forgive, shut up and go away,’” Ragland said. “We cannot push people to forgive if they are not ready to, especially if [the police] are still killing us. … America wants to hear ‘I have a dream,’ then go back to sleep.”

Ragland also said reconciliation must involve a direct interaction between the perpetrators and victims.

“It involves a relationship between the perpetrators and the victims. The harm must be repaired and in some cases, reparations should be paid,” Ragland said.

Ragland said that it is important to expose the truth even if it is bitter.

Eliza McCurdy (COL ’17), an attendee of the event, was struck by the intensity of the discussion.

“It was one of the most real, genuine, terrifying, but inspiring things that I’ve done at Georgetown in three years,” McCurdy said. “It pointed out a lot of the issues that are not only present in Ferguson but are present on this campus that we have yet to address.”