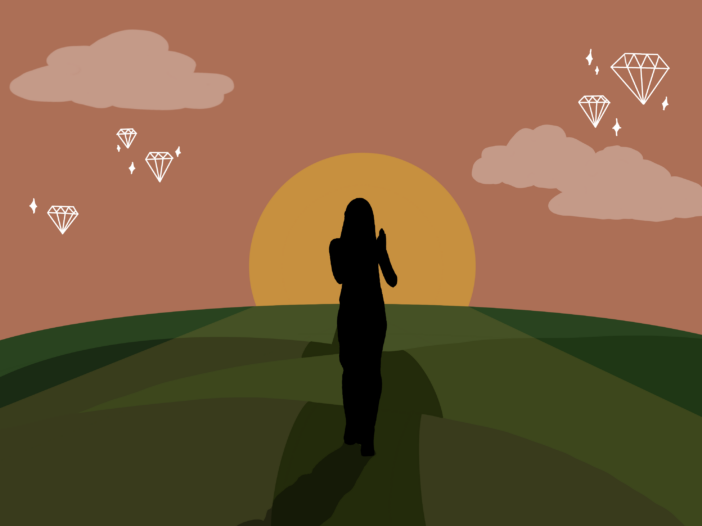 On April 21, the Diamanté Fashion Show returned from a COVID-19 hiatus to host its first show in two years. Combining film, fashion, music and dance, the student-run event challenges the standard definition of a fashion show. Turning the drab McDonough Arena into a sleek runway, Diamanté amazed audience members with stunning models, dancers, a capella groups and even a rap performance.

Under the initial leadership of Kevin Martinez (COL ’20), Diamanté began in 2018 and now has four shows under its belt, according to stage manager Samuel Oni (MSB ’22). Featuring students from Howard University and Georgetown, the models dressed in pieces crafted by local D.C. designers, such as Obioma and Haus of Falenci’ago. Many of the designers also emphasized a commitment to equity and justice in their fashion work, such as Taofeek Studios, which has previously fundraised to support education infrastructure in Nigeria.

Diamanté was designed to fight against hate and bigotry in the United States and beyond, according to the event’s program.

“Historically we pay tribute to these communities: minority, feminist, LGBTQ+, immigrants, first gen and other campus communities,” the program reads. “The show was founded to counteract division and messages of hate and negative media both on campus and in the world that try to stop us as humans from finding ourselves, from climbing our own mountains and standing on our own peak.”

The night, and all that came before, was a grand celebration of different identities at Georgetown and in the community.

Diamanté’s message of tolerance and inclusion was on full display in its fashion, which was a big draw for its performers.

Models such as Ernest Ntangu (SFS ’24) said the experience was a way to connect with African fashion and other students.

“I did something similar to Diamanté in high school as a part of the African Student Association. But coming together to represent these different designers gave me an avenue to get more involved in Washington, D.C., outside of the Georgetown community,” Ntangu said in an interview with The Hoya.

Diamanté featured around 60 models, 30 student dancers and 15 clubs from Howard and Georgetown. The clothing pieces were just as expansive, ranging from notable DMV brands to small businesses, according to Oni.

For Ntangu, this focus on showcasing local brands was vital for the show.

“Especially being from D.C., it is important to show attention to designers around here. Fashion shows are usually focused on big brands, but Diamanté shows the different cultures and people here,” Ntangu said.

During the show, Ntangu wore an African-inspired top with denim jeans from Obioma. In addition, Ntangu planned to wear an outfit from Don Juan, a streetwear designer.

“I really enjoyed the unique approach of the different cultures that Diamanté represented,” Ntangu said.

Oni said Diamanté created an incredible experience for both the audience and its participants, giving them a means of self-expression and community building and bringing fashion and Black culture to the forefront at Georgetown.

“The diversity that we showcased in our pre-show photoshoots was meant to embody what we were going to showcase in the show. We showcased everyone in their fullest regard,” Oni said.

Diamond Glover, a junior at Howard University and another model for Diamanté, appreciated that the inclusive pieces were the main focus of the show.

“I am excited because my clothes are going to be the showcasing moment, where I am not the main center of attention. It is really the piece,” Glover said.

Glover said the experience of modeling highlighted the importance of authenticity in self-expression.

“Coming to college and seeing that people are way more expressive of their styles means a lot to my inner child. Like, okay girl, you can rock that crazy outfit and be okay with it,” Glover said.

Diamanté pieced together a work of art — not only through the clothes, but in every detail of the performance, from the first step of the dancers to the band’s grand finale.

“It’s about the resurrection,” Oni said. “It’s about finding a way to be yourself again. This was a space in which I got to meet other people and form relationships that I hope to keep after I leave here this year.”

Posing for the Camera

While Diamanté was a grand production, the little moments also stuck out for participants and viewers alike.

Oni said this year’s theme, “The Sun Sets to Rise Again,” was a tribute to the show’s halted production and revival after the pandemic.

“The motif of a sun is about bouncing back. It’s about finding yourself and being that new person after COVID,” Oni said. “You’re always in a state of resurrection if you’re trying to grow as a person.”

“Diamanté is a showcase of talent, individuality, ability and diversity. It’s about being yourself to the fullest extent. That’s why we have the name Diamanté, ‘diamond.’ We give the opportunity to showcase these participants’ talents to a larger audience — not everyone’s given that platform all the time, so we aim to be that platform,” Oni said.

Audience member Serena Barish (COL ’25) said the interactions between the models during the show created an experience for performers and spectators that stretched beyond just the clothing.

Models passed, circled and weaved through one another on the runway, drawing the crowd even further into Diamanté’s enchanting magic, Barish said.

This connection between students, both within and across schools, was apparent in the constant support they gave to each other throughout the show; while participants circled on and off stage, cheers of encouragement echoed throughout the arena.

“The moments when two people were walking and they had them stop and interact in some way was really cool because I think that otherwise, it’s a cool outfit but it doesn’t seem that personal,” Barish said. “So I felt like all of the interaction that was showcased was really cool.”

For audience member Devan Shah (COL ’24), the variety of African clothing styles and range of designers stood out the most.

“I saw many different themes highlighted, from traditional African wear, to high fashion streetwear and skinwear. There was a great variety of designers, each showcasing unique and brilliant pieces,” Shah said in an interview with The Hoya.

By focusing on building a community among the show’s participants, Diamanté was able to avoid the sterile, stereotypical professional image often associated with fashion shows.

Laying Out the Runway

Because Diamanté did not have a show in 2021 due to the COVID-19 pandemic, fewer experienced organizers, models and performers were available to participate in this year’s show, according to Oni.

Seeking to recruit extra talent, Diamanté sent out a casting call for models in early February, according to Diamanté’s Instagram.

Logan Castellanos (NHS ’25) answered the call. Castellanos said the audition process as a first-time model was not what she expected it to be.

“We had to walk in heels, which is something I’ve never done before. It’s a bit scary. I didn’t know it was actually runway modeling. I thought it was just picture modeling, so that was kind of a surprise,” Castellanos said in an interview with The Hoya.

Conversely, Glover was able to carry her previous modeling experience to the show.

“I model at home in New Jersey. Aside from that, I have also modeled at Howard doing different fashion shows and homecoming events,” Glover said in an interview with The Hoya.

In addition, Glover noted her excitement with modeling at a different school than her own, especially as her previous mentors participated in Diamanté.

“I am super excited to be doing modeling events outside of Howard, and Georgetown definitely seemed fun. I have heard about the show in previous years, and a lot of the people that coached me modeling participated in Diamanté,” Glover said.

To help create an entertaining show, Glover said she polished her poses to reflect the professional runway setting of Diamanté.

“After being accepted onto the team, being critiqued was very beneficial because modeling comes in a lot of different styles. Coming to learn different techniques was awesome for me because it broadened my horizons,” Glover said.

For Castellanos, learning from those like Glover helped to make newcomers like her become runway-ready by the time of the show.

“We have a lot of girls from Howard here who are actual models, and they were able to give us a lot of tips and show us how to do the steps exactly. I didn’t know that there was actual technicality behind it before I got here, so it was very nice to get step-by-step instructions from them,” Castellanos said.

Coming from Howard to join Diamanté, Glover said the show allowed her to learn in an environment outside of her university.

“It’s definitely fun to model outside of Howard’s campus. It’s added a lot to my own technique, being able to share and critique in a way that’s beneficial for all of us. It’s fun, I loved it,” Glover said.

Ultimately, Barish says that the creators of Diamanté should be proud of their work because their time and effort shone through.

“I think it was really cool to see students who you know and you just pass by every day completely transform into such a glamorous and classy experience,” Barish said.