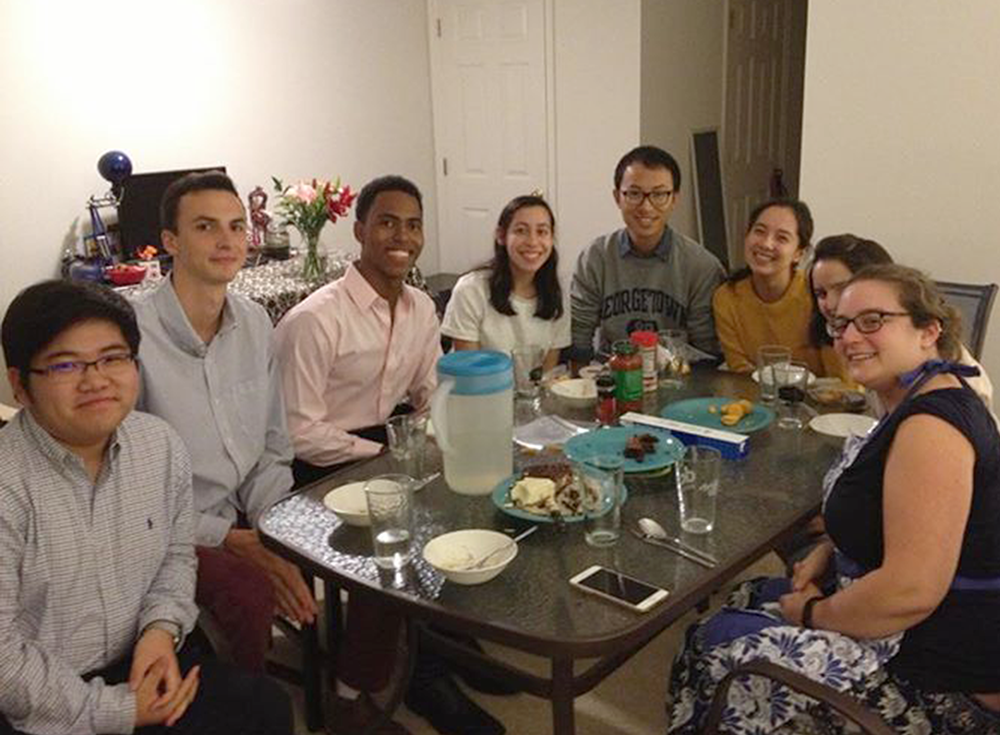 When Janine Karo (COL ’19) walked into her host’s apartment in Arlington, Va., for dinner Sunday evening, she did not have the faintest idea of what to expect.

Over a meal of pasta, she exchanged pleasantries with her host, an alumna interning at the Department of Justice, and six complete strangers from the Georgetown community: a graduate student, a sophomore Arabic major, two self-proclaimed theater geeks and a freshman who had graduated high school in Hong Kong.

By the time the guests were presented with a dessert of homemade brownies and pumpkin spice macarons, Karo felt at ease. The small talk had dissipated and evolved into peals of laughter over an impersonation of one guest’s professor’s French accent, gripes about the bureaucracy behind student employment and speculation about who was behind Dinner With 7 Strangers, the secretive organization that had brought them all together.

While the current coordinators of DW7S maintain their anonymity, the initiative, which organizes dinners for six guests and a host who sign up through its website, has nonetheless gained traction since it first launched its campaign in late February through Facebook and fliers across campus. DW7S relaunched this year, with invitations to sign up for a dinner put up around campus.

Last semester alone, the coordinators organized three dinners per day at its peak to accommodate more than 500 sign-ups from Georgetown students, faculty and staff. In May, The Washington Post featured DW7S in an article, revealing one of the organization’s founders as Lexi Cotcamp (MSB ’15).

Cotcamp, who now works for Google’s Global Security and Intelligence team in California, attended the functions incognito until the publication of The Washington Post’s feature. Her anonymous successors are tasked with overseeing an operation that is funded by the contributions of private donors.

Cotcamp said she started the initiative to promote inclusivity at Georgetown.

“I created DW7S as a way to invite everyone to the table, from freshmen to seniors, from student to professor, from one friend to another,” Cotcamp wrote in an email to The Hoya. “We understand that Georgetown and its organizations can’t accept every person that applies. But truth be told, we believe any Hoya should have a standing invitation to dinner. ‘You can’t sit with us’ is great in ‘Mean Girls,’ but not so much at Georgetown. Exclusivity isn’t our style.”

Cotcamp said she hopes the dinners are meaningful experiences for guests.

Karo was first drawn to DW7S after her mother showed her The Washington Post’s article, which was published several weeks after she committed to Georgetown. She resolved to attend a dinner upon her arrival on campus in order to bolster her interactions with other students.

“It was really interesting to me to hear about how someone had just decided to make all these students meet, and I just felt that Georgetown’s a big school, and it’s hard sometimes as a freshman to click and meet new people,” Karo said.

Unlike Karo, Zachary Currie (COL ’18) accidentally ended up at his DW7S dinner Sept. 27, filling in for a friend who was originally supposed to attend.

“The [host] really gave me some incredible advice about my years at Georgetown, like ‘Don’t burn any bridges’ or to only follow professors if you like them, not necessarily if you like their class,” Currie said. “It was a great experience because everyone was very nice and genuine.”

College Dean Chester Gillis, who attended a dinner last semester, said that the experience provided him with insights about student culture. Gillis himself regularly hosts dinners for students of the College at his own home, but said that DW7S allowed him to interact with students from the other schools.

“It’s interesting in my point of view because it gives me a clue or a sense about what students are engaged in, what students are passionate about, whether they’re interested in the conversations that we had and even the differences among students,” Gillis said. “As we sometimes say, there’s no singular Georgetown experience, there’s multiple Georgetown experiences for different students in different ways, and those who don’t interact with one another get to live them out on this one occasion.”

For sociology professor Sarah Stiles, who attended a dinner in Burleith last April, DW7S not only fosters a more cohesive community, but also provides a memorable personal experience.

“Mixing up these groups helps develop empathy, which is something we need to move forward as productive members of society,” Stiles said. “Our little bit of Georgetown Hoya culture is just a little bit of the whole, but people need to know how to hang out with people who are different than them.”

Ultimately, Cotcamp said while every dinner is different, each contributes to the understanding that everyone at Georgetown is “cut from the same cloth.”

“I’ve had people break out into song at dinner,” Cotcamp wrote. “I’ve witnessed emotional freshman and seniors with more sass than you can imagine. I’ve had alumni ask if they could celebrate their 50th birthday by attending DW7S. Every dinner is different. That’s the beauty of it.”