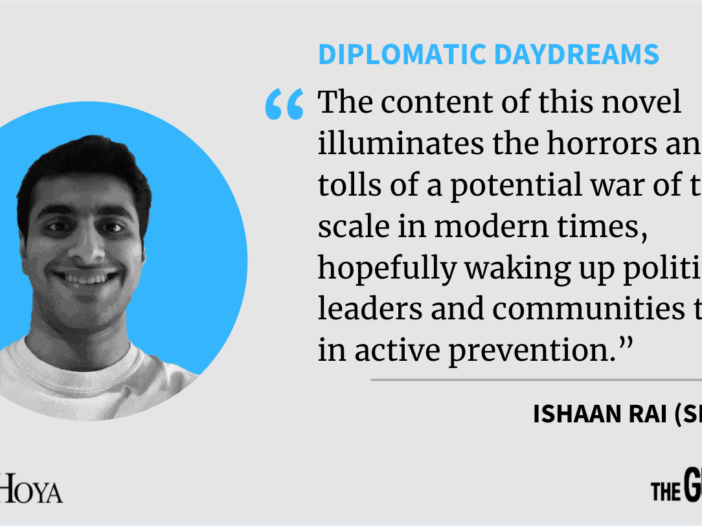 Diplomatic tensions between the United States and China have never been higher.

Trading insults at an Alaska foreign policy summit in March 2021. The Biden administration’s condemning of the treatment of Uighur Muslims in Xinjiang as genocide. Even proposals to boycott the 2022 Beijing Winter Olympics from congressional leaders: These are just some of the flashpoints signaling a new era of international politics, an era no longer dominated by the unchallenged might of the United States, but rather characterized by tensions stemming from the rise of China on the international stage.

Many worry where such tensions will end, whether trade wars will escalate into broader economic sparring or if global alliances will be reshaped along the lines of previous Cold War factions. The worst possibility, however, is an outright military conflict, which would redefine global political landscapes for years to come and transform the lives of hundreds of millions of citizens.

Amid all this anxiety and uncertainty comes a novel that expertly illustrates the darkest future between the United States and China. “2034,” co-written by Purple Heart recipient Elliot Ackerman and retired Navy Admiral James Stavridis, paints a grim tableau of how a U.S.-China global conflict could actually begin and play out.

But what makes the novel truly interesting and elevates it beyond just an airport bookstore read are its deeper messages that attempt to warn Americans about the potential grim future of the international system.

In the novel, the United States has fallen far behind China in technological advancement and cyber warfare innovation. When American and Chinese fleets face off in the South China Sea, China deploys advanced hacking mechanisms that completely disable U.S. technology and computer communications, which leads to a devastating massacre for the U.S. This brutal engagement begets a major question explored throughout the novel: How did America fall so far behind China in the future?

In “2034,” the U.S.-China war is set off by this incident in the South China Sea and a concurrent crisis in Iranian airspace, where a series of diplomatic miscalculations escalate into an all-out military engagement. Narrated like a thriller, Ackerman and Stavridis’ prose is highly effective because of its quick pacing and shocking plot turns. However, the book does suffer from its short length at times, as it fails to give certain jaw-dropping moments the necessary space to simmer.

Ackerman and Stavridis also struggle with character construction, as the rotating narrative voices are either engaging or not. For example, Indian American White House staffer Sandeep Chowdhury is a deeply empathetic and interesting character, as he seeks to stop the conflict from unfolding further in an effort to protect national security. Yet fighter pilot Wedge Mitchell, another narrator, maintains a far too comical and obnoxious attitude for the serious nature of the novel’s tone.

The book is never explicit as to why China overtook America in technological advancement, but it does provide some clues. One major plot focus is the political dysfunction in America, where the president in the novel follows what the authors describe as a “one-term Pence presidency,” an ambiguous term used to describe new and unconventional reelection trends, and it is the first independent ticket elected to the office since George Washington.

The implied seismic shifts in electoral norms hint that internal divisions and polarization, topics that dominate political discourse today, have prevented the United States from organizing a national strategy to compete with the rising power of China, a longtime leader of technological innovation.

The United States in this timeline has also failed in its international commitments, as the novel’s depiction of intergovernmental organizations like NATO and the United Nations are weak and ineffective, continually failing to stop aggression or bring about negotiations. In this future, America has adopted a do-it-alone attitude, continuing to adhere to an America First ideology, propagated in recent years by former President Donald Trump. Much of the novel’s narrative is predicated on initiatives from the Trump presidency, drawing heavily on the administration’s policy to show the evolution of ineffective diplomacy.

In a discussion about the novel, Stavridis articulated that he and Ackerman wrote the novel as “cautionary fiction,” rather than a “predictive” story. From this perspective, the authors would likely approve of President Joe Biden’s foreign policy directives, as he has defined competition with China as America’s primary challenge in the 21st century. Biden is determined to avoid an outright conflict though, and he has stated that he will work with key allies in NATO and other international institutions to accomplish his goals.

But the big questions remain. Will the United States succeed in containing China without warfare? And if so, how?

We will have to hope that this global conflict can be avoided in order to prevent the dark future depicted in “2034.” The content of this novel illuminates the horrors and tolls of a potential war of this scale in modern times, hopefully waking up political leaders and communities to act in active prevention.