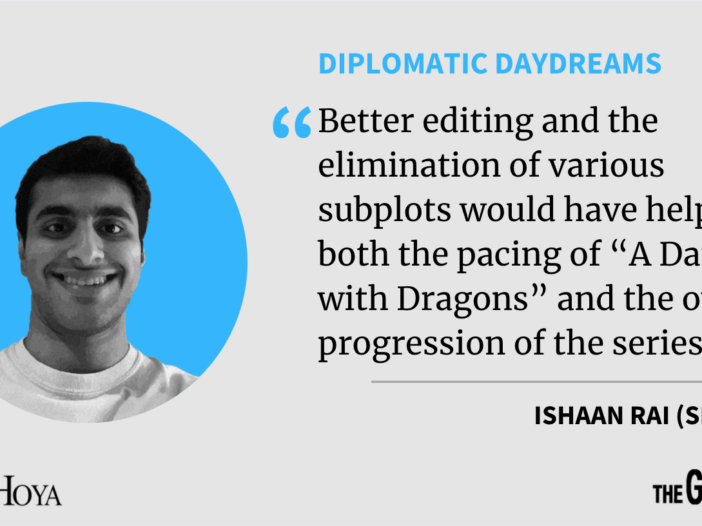 While 2011 was a year of optimism and excitement for fans of the “A Song of Ice and Fire” series, 2021 is a year of disappointment and intense worry.

In July 2011, fantasy author George R. R. Martin released his fifth book in the series “A Dance with Dragons.” The novel is part of an epic fantasy franchise that depicts the story of warring noble families fighting for the throne of the fictional state of Westeros. The novel was hotly anticipated, as its popularity was boosted by the airing of the acclaimed first season of the series’s television adaptation, “Game of Thrones,” on HBO just a few months before.

The promised sixth book, “The Winds of Winter,” has yet to be released, and the final season of “Game of Thrones” landed with a thud in 2019, producing mediocre critical reviews and an intense fan backlash. In reexamining “A Dance with Dragons” on its tenth anniversary, the book continues to be rich in themes but also rich in bloat, revealing that within those pages was where Martin lost track of his greater series narrative.

The “A Song of Ice and Fire” series is known for its intricate alternating point of view structure, gory fights and copious character deaths. While “A Dance with Dragons” possesses those same elements, it also attempts to remedy the mistakes of its disappointing predecessor, “A Feast for Crows,” which received heavy criticism for its focus on tedious side character arcs.

In “Dance,” Martin continues the stories of the main characters largely left out of “A Feast for Crows,” especially those of the franchise’s three most popular characters: Jon Snow, a nobleman’s bastard son and the newly minted leader of the northern border of Westeros; Daenerys Targaryen, an exiled princess attempting to amass an army to conquer Westeros; and Tyrion Lannister, the dwarf noble who has fled the capital city of Kang’s Landing, seeking to join Daenerys after killing his own father.

The previous four books also placed special emphasis on themes like the value of honor and the futility of war, and “Dance” is no different in this regard. In the story, the theme of leadership remains the most pronounced, as the narrative finally sees protagonists Jon and Daenerys step into such roles after years of trial and hardship.

Torn between his duties on the northern border of Westeros and his family’s political struggles further south, Jon must balance the competing threats of political upheaval and the slow encroachment of the Others, a mysterious race of ice creatures who raise the dead and wish to drag the world into an eternal winter. Daenerys, on the other hand, struggles as she learns the ways of queenship in the eastern city of Meereen, attempting to balance compassion with ruthlessness, complicated by her desire to avoid becoming like her tyrant father.

While the parallels between Jon’s and Daenerys’ leadership arcs remain strong, it is Jon’s story that remains compelling throughout, while Daenerys’ narrative plods into mundanity until the final chapters. Herein lies the biggest problem with “Dance”: its pacing and planning.

“Dance” encounters these pitfalls because the narrative is stuffed with a staggering sixteen different points of view, and Martin’s proliferation of POVs and subplots has hampered the progress of the series, making it too unwieldy even for the 72-year-old author to finish. Better editing and the elimination of various subplots would have helped both the pacing of the book and the overall progression of the series. This would also have reduced the agonizing wait for the final book in the series, which was made worse by the fact that “Dance” ended on multiple cliffhangers.

In the year 2021, the “A Song of Ice and Fire” franchise ultimately remains at a crossroads. Many fans are looking to Martin to redeem the story after the botched ending of the “Game of Thrones” series, but as of now, he has proven unable to deliver with “A Dance with Dragons.” If the sixth book turns out to be as uneven and tedious as its predecessor, fans may find themselves disappointed yet again.