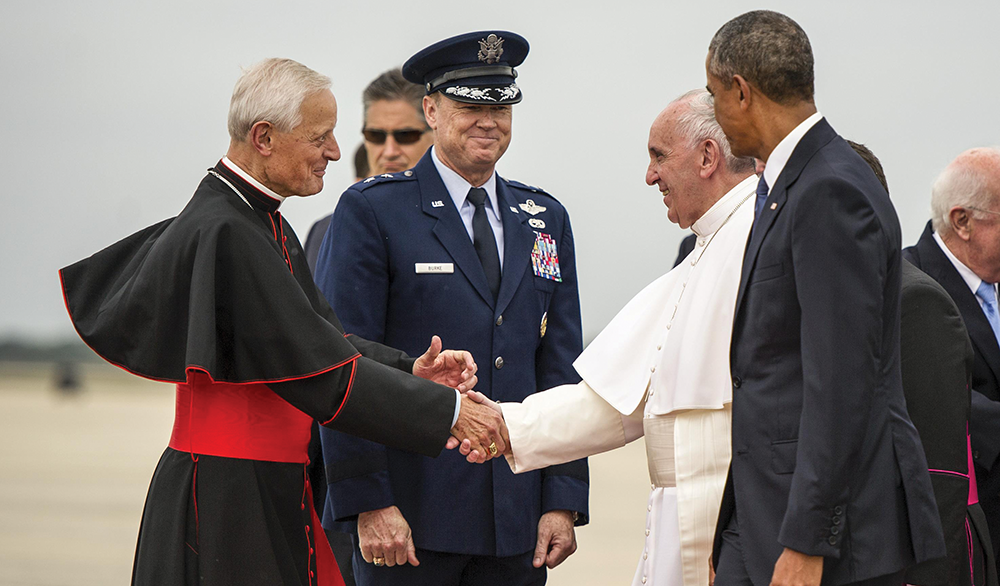 Washington, D.C. Attorney General Karl Racine and other prominent Catholics in the city are calling for the Archbishop of Washington Cardinal Donald Wuerl to resign due to his handling of past sexual misconduct cases.

Formerly the bishop of Pittsburgh, Wuerl has been accused in a grand jury report of covering up decades of systematic abuse and sexual misconduct within the Catholic Church.

Wuerl was presented with an honorary degree from Georgetown University in 2014 and has since then spoken at the university several times, including twice in the fall of 2017.

Catholics in the archdiocese and beyond are demanding a response for these findings, which show a lack of action by prominent members of the Catholic Church. More than 40 Catholic school teachers protested for Wuerl’s resignation outside the Mass at the Basilica of the National Shrine of the Immaculate Conception on Tuesday. Other groups of protesters have also demonstrated outside Wuerl’s home and Sunday Mass at St. Matthews Cathedral, according to The Washington Post.

Trinity Washington University President Patricia McGuire has been the first leader of a Catholic college to publicly call for Wuerl’s resignation.

Pope Francis requested that McCarrick resign after an investigation conducted by the Archdiocese of New York found certain accusations credible. Wuerl denied having knowledge of McCarrick’s abuse during his tenure as the archbishop of Washington until after the accusations this summer.

In a separate investigation, the Pennsylvania attorney general’s office released a grand jury report Aug. 14 revealing sexual abuse by 300 priests over the course of 70 years in the state.

Wuerl’s name is mentioned 200 times in the report, which describes his mixed record in responding to accusations against abusive priests.

Following the release of the report, former Vatican diplomat to the United States Archbishop Carlo Maria Viganò published a 7,000-word letter Aug. 22 that called for the resignation of Pope Francis, accusing him of covering up McCarrick’s abuse.

In his letter, Viganò also accuses Wuerl, a key ally of Pope Francis, for lying about the point at which he became aware of McCarrick’s sexual misconduct.

Ed McFadden, a spokesman for the cardinal, denied that Wuerl had knowledge of McCarrick’s misconduct, according to Catholic News Agency.

“Cardinal Wuerl did not receive documentation or information from the Holy See specific to Cardinal McCarrick’s behavior or any of the prohibitions on his life and ministry suggested by Archbishop Vigano,” McFadden said.

Since the outpouring of accusations, Wuerl’s publishing company cancelled his upcoming book release and officials are considering removing his name from the high school of his Pittsburgh hometown.

Bishops are appointed by popes, and therefore it is rare for a bishop to resign without the resignation of the pope having already taken place.

It is unlikely that Wuerl will resign based on precedent in the Catholic Church, according to Marie Collins, who served on a papal commission on clergy and the sexual abuse of children and is an Irish abuse survivor.

“Until recently, bishops would not have considered resigning,” Collins told The Washington Post. “It’s just not in the culture of the church to fall on your sword. Within the church that would be seen as strong punishment, even though looking from the outside, I believe they should have to pay a much higher penalty.”