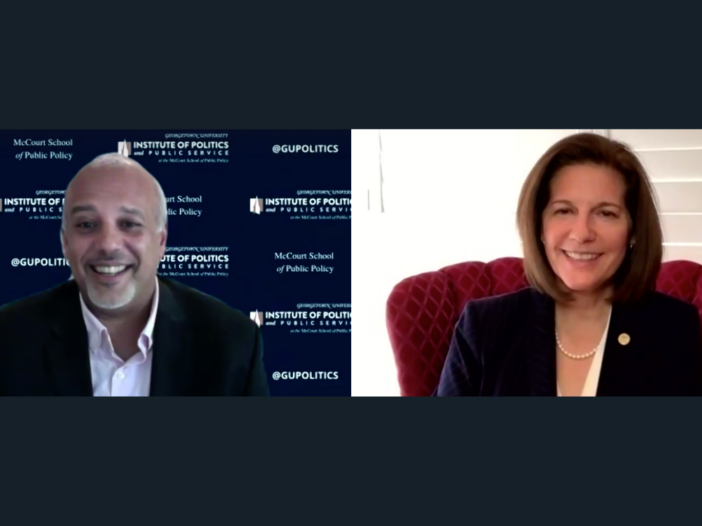 Public officials have a responsibility to account for all perspectives and identities by giving them a place at the table in government, Sen. Catherine Cortez Masto (D-Nev.) said in a virtual conversation with the Georgetown Institute of Politics and Public Service on May 28.

The day of the event, Cortez Masto, who had previously been considered as a potential running mate for presumptive Democratic presidential nominee Joe Biden, announced she withdrew her name from consideration.

Cortez Masto spoke with GU Politics Executive Director Mo Elleithee (SFS ’94) on the importance of diversity in politics. Conducted over Zoom, the conversation, titled “Diverse Leadership: Why It Matters,” was streamed on GU Politics’ Facebook and YouTube and was co-sponsored by the Georgetown Bipartisan Coalition.

Nevada ranks among the most culturally diverse states in the country. Diverse constituencies require diverse representation, according to Cortez Masto.

“If we’re going to pass laws in this country that really address the issues we are all dealing with or trying to solve problems we’re dealing with, then we need that diversity around the table when we’re making those decisions, when we’re crafting that legislation for those laws, because otherwise, people are going to be left out,” Cortez Masto said.

When Cortez Masto was elected in 2016, she became the first Latina to serve in the U.S. Senate and the first female senator from the state of Nevada.

Her ability to voice the concerns of her community at the highest levels of government is more important than the milestone itself, according to Cortez Masto.

“I realize that my election was historic, and that’s great to make history,” Cortez Masto said. “But to me, the most important part is now I can be at the table, a voice at the table, have a seat there when we’re addressing legislation that I know impacts people in my community.”

Effective political leadership also derives from an ability to connect with constituencies and demographics of different backgrounds, Cortez Masto added.

Cortez Masto also touched upon recent popular unrest provoked by the deaths of George Floyd, Breonna Taylor and Ahmaud Arbery. Meaningful change surrounding racial injustice in the United States will only follow a “paradigm shift” in engagement with the issue, according to the senator.

“This is completely outrageous to me that you have a man of color who can’t jog down the street, or a woman sleeping in her bed is killed or what we saw recently in Minnesota with George Floyd—it’s outrageous,” Cortez Masto said. “It mandates justice, but at the same time it also mandates us all not to sit back and say ‘here it goes again.’ We need a paradigm shift here. We need to recognize that it’s happening and figure out what we’re gonna do about it.”

The senator also took aim at President Donald Trump’s response to the protests and pandemic policies. According to Cortez Masto, Trump’s desire to end the Affordable Care Act, despite the global pandemic, demonstrates the need to protect at-risk populations and minority groups.

“Every time we think that we make one step forward in addressing any type of discrimination or a barrier to getting access to healthcare or any type of relief to individuals, someone is going to come along and try to take it away,” Cortez Masto said.

To ensure that the government and legislation work in the best interest of voters, legislators at every level of government must be composed of a diverse group of people who are able to fairly represent the needs of their constituents, according to Cortez Masto.

“So many of our communities are being discriminated against,” Cortez Masto said. “How do we expect them to address those issues unless we’re there in the room making those decisions?”