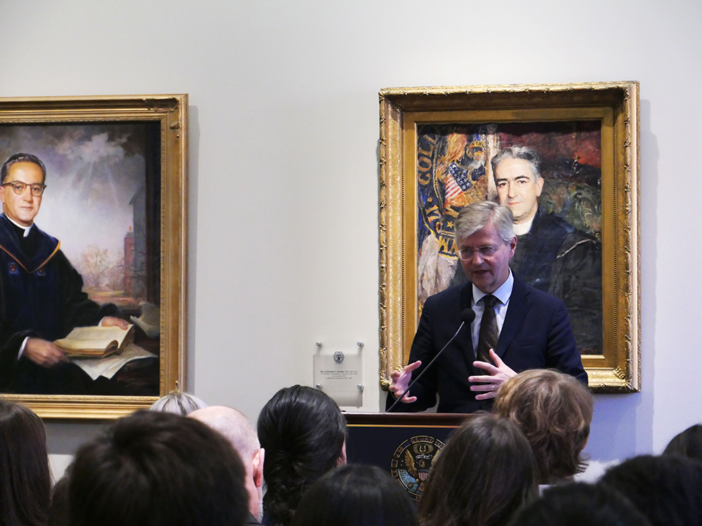 Jean-Pierre Lacroix, Under-Secretary-General for Peace Operations at the United Nations, spoke about the challenges and misconceptions of UN peacekeepers at an Oct. 21 event.

In his address, Lacroix spoke about both the goals and complexities that peacekeeping operations face around the world.

“Ultimately it’s about supporting peace and creating conditions for durable peace to prevail,” Lacroix said. “No matter what the mandate is and no matter what peacekeeping operation you’re looking at.”

Lacroix stressed that this aspiration is not something that UN peacekeeping missions can achieve alone. Rather than conducting these missions on its own, the UN is intended to support international partners and efforts, according to Lacroix.

“I think of peacekeeping as a bunch of people with blue helmets, women and men in uniform with the blue badge of the UN or the blue beret,” Lacroix said. “But it’s essentially a political proposition. It’s about supporting peace efforts.”

The event, held in the Healy President’s room, was jointly sponsored by the School of Foreign Service, the Master of Science in Foreign Service program, the African studies program, the Mortara Center for International Studies, the department of government and the M.A. in Conflict Resolution program. Government professor Lise Howard, introduced Lacroix.

“Often time humanitarian aid work is supposed to remain independent and neutral and impartial,” Fernandez said in an interview with The Hoya. “However, this talk really discussed the collaborative efforts between peacekeepers and states in order to sustain peace.”

In its 2019 annual report, the UN underscored the need for action to prevent global trends such as the rise of regional violence, terrorism and violent extremism. During 2018 alone, nearly 71 million people were displaced as a result of violence and persecution, according to the report. The year 2018 also marked the 70th anniversary of UN peacekeeping.

Promoting international cooperation and partnerships is the number one challenge he faces, according to Lacroix.

Looking back at the history of the UN’s peacekeeping missions, Lacroix believes there is still work to be done to shift international perception of these UN peacekeepers.

“To our member states of the UN, to all who have an interest in peacekeeping, there has to be a right understanding of what peacekeeping operations are,” Lacroix said.

Learning about the UN peacekeeping operations in the context of different countries is important because it involves individual motives of leaders, according to Rolf Niederstrasser, a first-year graduate student in the MSFS studying Latin America.

“Whenever the UN is present, there is some time of stability, like [Lacroix] was saying,” Niederstrasser said in an interview with The Hoya. “But also what might be the motive behind a president not wanting to have the UN there?”

While there are examples of the UN successfully ensuring stability in a region, there may be flaws in both how UN peacekeepers are viewed as well why they are deployed, Niederstrasser said.

“We see them as a force of good, but sometimes it didn’t happen,” Niederstrasser said. “Seeing that perspective, from what are their limits, what types of other organizations might resolve it better and does a country have the capacity to do it on their own.”

Howard also stressed the importance of recognizing the successes and failures of past peacekeeping missions when considering the future of the UN, she said.

“I started by saying it’s not so bad and we heard at the end that there are some places where it’s really not working so well,” Howard said. “We acknowledge and try to learn and try to figure out a path forward. That involves you. That involves young people thinking very deeply and seriously about how to help.”