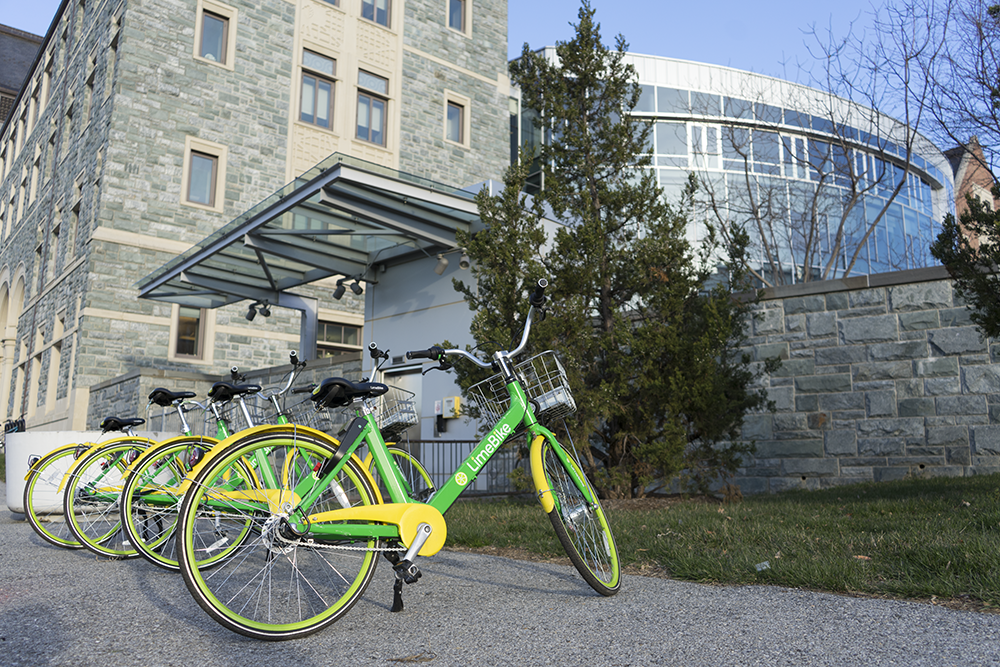 Thirty-five bright green bikes are available for pickup at 12 on-campus locations as part of a new collaboration launched Tuesday between Georgetown University and the LimeBike dockless bike-share program.

Under the partnership, students who sign up with a university email account can receive a rate of 50 cents per 30 minutes from LimeBike, a 50 percent discount from the regular $1 rate. The bikes are distributed for riders to pick up and are restocked nightly to ensure their availability.

The university’s partnership with LimeBike was signed in January and marks the newest addition to on-campus sustainable transportation options, joining the existing Capital Bikeshare station outside the university main gates at 37th and O Streets. The LimeBikes were initially deployed over spring break.

LimeBike is one of a slew of bike-share companies that do away with bike docking stations. Instead, riders can use a mobile app to locate and unlock bikes with the tap of a button. Bikes are available across campus at Alumni Square, Lauinger Library, Red Square, the Leavey Center, O’Donovan Hall, the north and south sides of Kennedy Hall, the Rafik B. Hariri Building, the West Campus bus turnaround, Darnall Hall, Regents Hall and the Medical Center.

The university does not compensate LimeBike for the provided on-campus services.

Georgetown aims to further its support of bicycling on campus through this partnership, according to Sustainability Metrics and Project Manager Greg Miller. In 2013, Georgetown was designated a “Bicycle Friendly University” by the League of American Bicyclists, which recognizes institutions of higher learning for their promotion of bicycling as a preferred means of transportation.

“With this new partnership, Georgetown continues to demonstrate ongoing leadership on bicycle-friendly initiatives in D.C.,” Miller wrote in an email to The Hoya. “This new affordable option makes it easier for students, employees and visitors to choose healthy and sustainable mobility options.”

Miller said the number and locations of the bike parking sites are subject to change.

“The 12 initial pick-up locations were chosen to maximize coverage across high-traffic destinations across the main campus,” Miller wrote. “Pick-up locations and the number of bikes available may evolve as the University evaluates how the service is used.”

Day-to-day maintenance such as bicycle restocking will be managed by LimeBike, according to Miller.

LimeBike was one of four companies to launch dockless bike-share programs in D.C. last September. The company announced Tuesday it would also provide riders with the option of electric scooters.

The university partnership was a natural next step in the company’s plans for expansion in the District, according to LimeBike D.C. General Manager Jason Starr.

“We have continuously sought natural partners to help expand ridership to communities where convenient, cost-effective and environmentally friendly transportation options can be an asset,” Starr wrote in an email to The Hoya. “Georgetown was a natural fit because of its location within D.C., its active and engaged student body and its reputation as a nationally leading academic institution.”

A potential expansion of the partnership would depend on the community’s response, according to Miller.

“Georgetown is committed to providing safe, affordable and carbon-free mobility options for the entire campus community,” Miller wrote. “Future expansion of the program will depend on the demand for the service and the feedback from the campus community.”