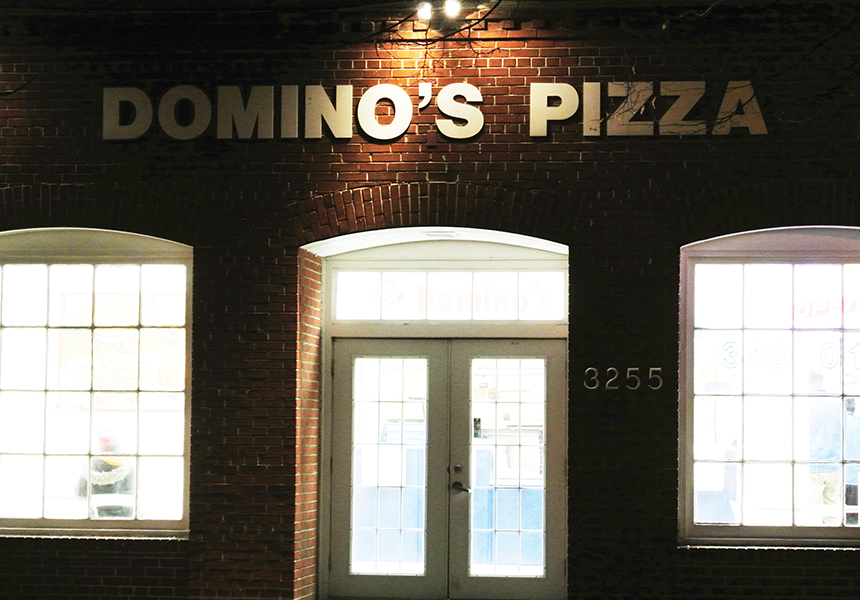 Three Domino’s Pizza employees were held at gunpoint in an armed robbery early Monday morning in which suspects stole $3,000 worth of money and goods from the restaurant in a manner that has led some employees to suspect it may have been an inside job.

The robbery took place at 1:43 a.m., as Domino’s staff were preparing to close the restaurant at 2 a.m. At the time of the robbery, there were two delivery men and one manager inside the establishment, located at 3255 Prospect St. NW. No patrons were present, and no one was seriously injured.

This is the second armed robbery that has occurred in the Georgetown neighborhood in recent weeks, after a student was robbed while walking near 3500 O St. on Jan. 21.

Mohammed Farhan Tai, a Domino’s driver, was in the back of the store washing dishes when men entered the store.

“Last night I was doing the dishes, washing, and then one person, then two people came in the back, and they had guns. They said, ‘Come inside the room’ where the safe was. And another person came and they said, ‘Open the safe, open the safe’ and I said, ‘I don’t know how to open it, I’m just a driver,’” Tai said.

According to Domino’s employees, the main safe is on a timed lock and can only be opened by the general manager, who was not in the store at the time. When the burglars learned of this information, they began to steal personal items and delivery tips, as well as money left in a smaller safe and cash register, which totaled to the estimated $3,000.

“I had money in my pocket and tried to save it,” Tai said. “They saw me and kicked me and took all my money, then one more guy in the front dragged the guy from the front all the way to the back with his hair. They took his phone. … They walked around and they said ‘Give me all the money.’ I gave all of my pocket money, and in five to seven minutes they went away.”

Tai had left his phone in the car that night. After the men left, Tai called the police, who arrived in around five minutes.

According to a Domino’s employee who asked to remain anonymous, the burglars were very knowledgeable of the operations and layout of the store.

“I thought it was maybe somebody inside. The way that they knew the operations and what time they knew everything was going to be done. Maybe they weren’t the ones that actually robbed, but they had to be the brains of the operation. … It doesn’t sound right,” the source said.

Woody Tongrugs, manager of Mai Thai, located down the street from Domino’s at 3251 Prospect St. NW, said he was not concerned about his own store being robbed, and that crime like this is unusual in the area.

“Maybe somebody snatched a purse about a year ago, and then some drunk kid ran down a tree,” Tongrugs said of crime at Mai Thai. “We have a security guy here 24 hours, and we also have a security camera outside here. … Domino’s is a little bit farther away from the security, so that’s maybe why it happened.”

Conversely, Christian Liberman, who works at Booeymonger’s at 3265 Prospect St. NW by Domino’s, said that crime is common in the neighborhood.

“It’s a combination of factors. The economy is pretty rough right now for a lot of people. They’re out of work, and I think probably robbing or stealing is a quick and easy way to make ends meet,” Liberman said.

Liberman attributed the recent occurrence to the seemingly cyclical nature of crime in Georgetown.

“I’m not too personally concerned. I grew up in the area, and it goes through cycles. Georgetown isn’t insulated despite the properties’ values and the fact that the university is here,” Liberman said.

According to Georgetown University Police Department Chief of Police Jay Gruber, MPD will investigate this crime.

“It’s the MPD’s jurisdiction, so they’ll take the lead in the investigation. Our officers have descriptions of some of the individuals in the robbery, so we’ll definitely keep an eye out, but again it’s the MPD’s primary responsibility to investigate that crime.”

Gruber said that his officers will not change the way in which they patrol the neighborhood, since the robbery was not in close enough proximity to the university.

“Our officers who work in that beat that includes LXR, Walsh, Nevils and Alumni Square need to be diligent, and at our briefings we give out the descriptions of these people,” Gruber said.

Gruber urged students to remain vigilant of their surroundings when walking in the neighborhood.

“I think our students always need to be diligent when they’re outside of the gates of campus,” Gruber said.