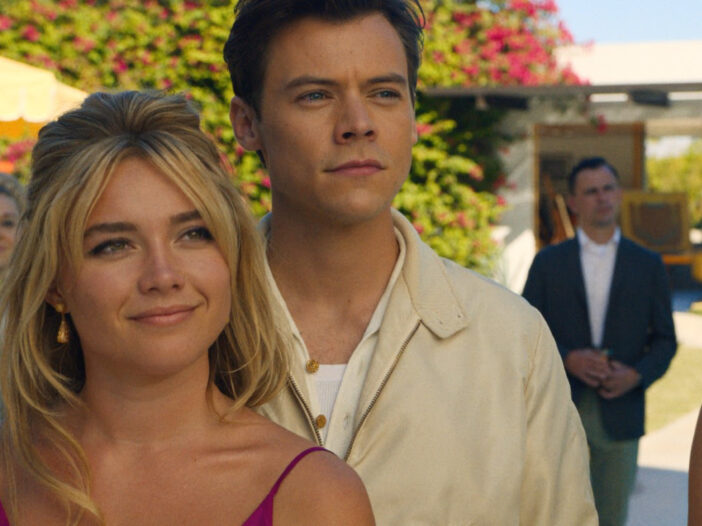 Despite the nonstop press surrounding drama during filming, “Don’t Worry Darling,” Olivia Wilde’s sophomore directorial feature film, starts out strong. However, the dazzling production design and a powerhouse performance from Florence Pugh cannot save the film from its wildest ambitions.

However, the facade of Alice’s ostensibly perfect life begins to crumble following a harrowing encounter with her friend Margaret (KiKi Layne). Despite repeated assurances from her adoring husband Jack (Harry Styles) that she has nothing to worry about, Alice quickly begins to question her surroundings.

Victory’s suburban utopia, of course, proves too good to be true. But the film gives the audience almost no time to digest the picturesque setting before it all burns.

The period between Alice questioning the Victory Project and actually getting answers is excruciating, which renders the film highly repetitive. Alice continually questions her world, but little information is provided to Alice in the first act, leaving the viewer feeling stalled and frustrated.

That said, even if much of the film can feel purposeless, the film is never ugly. Regardless of Wilde and Katie Silberman’s nonsensical script, the entire production team on “Don’t Worry Darling” deserves nothing less than a standing ovation.

From beginning to end, the film is a visual feast, with every department taking full advantage of the artistic opportunities presented by the period setting. The oasis paradise of Victory is perfectly designed, which, combined with Wilde’s tight direction, makes the visual aspects of the film excellent.

However, one cannot discuss the high points of “Don’t Worry Darling” without mentioning Florence Pugh. Occupying the majority of screentime, Pugh delivers a performance that matches, if not exceeds, the lofty highs of her career.

Even when the film drags, Pugh herself remains electric and consistently compelling, particularly in contrast to the often less than standout performances of many of her co-stars — Styles in particular.

While many have thoroughly lambasted the pop-star’s performance, and almost too much, Styles certainly earns no laurels. The only actor operating on the same level as Pugh is Chris Pine in the role of Frank, the charming and enigmatic leader of the Victory Project.

In fact, one of the film’s most thrilling scenes comes as Pugh and Pine spar at a party, while the rest of the cast, including Wilde, do little more than gawk. But with the exception of Pugh and Pine, the actors in “Don’t Worry Darling” fail to deliver anything of particular value.

Regardless of its gorgeous packaging, the plot of “Don’t Worry Darling” is severely lacking. While its poorly paced story with numerous unfulfilled subplots is damaging enough, the film fails to extensively develop its themes.

Wilde firmly declared that the film centered on themes of female pleasure, promising a feminist message. But given this statement, Wilde’s commentary is simplistic, directionless and frankly limp at best — and certainly not feminist.

Through a series of baffling and completely unexplained story choices in the final 30 minutes of the film, Wilde attempts to deliver the radical feminist message she promised. Other than a general stance against incel culture, the limitation of women to the domestic sphere and female gaslighting, the film fails to say anything unique — let alone groundbreaking — about modern feminism.

Wilde’s commentary is neither as cunning nor as cutting edge as she believes. Given the elaborate amount of waiting required before these grand statements reveal themselves, Wilde’s ultimate point fails to make much of an impact besides the shock value of the twist which delivers it.

While “Don’t Worry Darling” is one of the most visually pleasing films of recent memory — and houses yet another masterful performance from Florence Pugh —  its unsatisfying plot and half-baked themes make everything else meaningless.

“Don’t Worry Darling” is perhaps worth seeing for those intensely curious to know the film’s secrets, but it is certainly not the poignant, emotional masterpiece Twitter would lead you to believe.