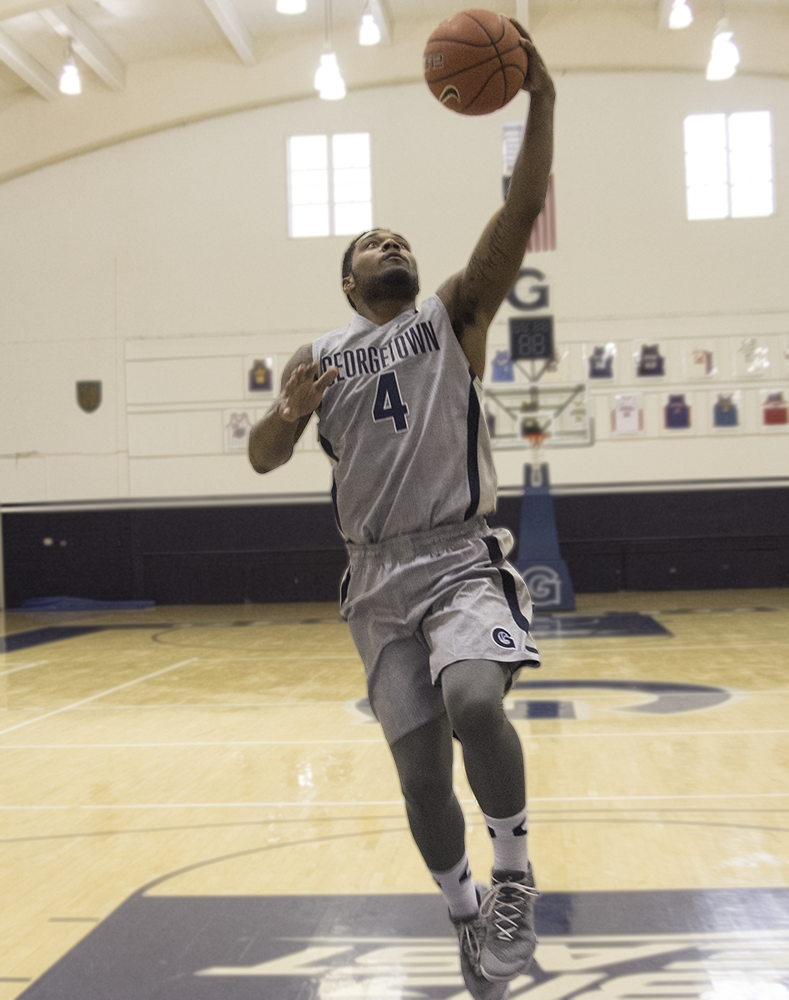 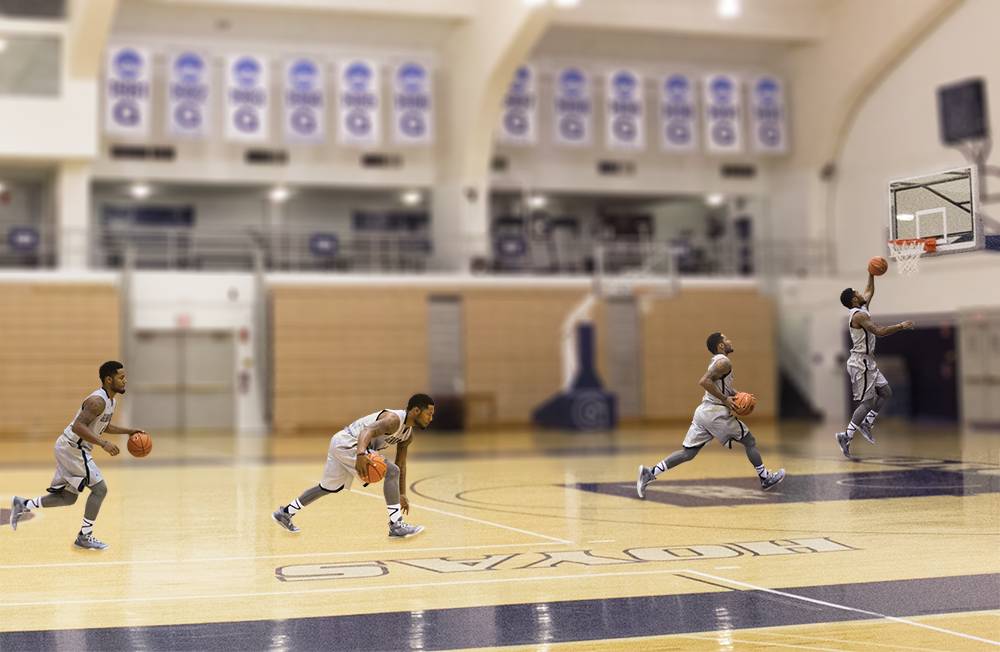 D’vauntes Smith-Rivera has a lot on his shoulders right now. Between being named the Big East Preseason Player of the Year, taking over at least some of the point guard duties from graduated team captain Markel Starks and tutoring the five freshmen on the roster, the 6-foot-3-inch junior could be excused for feeling a bit apprehensive.

But at Georgetown Media Day 2014, Smith-Rivera appeared calm, confident and fully in control.

“Everybody who was at the [Big East] press conference, all the other players put a target on me at that point hearing [about my honor] be announced. So I put a target on everyone else as well. I’m looking forward to exceeding their level of play,” Smith-Rivera said.

In earning the preseason honor, Smith-Rivera joins an elite group of just five other Hoyas to have ever won the award. The junior co-captain found out that he was in the company of Georgetown greats Patrick Ewing (CAS ’85), Allen Iverson and Roy Hibbert (COL ’08) not from the coaching staff or his teammates, but from his mother, Kelana.

“It’s a blessing. To hear my mom call me and tell me that before I found out this past weekend, it was great,” Smith-Rivera said. “Twitter gets the word first. She called me and was excited. She’s more excited for this season than I am, it’s crazy. My mom is a basketball junkie, so I’m happy to make her proud.”

Since then, the junior guard has also been named to the 36-person Bob Cousy Award Preseason Watch List, which is given to the best point guard in the nation at season’s end. While Smith-Rivera has already succeeded in making one of his fans proud, he still has the Georgetown student body to satisfy.

Last season, after senior center Josh Smith’s suspension, the Hoyas struggled in games where DSR and Starks were clearly the only two real threats to score. In the upcoming season, Georgetown must work toward developing a balanced and varied offensive attack.

Even though the Hoyas aim to have a more wide-ranging array of scoring options this year, one thing is for certain — this is DSR’s team. Last season’s starting shooting guard has been given both the opportunity and the responsibility to score and create chances for the Hoyas offense this year.

Of course, none of this would have been possible without a breakout sophomore campaign. While Smith-Rivera did impress during his freshman year, averaging 8.9 points per game, he vastly improved in 2013-2014, delivering 17.6 points per game. In fact, he outperformed Starks in every major category aside from assists (as Starks played the point guard position), including points, rebounds, steals and turnovers per game, as well as field-goal, free-throw and three-point percentages. This is especially impressive considering that DSR accomplished these statistics while deferring to a team captain two years his elder.

Now, with Starks gone, it is DSR’s job not only to score, but to create opportunities for his teammates.

“[My role is] just to make sure guys get comfortable,” Smith-Rivera said. “[I’ve been] able to gel with those guys and figuring out what everyone can do really well and what everybody likes to do. So the chemistry is definitely great.”

The senior leadership has expressed confidence in their team co-captain.

“DSR is a great ball player so playing the 1 (point guard) and 2 (shooting guard) is not really hard for him. He’s smart and he’s got the skills,” senior guard and co-captain Jabril Trawick said.

While DSR has always been a standout performer, he has never been the singular star of a team. At North Central High School, he and former Purdue star Terone Johnson led the Panthers to the Indiana Class 4A State Championship game in 2010.

While he is a native of Indianapolis, DSR’s basketball talents took him to Oak Hill Academy in Virginia for his senior season. On that team, he played alongside four other seniors who would go on to play for major Division I programs, like future UCLA guard Jordan Adams, who often overshadowed DSR. Adams played two years for the Bruins before being drafted in the first round of the 2014 NBA Draft by the Memphis Grizzlies.

Although he now has the burden of being Georgetown’s top threat, Smith-Rivera knows that his supporting cast is key to the success of the team.

“A lot of people are making it seem as if I am the only scoring option on this team, which is definitely not true,” Smith-Rivera said. “We have got a lot of guys who have been stepping forward, and with the returning veterans we have also, they will be big contributors.”

Despite his breakout sophomore year and his preseason accolades, DSR realizes that there are still aspects of his games that require improvement. This offseason, he said that defense and passing were his two greatest emphases.

“Defensively, for the most part, that’s what I have been focused on. Offensively, [I’ve been working on] being more creative for my teammates,” Smith-Rivera said.

If Smith-Rivera can make the transition from effective volume scorer and rebounder to efficient floor general and defensive stalwart, Head Coach John Thompson III will find it even more difficult to keep him off of the court.

DSR’s huge number of minutes played is an indication, in part, of his amazing production, but also of the team’s lack of depth. After playing 35.5 of every 40-minute game, Smith-Rivera will hopefully be able to relinquish some playing time to freshman point guard Tre Campbell.

Thompson has been impressed with Campbell’s early development.

“Tre has been very, very good. I think the transition from high school to college is very difficult regardless of position, and regardless of whether you play a sport or not. … Tre has been probably ahead of where I anticipated, quite honestly,” Thompson said.

Smith-Rivera has been similarly taken with Campbell’s dedication.

“His heart, man, his heart [has impressed me]. You can’t measure somebody who is going to work hard every day. He comes in here, he puts in the hours, puts in the work and we expect him to bring a lot to the table as well,” Smith-Rivera said.

Even if Campbell occasionally allows for Smith-Rivera to take a rest on the bench or more likely, move to his more natural shooting guard position for a bit, DSR will have to transition into a more pass-first offensive outlook in order to initiate Georgetown’s offensive sets and distribute the ball inside. Smith will require a pick-and-roll partner to replace Starks, and senior forward Mikael Hopkins and freshman forward Isaac Copeland will need a guard to feed them touches in the low post.

Surprisingly, Smith-Rivera’s meteoric rise has coincided with a disappointing stretch for the men’s basketball program as a whole.

DSR’s 33-point performance as a freshman against DePaul in February 2013 was quickly followed by a home-and-away sweep of archrivals Syracuse within a two-week span on the way to a second seed in the NCAA tournament. However, the joy over the victories against the hated Orange were soon erased by a shocking first-round loss to 15-seed Florida Gulf Coast. In that game, DSR played 33 minutes but shot 0-for-6 from three-point range, scoring just six points and becoming one of three Hoyas to foul out in the humiliating 78-68 loss in Philadelphia.

Despite the historic loss, DSR clearly had an impact freshman year. While Smith-Rivera did not disappoint last year, the Hoyas never had the clutch finish  of 2012-2013 and their second-round exit in the NIT was a deserved end to a lackluster campaign. DSR sees a different ending to this year.

“Last year at times, defensively, we weren’t at our best,” Smith-Rivera said. “I think that was the lack of versatility, which we have this year, as well as the presence of Josh Smith will help us also. So this year we are definitely more than capable.”

It remains to be seen whether DSR will taste postseason glory in college, but this year appears to be his best chance to do so.

Armed with a bevy of seniors all with something to prove, and up against a weakened conference in which the Hoyas are projected to finish second according to the Big East Preseason Coaches Poll, the conditions seem ideal for Georgetown to make a run in March Madness.

Of course, that all comes back to whether Smith-Rivera can deliver on the court and in an enhanced leadership role.
Thompson emphasized that leadership would come from a group of veterans this year, a vast departure from last year’s dynamic.

“[DSR and the seniors] have done a good job of sharing [the leadership role],” Thompson said. “If you look at the last three years, Markel has been so dominant, his personality on the court and off the court, but now, I’m thinking everyone’s personality is coming out a little bit more, which is good. That should not come off as sounding negative toward Markel. We needed that, that was good, but now everyone else is shining.”

While the team is clearly more egalitarian than in years past, Smith-Rivera will have to be the player that shines brightest for the Hoyas if they hope to make it back to the NCAA tournament this year.

Luckily for fans on the Hilltop, Smith-Rivera appears to be shouldering the weight of expectations, the burden of a new on- and off-court role and the tutelage of the freshmen just fine.

The Big East Preseason Player of the Year hopes that “people are saying the same thing at the end of the season.”

If that is the case, he’ll likely hear about it before his mother calls.