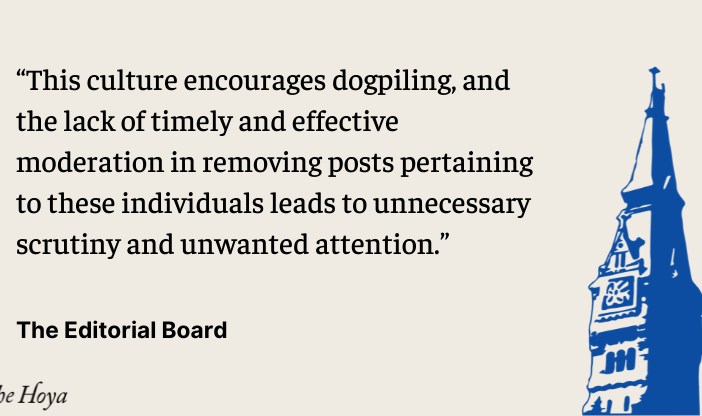 Last spring, a new social media platform called Flok joined the likes of Instagram, GroupMe and BeReal in becoming a pervasive facilitator of campus communication at Georgetown University. Flok is an anonymous platform where students from the same university can publicly post messages to a live feed for other students to read, with the option to upvote or downvote a post. Posts are often intended to be ironic, satirical or comedic.

Flok is notorious for its anonymity, which has turned out to be a double-edged sword. It is a feature which many students appreciate, but has been exploited as a means of espousing hateful or disrespectful messages. These messages range from targeting individuals to cyberbullying to hate speech. The abuse of the app ultimately defeats its main purpose of establishing a “an open, anonymous community” by contributing negatively to campus culture and enabling the spread of discrimination against marginalized groups.

The Editorial Board urges the Georgetown student body to remain conscious of the consequences of abusing anonymous social media platforms like Flok on both individuals and the campus community as a whole. Additionally, the Board calls on Flok to implement a more effective external moderation system in order to prevent the proliferation of bigotry on the app.

Since Flok’s main functionality is based on amassing as many points as possible, it creates a positive feedback loop where users use already popular topics to gain points, thus leading to a self-sustaining cycle of potentially harmful content.

Sanaa Mehta (SFS ’25) expressed concerns about the way that information is disseminated on the app.

“It also promotes regurgitation of the same gossip, drama, events on campus,” she wrote to The Hoya. “It’s a domino effect when one thing gets a lot of upvotes, people reflok or write very very similar opinions to it because it is clearly ‘liked’.”

Mehta said the anonymity feature promotes much of this toxicity.

“However I think it generally is stupid because it allows people to hide behind a screen and say whatever they want,” Mehta wrote. “There is no accountability for what people say.”

Flok’s initial user agreement clearly bans personal information being shared on the app. However, users frequently target specific individuals to be the focus of their posts, whether it be through veiled references, asterisked letters or even stating their full names. This culture encourages dogpiling, and the lack of timely and effective moderation in removing posts pertaining to these individuals leads to unnecessary scrutiny and unwanted attention.

Anna Harpel (COL ’24) said that the app directly contrasts with the ideals of the university, such as respect, care, and diversity of thought.

“Anonymity on Flok enables the morally lowest form of cyberbullying. It shines a light on the dark side of a school that claims that its students embody Jesuit values,” Harpel told The Hoya.

Flok’s moderation process is responsible for much of this individual targeting. Rather than screening posts through an algorithm or outsider, the community moderators are just the top “Flokkers” within a campus community. In other words, the Georgetown students who have amassed the most upvotes are able to control what kind of content is regulated.

Flok did not respond to The Hoya’s request for comment.

Not only does Flok’s moderation style promote negativity on the app, it also allows for bigoted and hateful posts to remain on users’ feeds. In particular, Flok provides a platform for racist language on campus. An April 21 tweet from Finn Thompson (COL ’22) features images of offensive content and discusses the prevalence of racism on the app and the way it reflects upon and harms the Georgetown community.

“If you need any proof that there are racist georgetown students look no further than the campus flok. disgusting. The app has their GU emails and they should give them to the university asap. if flok doesn’t even have a basic filter for racial slurs it shouldn’t exist,” the user wrote in the tweet.

While this occured in April, Flok’s moderation policies have not changed since, meaning such language can still proliferate on the platform. Discrimination in any form should not be tolerated on any platform, much less one as popular as Flok. As such, an external moderation structure that removes the responsibility of regulation from Georgetown students is a critical step toward mitigating the effects of hateful anonymous speech.

Georgetown has the power to take action against students who violate the university harassment policy on social media, which includes “verbal abuse or ridicule, including slurs, epithets, and stereotyping; offensive jokes and comments,” according to a university spokesperson.

“Everyone in our community has a right to express their opinions, even when those opinions are unpopular or controversial,” the spokesperson said. “Students found to be posting content on social media that is in violation of the student code of conduct are subject to disciplinary procedures.”

Yet, the university policy cannot address this problem directly because Georgetown has no jurisdiction over Flok or students posting anonymously. Thus, the onus is on Flok to regulate the environment that its platform creates.

The Editorial Board implores the student body to understand that anonymity is not a mask to hide their hatred and that every post can affect both their peers and the overall campus community. Flok has the potential to be a positive, inclusive space, but when abused, it feeds a hotbed of spite and negativity. Updating its moderation policy promotes a safer platform free from hate that lives up to the standard of respect that everyone at Georgetown deserves.

The Hoya’s editorial board is composed of six students and is chaired by the opinion editors. Editorials reflect only the beliefs of a majority of the board and are not representative of The Hoya or any individual member of the board.