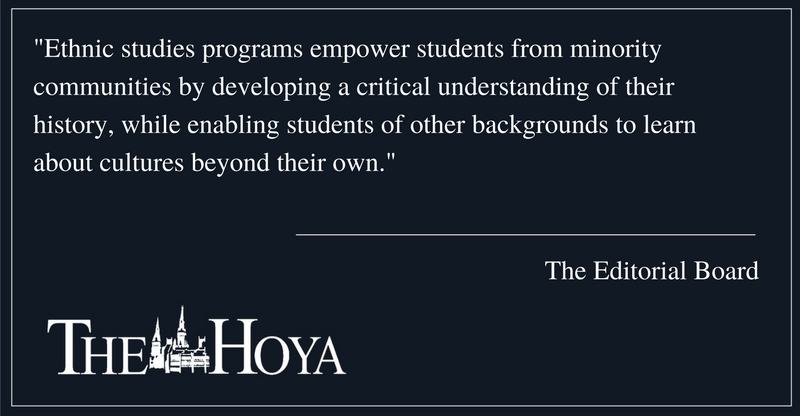 Georgetown University’s curriculum does not reflect the academic demands of its underrepresented communities. Ethnic studies programs empower students to learn more about their own cultures and the cultures of other people.

The university has recognized the value of these programs in the past, evidenced by the introduction of an African-American studies department in 2016 to uphold racial justice in its curriculum, cited as one of the motivating factors for the department’s creation.

In pursuit of a more inclusive academic curriculum, Georgetown should form a working group to explore the creation of new interdisciplinary ethnic studies programs, including programs for Asian-American, Latinx and Native American studies.

Georgetown’s academic offerings do not yet reflect its increasingly diverse student body. In 1980, 87 percent of Georgetown’s students were white; by 2015, that share had dropped to 64 percent.

Unlike Stanford University, Yale University and Northwestern University, Georgetown does not offer an interdisciplinary Latinx studies minor, as noted by this editorial board. In a viewpoint, Zachary Frial (SFS ’18) and Jennifer Sugijianto (COL ’20) lamented the absence of a single class on Asian-American studies.

The Asian-Pacific Islander Leadership Forum, launched in March 2017, has called for the creation of both Latinx studies and Asian-American studies programs. This editorial board urges the university to seriously consider implementing these proposals as soon as the spring 2019 semester, to be developed in coordination with the proposed working group.

Ethnic studies programs empower students from minority communities by developing a critical understanding of their history, while enabling students of other backgrounds to learn about cultures beyond their own. The Center for Jewish Civilization, founded in 2003 as the Program for Jewish Civilization, stands as an exemplary model of an ethnic studies program.

The CJC offers a certificate, hosts leading thinkers in the Jewish world and includes courses spanning topics from the Holocaust to the Jewish-American experience. Jewish students have a space to learn about their heritage while connecting with other Jewish students. Simultaneously, non-Jewish students can learn about Jewish civilization: 40 percent of students receiving a CJC certificate are not Jewish, according to the CJC.

A Latinx studies program would similarly benefit not only Latinx students, but also the rest of the Georgetown community, which would be well-served by an education in the history and culture of their peers. Programs like these are especially important in a time of rising racism in the United States, spurred on by leaders like President Donald Trump.

Similar reasoning applies to the other minority populations represented at Georgetown. Universities should encourage intercultural understanding; ethnic studies programs play a major role in advancing that goal by contextualizing the place of every community in American history and culture.

Questions of funding and resources are important and must be explored by a working group. This editorial board is not calling for the overnight establishment of three ethnic studies departments. Rather, the introduction of a handful of classes in each potential ethnic studies program — APILF members have already proposed a syllabus for an introductory course to Asian-American history — could serve as test cases. With enough demand, the university could potentially create programs and eventually full departments.

In pursuit of a more inclusive and fully engaging education, Georgetown should include the student voices of those who have been advocating for increased recognition in the university’s curriculum.

Georgetown students deserve an education in the history and culture of their communities — and those of their peers. The university must create a working group in pursuit of this mission.