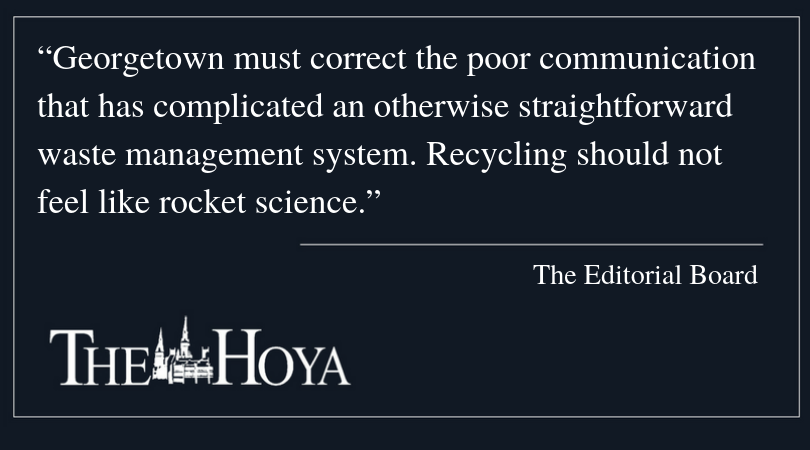 Recycling at Georgetown University is needlessly confusing. The university’s failure to explain recycling procedures has muddled student understanding of what should be a simple process, leaving a vacuum for detrimental rumors to fester.

Georgetown vastly improved its waste management system with its hiring of a recycling manager in 1989. By 2011, the university ranked among the best universities in overall recycling rate, according to national environmental competition RecycleMania. Eight years later, however, students doubt that Georgetown even recycles. An uncommunicative Office of Sustainability has only bolstered these rumors, failing to adequately correct misinformation.

If the Office of Sustainability wants to make sure students are actually recycling, it must dispel rumors and restore faith in the university’s recycling system. The university could do so by actively communicating with students through emails, hiring a new recycling manager and updating its website and bins.

Georgetown’s recycling system began to deteriorate in 2012, when the recycling manager left the position at the same time the university transitioned to a new single-stream system. The single-stream process mixes recyclables — plastics, metals and paper — in the same collection truck. Without a manager during this transition, critical waste management tasks, such as proper signage and training of custodians, were ignored and the university fell short in recycling these commingled materials.

Georgetown’s past failure to recycle commingled materials is just one example of a concerning trend in university actions: neglect of recycling.

While Georgetown properly recycles these materials now, the university has not formally informed students of the new single-stream system. After students witnessed custodians mixing the recyclables last year, rumors cropped up that the university was not recycling, according to Nareg Kuyumjian (SFS ’21), president of Georgetown Renewable Energy and Environmental Network.

“Though the source of these false rumors is impossible to singularize, what is important is that students use this reasoning as an excuse for their complacent recycling practices,” said Kuyumjian. Apathy and confusion have the dangerous potential to exacerbate improper waste disposal, contaminating a load of recyclables beyond acceptable levels for local recycling facilities.

If it seeks to ensure that students properly recycle, Georgetown must correct rumors and rebuild trust in the process by actively improving communication.

The Office of Sustainability’s website is frustratingly outdated. Most recycling data on the website are from 2010 and do not reflect the new single-stream system, failing to inform any students independently seeking the correct information. This lack of current information lends credibility to student doubts that the university does not recycle, encouraging student abandonment of recycling.

By updating its website and data, the Office of Sustainability could make the recycling process clear and avoid confusion or apathy.

Moreover, Georgetown must immediately hire a new recycling manager. The position, which has been vacant since 2012, is integral to seamlessly coordinating the recycling program and ensuring that the community is properly informed on the process.

Though increasing transparency by hiring a new manager and streamlining communication will increase expenses for the university, the Office of Sustainability is currently overworked. With only two full-time employees and four student interns dedicated to recycling, the office needs assistance to improve its recycling system and communication.

Students in GREEN called on the university to hire a recycling manager last November in a viewpoint in The Hoya, but Georgetown has not addressed these demands or indicated it plans to do so.

Additionally, Georgetown should clear up student confusion by replacing its old bins. Bins are currently separated to sort between cans, paper and plastic, even though these materials will eventually be mixed.

Replacing the bins would confirm the university’s switch to a single-stream process and signal a fresh start to students disillusioned with the recycling system.

In an attempt to educate students, a pilot program by the Office of Sustainability and GREEN has relabeled bins in the Southwest Quad and Village A, according to university spokesperson Matt Hill. Recyclables besides corrugated cardboard are now called “mixed recycling” and all other materials “waste.”

An important first step, the university should extend this program as a short-term solution until it purchases new bins to demonstrate its commitment to recycling across campus.

In recent years, Georgetown University — once a leader in recycling — has failed to convince its students that it recycles at all.

Georgetown must correct the poor communication that has complicated an otherwise straightforward waste management system. Recycling should not feel like rocket science.

Correction: This article was updated Feb. 24 to reflect logistical information of GREEN and the Office of Sustainability.