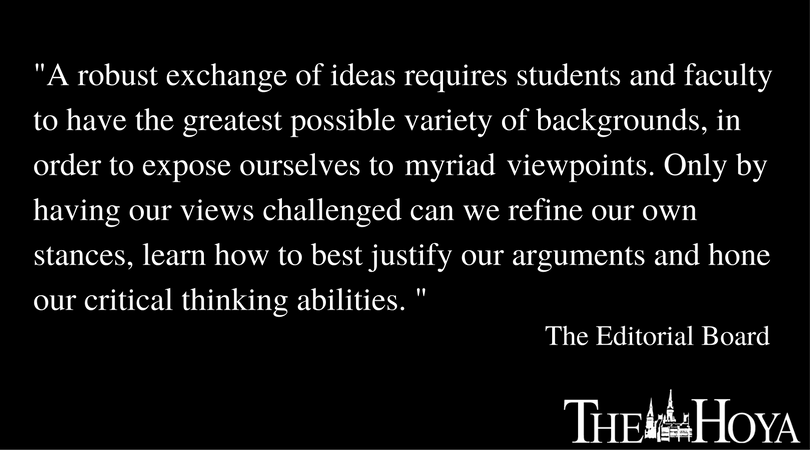 One of the hallmarks of higher education is the opportunity to understand and grapple with a wide range of ideas. Yet, Georgetown falls short on its commitment to this ideological diversity in the makeup of its instructional corps. The university must work to remedy its lack of politically conservative professors by considering a diversity of viewpoints when hiring instructors, from assistant professors to those with tenure, and by ensuring that no bias exists against conservative educators in the hiring process.

It is difficult to pinpoint the exact proportion of conservative professors at Georgetown, due to the lack of available data, but their absence has nevertheless been noted before: In March 2016, John Hasnas — a professor at the McDonough School of Business and the Georgetown University Law Center — penned an op-ed in The Wall Street Journal discussing not only the near-absence of conservative professors at universities but the dearth at Georgetown specifically.

According to Hasnas, in his experience, faculty search committees were never instructed to increase political or ideological diversity, but were in fact often told the opposite.

In his op-ed, Hasnas describes episodes in which a job description was altered to mitigate the number of conservative applicants and in which candidates were removed from consideration due to their affiliations with libertarian or conservative institutions.

If the university truly wishes to cultivate a diverse faculty, it must re-examine this aspect of its hiring process to ensure that a conscious bias against conservative professors does not exist.

By failing to enshrine ideological diversity, Georgetown falters in some of the most fundamental promises of higher education. A robust exchange of ideas requires students and faculty to have the greatest possible variety of backgrounds, to expose ourselves to myriad viewpoints. Only by having our views challenged can we refine our own stances, learn how to best justify our arguments and hone our critical thinking abilities.

Moreover, the absence of true ideological diversity on our campus is problematic for all students. Allowing one specific political ideology a monopoly on our campus can foster dangerous levels of intolerance for contradictory beliefs. The results of permitting such ideological homogeneity have been witnessed at college campuses nationwide, including at Middlebury College, where violent protests erupted in response to a speech by author Charles Murray, and at the University of California, Berkeley, which has become a battleground for free expression.

The imbalance of ideological diversity in our faculty disadvantages students of all political persuasions: Liberal students fall into the trap of groupthink, while conservative students feel alienated by the absence of faculty supportive of their political ideals. Both sides lack an adequate model of reasonable, academic, respectful debate that professors often provide for their students, leading us to become more entrenched in our own ideas instead of learning how to disagree reasonably.

To truly foster the freedom of expression to which it claims to be committed, Georgetown must ensure there is no bias in its process of hiring professors to ensure that ideological diversity is considered. If not, we risk perpetuating an echo chamber of ideas, denying students the opportunity to challenge their own beliefs and learn how to respectfully disagree with the beliefs of others.