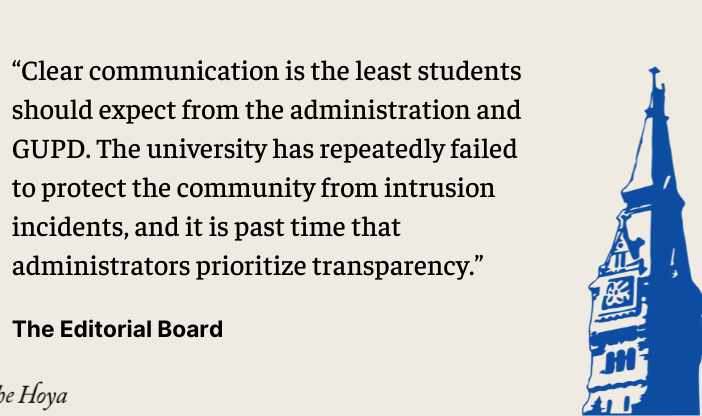 As the fall 2021 semester comes to a close, the approaching spring semester gives Georgetown University community members an opportunity to reflect on the return to campus. Though being back on campus is exciting, students have voiced frustration over the university’s failure to uphold basic safety measures. Throughout the fall semester, the Georgetown University Police Department (GUPD) has recorded at least six unlawful entries on campus.

Following a semester of safety concerns, the university must guarantee students’ safety while they live and learn at Georgetown. To do so, administrators must communicate with students in a transparent and timely fashion. However, the university’s solution cannot be increasing GUPD’s presence on campus.

Student discourse regarding intruders on campus took off after an unknown person unlawfully entered New South Hall and walked into a women’s bathroom, where they whispered to a student and ignored her requests to leave. Despite the deeply unsettling nature of the incident, the university did not contact students living in New South until nearly 20 hours after the incident.

As additional intrusion reports have piled up this semester, students have voiced concern over poor transparency from Georgetown’s administration and called on the university to provide more details about the nature of the intrusions.

In particular, student advocates demanded the university improve its faulty HOYAlert system. Georgetown did not send out any campuswide alerts on HOYAlerts, an emergency message notification system, regarding safety concerns.

Receiving emergency communications is essential for student safety, according to Caleb Richmond (SFS ’25), who was visiting friends during the New South intrusion. Richmond wrote an open letter to the university voicing concerns about how it handled the situation.

“While transparency is a more long-term goal, I wish the university had told us anything during the events last night (i.e. shelter in place or something of the sort) as opposed to letting confusion spread through their silence,” Richmond wrote in an email to The Hoya, published in a Sept. 24 article on residence hall intrusions the day after the intrusion.

The university’s response to intrusions has been lackluster at best and neglectful at worst. During emergencies when minutes matter, the university and GUPD must prioritize clear communication with students. Without direction from university officials, administrators force students to rely on rumors to gain information about the state of their safety.

In response to these incidents, GUPD has hung posters around campus encouraging students to be aware of their surroundings and has announced it would increase its patrol presence around residence halls. However, studies show that increasing police presence does not deter crime, according to researchers at the National Bureau of Economic Research.

Students who encountered an intruder in Reynolds Hall in September did not contact GUPD even though they felt uncomfortable, making it clear that increasing police presence will not improve student safety because students understandably do not trust campus police to protect them, nor should they.

GUPD has a history of hyperpolicing students of color, as well as internal allegations of racial bias by its own former officers. Numerous students of color have shared stories within private clubs and organizations detailing racial bias incidents, including being forced to prove their relationship to the university, experiencing excessive use of force from officers and being unnecessarily surveilled by the department. GUPD’s troubling record gives community members, especially those from marginalized backgrounds, no reason to trust the department with their safety.

GUPD does all it can to ensure it operates equitably, according to a university spokesperson.

“Based on the results of the Campus Cultural Climate Survey, GUPD instituted a new initiative to track all proactive stops performed by its police officers. Demographic information that has been collected will be analyzed and shared with university leadership and published for the university community twice each year on the GUPD website,” a university spokesperson wrote in an email to The Hoya.

Guaranteeing student safety must mean ensuring that all students feel safe regardless of their identity. The university’s lack of timely communication following intrusion incidents caused uncertainty and confusion among students, and its next steps must be thoroughly thought out and researched.

Rather than forcing students to take their safety into their own hands, GUPD must address its failures in protecting all members of the campus community. The department needs to improve transparency, not only in times of emergency, but also in its operations in the Georgetown community.

Rethinking community safety is a significant task to take on, but it is absolutely imperative. To keep students safe, the university can start by hiring professionals to Health Education Services trained in deescalation. Administrators could also push to expand the existing blue light system to make these professionals easy to contact. In order to more substantively invest in long-term solutions, the university should hire a panel of experts who have done research about policing to make recommendations for how to keep students safe and decrease the presence of GUPD.

Clear communication is the least students should expect from the administration and GUPD. The university has repeatedly failed to protect the community from intrusion incidents, and it is past time that administrators prioritize transparency.

The Hoya’s Editorial Board is composed of six students and is chaired by the Opinion editors. Editorials reflect only the beliefs of a majority of the board and are not representative of The Hoya or any individual member of the board.