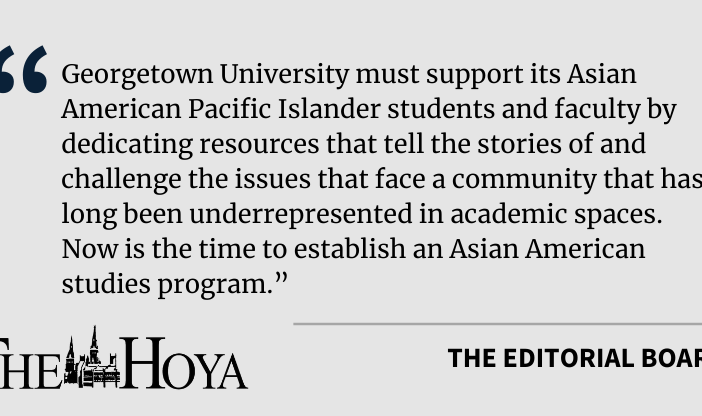 The shooting of eight people in Atlanta last week, six of whom were women of Asian descent, was tragic but unfortunately not surprising to the Asian community. In light of the incident, which comes after centuries of anti-Asian racism in the United States, Georgetown University must take concrete steps to support Asian and Asian American students on campus.

The Editorial Board was horrified by last week’s shootings in Atlanta that targeted women of Asian descent. But the shooting was not an isolated crime: This incident comes after 3,800 recorded incidents of harassment, violence and discrimination against Asians that have occurred since the start of the COVID-19 pandemic. While the COVID-19-related rise in hate crimes is abhorrent, the racist beliefs underlying these acts are hardly new. The United States has a long, deplorable history of perpetuating racism and mass violence against Asians. Georgetown has a responsibility to educate students on the historic marginalization of the Asian American and Pacific Islander community. In order to do so, Georgetown must affirm student activism by establishing an Asian American studies program.

In 2019, the Georgetown Asian and Pacific Islander Leadership Forum launched its “Georgetown Doesn’t Teach Me” campaign, highlighting the need for greater curricular options covering AAPI subject matter and calling for the university to fulfill its commitment to diverse curricula. In a 2010 letter, University President John J. DeGioia (CAS ’79, GRD ’95) affirmed university support for adding additional faculty members specializing in Asian American studies, offering new courses in the field and planning for the creation of a structured Asian American studies program. Georgetown has yet to fulfill its commitment.

The program would allow AAPI students to engage with their historically marginalized identity, according to Chantal Li (SFS ’24), president of the Georgetown chapter of Dear Asian Youth, a teen-led AAPI-centered advocacy social media platform.

AAPI students have consistently faced poor representation at Georgetown. For example, the Asian-American Hub for Organizing, Movement, and Empowerment, or HOME, which dedicated a space on campus to Asian American students, was only approved in 2019 as a temporary addition to Magis Row.

Further, there are few academic opportunities for AAPI students to engage with their identity in the classroom. Despite AAPI students comprising 10.4% of Georgetown’s undergraduate population, students and faculty members have noted the university’s supply of Asian American studies programming is lacking compared to student interest in the field.

“Education and awareness are very powerful tools in the fight against hate,” Russell told The Hoya in an email. “As of right now, there are few course options offered by a number of professors every semester through departments such as English.”

Aside from these academic barriers to representation, some AAPI students often feel their identity is underacknowledged in other social and classroom settings, according to Jenny Xu (COL ’21), a student involved in the “Georgetown Doesn’t Teach Me” campaign. (Full disclosure: Xu previously served on the Editorial Board of The Hoya.) Professors and student leaders often fail to recognize the importance of including the AAPI identity in conversations about race, which a structured program would help remedy, Xu wrote in an email to The Hoya.

“From professors neglecting to even acknowledge AAPI identities when discussing race in academic contexts to rhetorical exclusion by student leaders who have not shown interest in learning about AAPI identities and histories, there is a clear trend in my four years at Georgetown of the AAPI identity being treated as an afterthought,” Xu wrote. “AAPI students deserve to have a Center to honor, engage with, and sustain the study of their identities that shape our everyday lives.”

Rosemary Kilkenny, Georgetown’s vice president for diversity, equity and inclusion, issued a statement expressing solidarity with the AAPI community in light of the shooting in Atlanta. She expressed the university’s commitment to diversity, equity, inclusion and racial justice for all people. Further, Georgetown currently hopes to support the AAPI community through the engaging diversity core curriculum requirement, which allows students to explore different cultures, beliefs and ideas, according to a university spokesperson.

“The University is extremely supportive of exploring course options that share our diversity, equity and inclusion values, and reflect the broad interests of our students,” the spokesperson wrote in an email to The Hoya. “All Georgetown students are required to take two Engaging Diversity courses as part of the Core Curriculum Requirements.”

The core requirement, while important, does nothing to ensure AAPI identities are represented among the courses that “engage diversity.” Expanding Asian American studies courses and creating an Asian American studies program at Georgetown would provide AAPI students an opportunity to find solidarity and engage with their history and also give them the tools to work toward justice for the community. For non-Asian students, a program at Georgetown would educate them on the long history of Asian Americans, which is often neglected in primary and secondary education.

Georgetown must support its AAPI students and faculty by dedicating resources that tell the stories of and challenge the issues that face a community that has long been underrepresented in academic spaces. Now is the time to establish an Asian American studies program.

The Hoya’s Editorial Board is composed of six students and is chaired by the Opinion editor. Editorials reflect only the beliefs of a majority of the board and are not representative of The Hoya or any individual member of the board.