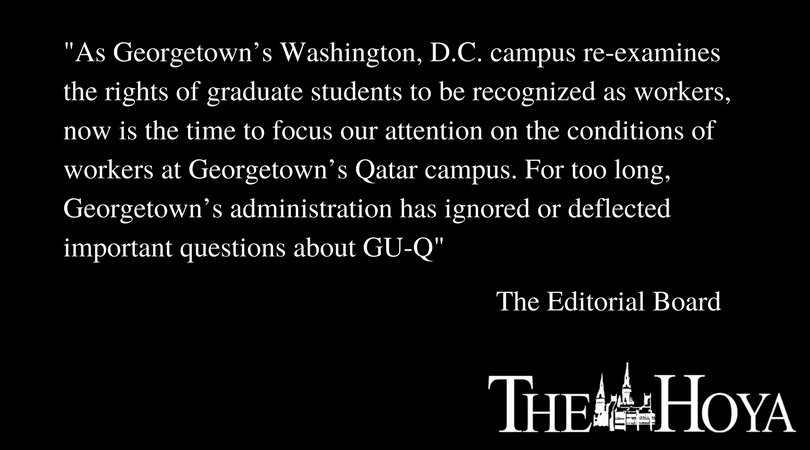 Georgetown University is in a position of great power regarding the rights of abused migrant workers in Qatar. So far, it has shirked its responsibility by allowing Qatari standards to dictate treatment of its own employees.

As Georgetown’s Washington, D.C. campus re-examines the rights of graduate students to be recognized as workers, now is the time to focus our attention on the conditions of workers at Georgetown’s Qatar campus. For too long, Georgetown’s administration has ignored or deflected important questions about GU-Q. Georgetown must investigate and address the working conditions of employees on its campus in Qatar.

In Qatar, abuse and exploitation of workers is the norm rather than the exception. According to Human Rights Watch, “many migrant workers complain that employers failed to pay their wages on time, and sometimes not at all. Many workers face physical and sexual abuse.”

Georgetown, along with seven other universities with campuses in Qatar’s Education City, relies heavily on migrant labor, according to The Guardian. However, these workers do not fall under Georgetown’s Just Employment Policy, which draws from “Catholic social teaching on the dignity of work and the rights of workers.”

Instead, GU-Q workers are dependent on the standards set by the Qatar Foundation, an organization for Qatari development founded and governed by the Qatari royal family.

If Georgetown truly believes it has a responsibility to treat its employees in accordance with Jesuit values, the JEP ought not be limited to American borders. An investigation into working conditions is long overdue.

The United Arab Emirates, which shares Qatar’s proclivity for autocracy and its disregard for workplace safety, is home to a New York University campus, which was investigated by The Guardian in 2013. The reporting revealed the inescapable misery many of the workers faced. Campus construction workers lived in cramped conditions, were assaulted by their bosses and were denied medical care by their employers — who, in accordance with UAE and Qatari law, are solely responsible for such services.

NYU’s Abu Dhabi campus and Georgetown’s Qatar campus both operate amid extensive government control, poor legal protection for workers and government-owned media. The main difference between the two is exposure. The dangerous conditions of one have been uncovered, while the questions of the other remain unanswered.

This editorial board is hardly the first body to challenge Georgetown for the treatment of its Qatari workers.

In August 2017, the United Nations Business and Human Rights Resource Centre asked 19 schools with Qatar or UAE campuses about their treatment of migrant workers’ human and labor rights.

Georgetown refused to participate. Instead, the administration issued a statement claiming it would “continuously review our policies and practices to ensure labor standards and practices that align with our values as a Catholic and Jesuit institution.”

This statement did not address the true problem. Georgetown may have adequate policies regarding workplace protection, but it has failed to ensure that they are applied to GU-Q. The administration has failed to provide transparency, which is inexcusable given past reporting on campuses similar to GU-Q.

For example, in 2017,  DeGioia and Sheikha Hind mint Hamad Al Thani, CEO of Qatar Foundation, established a Joint Task Force on Worker Welfare, designed to research best practices for laborers overseen by both the Foundation and the university.

The task force was not previously publicly acknowledged and was disclosed to The Hoya in a Feb. 9 email.

Over the past year, Task Force recommendations like combating unethical recruitment practices, improved training for workers regarding their rights and enhancing monitoring and auditing of contractors have been implemented.

Georgetown’s administration has regularly deflected criticisms of its Qatar campus by emphasizing the importance of dialogue with the Gulf state.

The administration has regularly deflected criticisms of its Qatar campus by emphasizing the importance of dialogue with the Gulf state. In 2015, University President John J. DeGioia said, “Being engaged is better than not. We are contributing, I think, to building a common good in the region.” Those are worthy and important objectives; this editorial board supports the preservation of GU-Q.

However, Georgetown has not yet made a good-faith effort to truly engage with the region. University administrators must allow an independent investigation of working conditions on its GU-Q campus, as well as investigations into contractors used by GU-Q. In the meantime, Georgetown must extend the JEP to the Qatar campus.

Georgetown’s unwillingness to investigate its Qatar campus implies that only some people and geographies are morally bound by Jesuit values. By turning a blind eye to inappropriate working conditions, Georgetown is ignoring its commitment to social justice.

This editorial was updated Feb. 13 to include the previously-undisclosed Qatar Foundation-Georgetown University Joint Task Force on Worker Welfare.