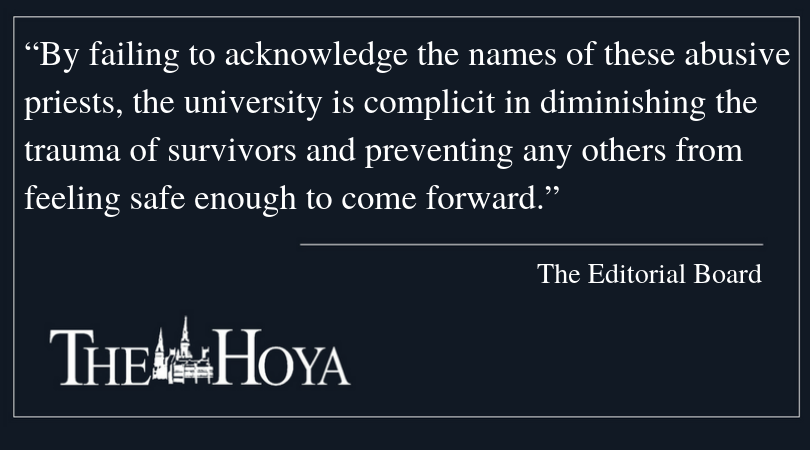 This editorial discusses sexual abuse. Please refer to the end of the article for on- and off-campus resources.

University President John J. DeGioia named four abusive priests in Georgetown’s history in a universitywide email Dec. 17. Since then, The Hoya has identified 10 more, including two associate deans from the last 25 years and Fr. Daniel O’Connell, S.J., who remained a professor emeritus until Wednesday afternoon.

The abuse allegations against all 14 priests are a matter of public record, and most of their work at Georgetown can be found in the university’s own archives. Still, Georgetown has been willfully ignorant in recognizing the extent of its connection to clerical abuse.

Georgetown can no longer hide from its disturbing past in the clergy sex abuse crisis. The university must publicly acknowledge and condemn the other 10 abusive priests to allow the campus to move forward and take accountability for its negligence.

Four priests appeared in highly publicized reports from Jesuit provinces other than the Maryland province, one has received media attention, including for a suit filed against him last month, and two cases were brought directly to the office of the president — O’Connell in 2009, and Sr. Lisa Zuccarelli in November 2018.

Though DeGioia informed students of four priests listed on a December 2018 report released by the Maryland Province of the Society of Jesus, he failed to mention two other Georgetown-connected Jesuits on the same report: H. Cornell Bradley, a campus minister for a year, and Fr. Neil McLaughlin, S.J., who worked in Georgetown University Hospital for 18 years.

Georgetown could have easily accessed all of this publicly available information. Yet senior officials irresponsibly turned a blind eye to the university’s own history. This inexcusable negligence demonstrates a lack of interest in confronting Georgetown’s past with clerical abuse.

Though the university was aware of allegations against O’Connell in 2009, he was still honored as a professor emeritus until March 13, eight days after The Hoya reached out for comment for this investigation.

As a professor emeritus — and a known abuser — O’Connell published research under Georgetown’s name as recently as 2016. He also lectured at the university in a 2008 symposium, five years after allegations against him were first deemed credible in a settlement with the Missouri Province.

Though Georgetown was not aware of the allegations when he lectured, the university has betrayed student trust by failing to remove O’Connell’s emeritus status before being reminded of the title by The Hoya.

Only by actively addressing public allegations against Georgetown-connected priests can the university rebuild a modicum of student trust in this institution.

Georgetown must also recognize that its failure to name and condemn abusive priests is inherently damaging and withholds justice from survivors.

Though DeGioia touted a commitment to “creating a culture of safeguarding vulnerable people” in his December email, survivors of O’Connell’s abuse watched their abuser benefit from his honored status at Georgetown.

Moreover, survivors of abuse by Georgetown-connected priests — both those who have come forward and those have remained silent — have witnessed this institution ignore the brave voices making the allegations.

By failing to acknowledge the names of these abusive priests, the university is complicit in diminishing the trauma of survivors and preventing any others from feeling safe enough to come forward.

Thus far, the university has failed to lead by example on sexual abuse within the church. Georgetown rescinded the honorary degree of documented abuser and former cardinal Theodore McCarrick only after he was laicized Feb. 19, 2019, months after the Catholic University of America and Fordham University revoked the degrees of McCarrick and accused accomplice in abuse Cardinal Donald Wuerl.

Instead, Georgetown has responded to the clergy sexual abuse crisis with lukewarm, broad community reflections on the Catholic Church rather than a critical self-examination of the university’s connection to it.

The university should now amend its previous inaction and be a leader in reconciling with its connection to clerical abuse by addressing the once-trusted priests accused of such atrocious acts.

The university’s failure to acknowledge these priests suggests an acceptance of such horrific behavior and an unwillingness to take responsibility for its past. Georgetown would prove no better than the Catholic Church — and its initial cover-ups of abuse before the 2002 Boston Globe Spotlight investigation — if it does not reconcile with this history.

The 14 Georgetown-affiliated priests credibly accused of assault are ingrained in university history. These priests were community members and served as professors, associate deans, campus ministers, employees and students. Until their recognition, this campus will be unable to move forward.

Ideally, in light of The Hoya’s investigation, Georgetown would actively contribute to reconciliation and student healing. Given the university’s track record in responding to sexual abuse in the church — Wuerl’s honorary degree has still not been revoked and O’Connell was an honoree of the university until Wednesday afternoon — Georgetown’s ability and willingness to be an active leader is doubtful.

At bare minimum, the university must publicly recognize and condemn the 10 abusive priests. Until it does so, the university will remain complicit in benefitting abusers and silencing survivors.