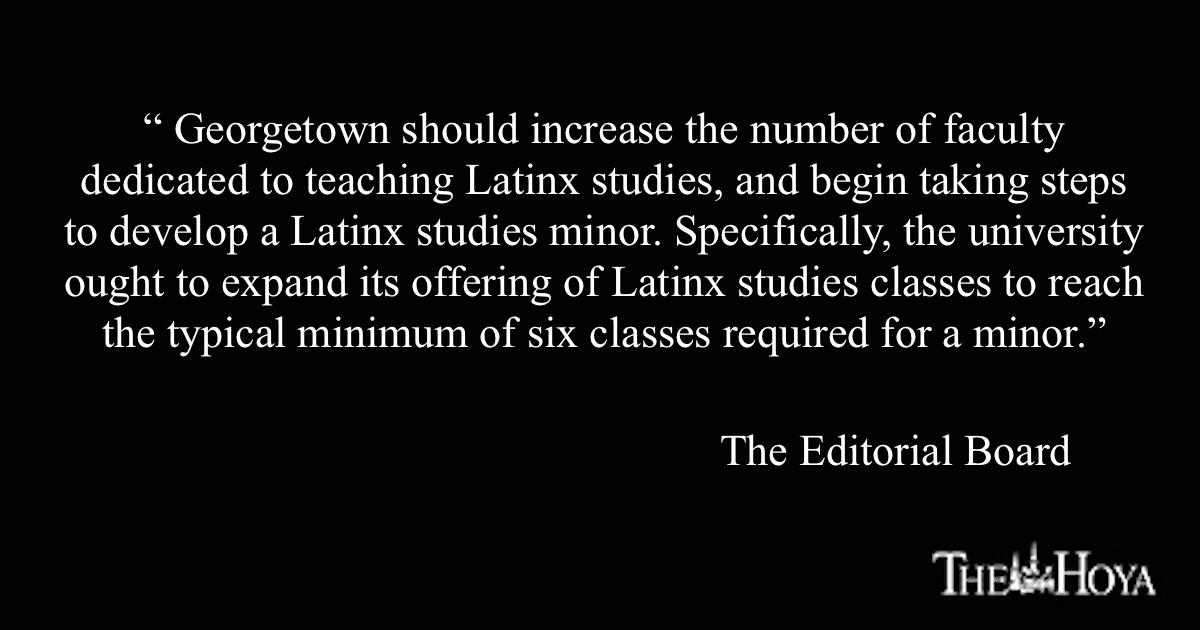 Today marks the beginning of the 2017 Latinx Heritage Month. First sponsored by the university in 2014, this monthlong period of celebration and discussion of Latinx culture is just one of many efforts Georgetown has made in recent years to support its Latinx community.

For example, after advocacy by the Latinx Leadership Forum, La Casa Latina — a space where Latinx students can access resources and engage in important discussions about their identities and experiences — opened in 2016.

However, there remains an integral step that the university has thus far failed to take in support of the Latinx community: the development of opportunities to study Latinidad at Georgetown.

As it stands, Georgetown offers a mere three classes on the American Latinx experience: “Mexico, Mexicans, and the U.S.,” “U.S. [email protected] Literature and Culture” and “Latino Church Doing Justice.” Moreover, the university employs only one tenured professor dedicated to teaching Latinx studies: Ricardo Ortiz, who serves not only as an associate professor of U.S. Latino literature and culture but also as chair of the department of English, meaning there is currently no professor solely devoted to Latinx studies.

To remedy this issue, Georgetown should increase the number of faculty dedicated to teaching Latinx studies and begin taking steps to develop a Latinx studies minor. Specifically, the university ought to expand its offering of Latinx studies classes to reach the typical minimum of six classes required for a minor. Such classes could focus not only on the experiences of Latinx individuals in the United States but also on the unique history and culture of this community.

Over the last several years, the administration has strived to ensure a broad and inclusive curriculum — exemplified by the implementation of a diversity course requirement in 2015, the creation of the African American studies department and major last February and the establishment of a disabilities studies minor in April. In this regard, a Latinx studies minor would reaffirm the university’s commitment to its newly created diversity course requirement and to upholding racial justice in its curriculum, cited as one of the motivating factors for the new emphasis on African American studies. The creation of the new major was supported by 99.5 percent of students, according to a student-led survey.

Efforts to establish a minor should not be difficult given the interdisciplinary nature of Latinx studies, as new courses could be offered in a myriad of areas including history, art, culture and literature. An interdisciplinary Latinx studies minor would put us on par in this respect with many of our peer institutions. Stanford University, Yale University and Northwestern University have all established such programs, with Northwestern offering 12 courses in its Latina and Latino studies program and Stanford offering nine courses in its Chicanx/Latinx studies program.

Though some may argue that a Latinx studies minor would not attract sufficient interest to remain sustainable, the creation of similar programs at peer institutions indicates that a similar demand for this opportunity could exist among Georgetown students. Moreover, the incremental development of this area of study — starting with the addition of three new classes in Latinx studies in order to create a minor — would allow the university to gauge interest in the program as they improve the curricular offerings.

As the demographics of our nation continue to shift, our curriculum ought to evolve to reflect them. Hispanic and Latino individuals have come to make up 17 percent of the U.S. population and nearly 10 percent of the Georgetown student body. Not only do Latinx students deserve the opportunity to learn about their heritage in a classroom setting, but it is also integral for our entire community to be able to study Latinx culture, history, art and more.

Like other humanities and social science fields, a Latinx studies minor would offer students both breadth, in its interdisciplinary nature, and depth. Students would be able to develop critical thinking skills, the crux of a liberal arts education, while studying a heritage often neglected in curricular offerings.

Georgetown ought to establish a Latinx studies minor in order to develop the currently nearly non-existent opportunities to study the American Latinx experience. To do so, the university must create new classes in a variety of fields that focus on this topic and must work to expand its corps of professors specifically dedicated to teaching Latinx studies. In this way, Georgetown will ensure that its actions truly match its rhetoric of diversity, and that it continues to support the Latinx community.