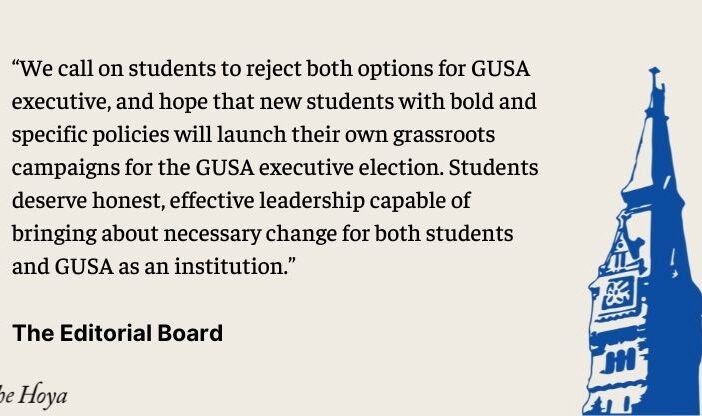 For Georgetown students, Georgetown University Student Association (GUSA) executive elections ostensibly offer an opportunity for new, perhaps more promising leadership that best serves their interests. Yet this campaign season has produced two underwhelming tickets that epitomize the failures of GUSA as an institution.

While Thomas Leonard (COL ’23) and Nirvana Khan (SFS ’24) seem to have a reasonable grasp of important issues, their specific plans for implementing policies to address these issues fall short. Conversely, Kole Wolfe (SFS ’24) and Zeke Ume-Ukeje’s (COL ’24) campaign has rightly been received as underwhelming, and the two have insufficient knowledge of issues facing the Georgetown community.

[Disclaimer: Kole Wolfe served as a Staff Writer for The Hoya in spring 2021.]

In light of these disappointing options, the Editorial Board refuses to endorse a ticket in the 2022 GUSA executive election and urges students to vote for community members they believe will make positive change on campus using the write-in option.

Wolfe and Ume-Ukejes’ platform is the more concerning of the two tickets, showing a lack of understanding of campus issues, as well as a lack of seriousness.

When The Hoya asked about their plan to prioritize campus safety following a string of dorm intrusions last semester, Wolfe responded that students should form a task force to look for danger.

“If there was just some sort of team who would scan the hallways for one minute every night on their different respective floors, just trying to keep in mind that, ‘okay, we’re probably going to be safe, but you know, safety is priority number one.’ And then, okay, I look down the hallway, I see some dude with a knife. That means it’s time to call some serious backup,” Wolfe told The Hoya.

Wolfe also exhibited a lack of understanding about GUSA’s operations and even told The Hoya that the organization restructured itself in November. This statement is not true: the GUSA restructuring referendum did not pass a student vote because of a lack of voter turnout.

When asked about more specific issues such as GU272, restructuring GUSA and public safety, they continued to defer specific stances until their platform release, which came several days later and only included vague statements on increasing transparency and improving club culture.

Certainly, the Leonard-Khan ticket is the more promising of the two options, though still disappointing. Leonard and Khan both have extensive GUSA experience, with Leonard serving as the current GUSA vice president and Khan as a senator.

Though the duo recognizes many of the major issues facing students — including but not limited to meal plan exemptions, housing and policies to assist low-income and students of color — the Leonard-Khan platform still lags behind those of past administrations, offering less specific or innovative plans that make broad promises with no clear path for achievement.

In their interview with The Hoya, Leonard and Khan both emphasized the need for more accessibility. However, the proposed policies, such as institutionalizing “a reporting system for unmet student academic accommodation needs” merely state the obvious with no actual guidelines for implementation.

Their lack of transparency regarding their campaign advisory team is cause for additional concern, as the student body deserves to know who is both advising their campaign and wielding influence over policymaking. Previous campaigns, like the 2020 Ferretti-Badger campaign and the 2021 Blass-Sanchez campaign, have highlighted their team of advisors and defined their roles. Neither campaign in this race has done so, which we see as a troubling omission.

In recent weeks, the Leonard-Khan campaign has been muddled by three major controversies, including allegations of ableism, claiming credit for work done by organizations such as the Georgetown Scholars Program (GSP) and co-opting former speaker Melanie Cruz-Morales’ identity, according to a public Instagram story obtained by The Hoya.

The campaign has since released a statement clarifying the circumstances of these allegations and told The Hoya that they had met with the students who raised these concerns to apologize. While Leonard and Khan indeed acknowledged their past mistakes, their statement proposed no new changes to prevent similar future conflicts.

While The Hoya cannot independently verify these allegations, the number of students within GUSA speaking out against the Leonard-Khan ticket certainly calls into question their touted relationship-building skills and ability to govern with integrity.

The Leonard-Khan campaign also prioritizes performativity while embodying the vast disconnect between GUSA representatives and the student body. Their use of “trendy” catchphrases to “gaslight” the administration and bizarrely “gatekeep” student rights — whatever that means, because it’s never explained — is further evidence of how out of touch they are with campus culture.

The profound weaknesses in both tickets is emblematic of GUSA’s continued failure to fix its own internal issues and external reputation.

For these reasons, the Editorial Board encourages students to use the write-in option instead. We call on students to reject both options for GUSA executive, and hope that new students with bold and specific policies will launch their own grassroots campaigns for the GUSA executive election. Students deserve honest, effective leadership capable of bringing about necessary change for both students and GUSA as an institution.

The Hoya’s editorial board is composed of six students and is chaired by the opinion editors. Editorials reflect only the beliefs of a majority of the board and are not representative of The Hoya or any individual member of the board.