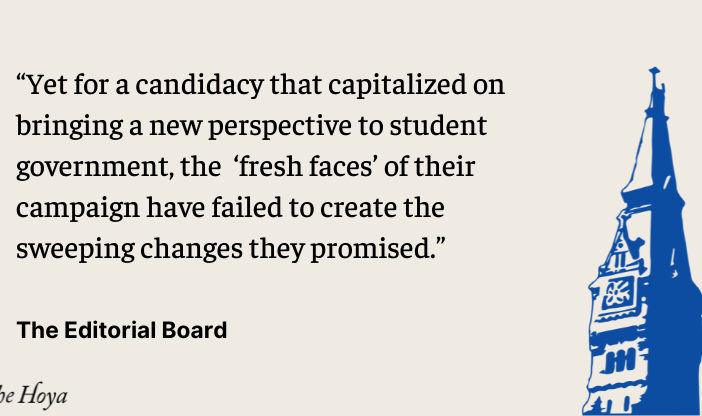 After starting their term with one of the more controversial executive elections in recent history, Georgetown University Student Association (GUSA) President Kole Wolfe (SFS ’24) and Vice President Zeke Ume-Ukeje (COL ’24) have sailed through their term without rocking the boat. Or even affecting its course.

Despite concerns among students and the GUSA Senate about what their tenure would bring, the pair have upheld the duties of the positions to which they were elected. Yet for a candidacy that capitalized on bringing a new perspective to student government, the “fresh faces” of their campaign have failed to create the sweeping changes they promised.

Last fall, the previous administration failed to abolish GUSA, marking a low point for the organization. When they announced their campaign in January, the Wolfe-Ume-Ukeje ticket felt like the death knell. Even The Hoya’s Editorial Board was highly skeptical about the future of the GUSA executive, choosing not to endorse any of the official tickets in last spring’s election cycle.

The duo’s election campaign was plagued by public doubt, as they found themselves under fire for their lack of experience, along with allegations of unethical campaign tactics that included exchanging alcohol for votes, which both Wolfe and Ume-Ukeje have denied. Their campaign positioned them as underdogs by accusing the Elections Committee of being biased against their campaign, and their election led to a motion for impeachment from the Elections Commissions for campaign violation as well as calls to restructure the GUSA elections process.

Yet eight months later, GUSA has returned to business as usual, spearheaded by their presidency. The executives’ bombastic beginning has yielded lackluster results.

In this week’s interview with The Hoya, Wolfe and Ume-Ukeje did not mention Student Neighborhood Assistance Program (SNAP) or clubs as a part of the work that they have accomplished thus far. With regard to communication, GUSA sent the semester’s first edition of its biweekly newsletter, which typically contains updates on the organization’s advocacy efforts and involvement in campus affairs, only on October 13th.

Wolfe acknowledged that there is still space for improvement, explaining that he and Ume-Ukeje are limited in the amount of change they can actually create.

“There was so much sensationalist commentary surrounding our election or our ascendancy into this position, but at the end of the day, it really is just student government,” Wolfe told The Hoya.

Still, Wolfe and Ume-Ujeke have set important changes in motion, showing their investment in responding to student needs. The pair told The Hoya that their biggest accomplishment so far has been improving food accessibility on campus. This semester, the pair advocated for extending the hours of Epicurean & Company, a campus dining location. Wolfe said that meetings with students showed the need for increased dining options on campus.

“A lot of conversations that we would have with students always circled back to the lack of available dining options on campus, especially late at night and during breaks,” Wolfe said.

In their response to these needs, Wolfe and Ume-Ukeje said they pushed the university to allow students to use meal swipes at the location, extend Epi’s hours, and keep the dining location open during university breaks. Ultimately, these efforts were successful, but credit does not lie solely with the current administration: in fact, the pair’s predecessors in the GUSA executive passed a motion supporting the expansion of dining hours at the location.

The pair also highlighted other actions they have taken while in office that followed through on their campaign promises, such as their representation of student opposition to the mask mandates in certain common areas. Ume-Ukeje also noted his service on the Reconciliation Fund Awards Committee, which works to allocate funding related to the university response to the GU272 referendum. A university spokesperson did not comment on the role the two played in the administration’s decision-making process.

For the future, Wolfe and Ume-Ukeje discussed their interest in providing students with free access to newspaper subscriptions under the collegiate readership program and their ongoing efforts to create, in collaboration with student senators, a GUSA statistics agency to measure and track student sentiment.

Brought Back to Reality

While their accomplishments are commendable improvements for the campus community and their plans for the future would build positively on these contributions, the pair’s lack of GUSA experience caused the realization that the realities of their jobs did not match their expectations.

“During our campaign, we had some ambitious proposals, but I think a lot of what we realized was that our position doesn’t necessarily always grant us direct power to get things done,” Ume-Ukeje told The Hoya.

To help them transition to GUSA smoothly, the pair decided to retain most of the staff from the previous GUSA administration.

“I feel like we just sort of had the mentality of ‘We’re gonna try to get everyone that really wants to do the work to stay on board and to continue to be involved,’ and try to build good relationships from that,” Wolfe said.

They also affirm that they do not want to pursue a third attempt at holding a referendum to restructure GUSA, despite their stated commitment to introduce similar legislation this semester. Their reasoning for initially supporting the referendum was to combat inefficiency in the Senate, which they say manifested itself in the form of infighting. But Wolfe said since their term began, the atmosphere in the GUSA Senate has improved considerably, limiting the need for a restructuring.

“I think originally the goal of the restructure was to make the atmosphere a better place and something that more younger people wanted to be a part of, to sort of get participation and overall perception of GUSA out of the gutter. So as of right now, I don’t really see any reason to recontinue those efforts,” Wolfe said.

Thus, despite the heightened controversy hat surrounded their ascension to office, the Wolfe-Ume-Ukeje administration continues to perpetuate GUSA’s inefficiencies. Despite some important contributions, the pair’s lack of experience is evident as their plans for sweeping change fizzled out into tedium when going through the existing motions of coordinating students’ needs, the university administration and Senate proceedings.

The Hoya’s Editorial Board is composed of six students and is chaired by the Opinion Editors. Editorials reflect only the beliefs of a majority of the board and are not representative of The Hoya or any individual member of the board.