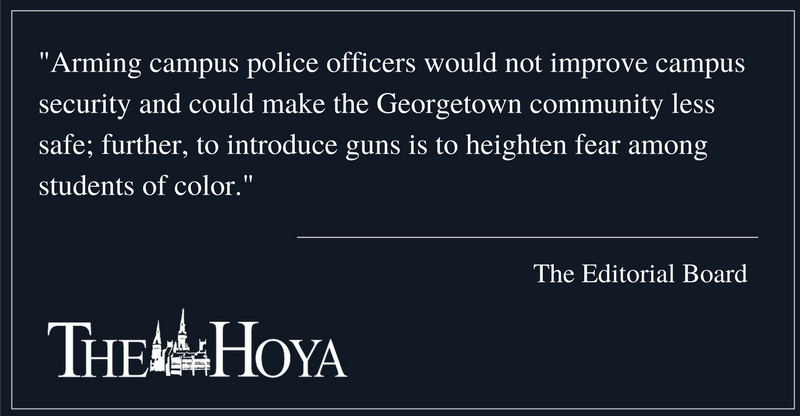 Bringing guns onto Georgetown University’s campus is a potentially dangerous solution to a problem that has already been addressed.

Georgetown is already well-equipped to handle such a situation; arming GUPD officers is unnecessary and could put the Georgetown community — especially students of color — at risk. Georgetown must stand by its current policies to ensure the safest possible campus for the community.

Under current GUPD protocol, the department regularly conducts active-shooter drills with the Metropolitan Police Department. In an active-shooter situation, GUPD officers would be responsible for alerting the MPD, which would send armed officers to campus.

Peer institutions in Washington, D.C., including The George Washington University and American University, share this protocol.

Georgetown should not deviate from the status quo policies that address the minor risk of a shooting. If an active shooter were on campus, MPD is fully capable of resolving the situation quickly and effectively.

In the past, GUPD has proven capable of apprehending armed individuals by itself.

In May 2015, Officer Scott Connor, Sgt. Fred Johnson and Sgt. Joe Twiggs disarmed and detained an armed person who had robbed a student at gunpoint near the McDonough School of Business and fled to the Leavey Center. No one was injured during the arrest.

Although an armed robbery is a less dangerous scenario than an active shooter situation, GUPD’s actions represent an ability to de-arm dangerous people.

The officers were not armed when they apprehended their suspect. If they were, the suspect, the officers and everyone surrounding the arrest would have been at risk of unnecessary violence. Studies into the behavior of armed police have shown officers are inclined to use guns even when they do not need to.

“A full third of police shootings nationwide are cases in which the suspect was unarmed or cases where police could have avoided putting themselves in harm’s way,” according to a Tampa Bay Times investigation.

Armed university officers have used unnecessary force against innocent people in the past, creating reasonable concern guns could bring violence to campus.

In 2015, Samuel DeBose, an unarmed black man, was fatally shot by a University of Cincinnati police officer after the officer pulled him over for a missing front license plate. The officer, Ray Tensing, testified that he feared for his life.

Arming GUPD would put individuals on campus at risk — most notably students of color.
Implicit bias affects all the decision-making of all individuals, according to a report by the Kirwan Institute for the Study of Race and Ethnicity at Ohio State University. These biases result in the disproportionate violation of the rights of black people.

Arming campus police officers would not improve campus security and could make the Georgetown community less safe; further, to introduce guns is to heighten fear among students of color.

“I am confident that President DeGioia, as well as Chief Gruber, would go to great lengths to train their officers in applying the law equally,” Collins said in an interview with The Hoya.

However, the effectiveness of implicit bias training among police officers is unclear, according to The Atlantic’s December 2017 analysis of such programs in several police departments across the country.

“Few specific guidelines exist for what courses should include, how the material should be taught, or how to measure its effects. Indeed, little data exist about their efficacy over the long term,” according to the report.

GUPD officers have perpetrated racist policing in the past. In January 2017, two GUPD officers stopped and physically restrained Clarence Wesley, a black facilities worker, while he was leaving New North, according to the Georgetown Voice. Detectives told Wesley the officers were concerned he was armed.

Although the students of GUARD are motivated by an intention to make Georgetown safer, their proposal would carry the opposite effect.

To protect the on-campus community — particularly already-vulnerable students — Georgetown must keep its existing protocol and refuse to arm GUPD.