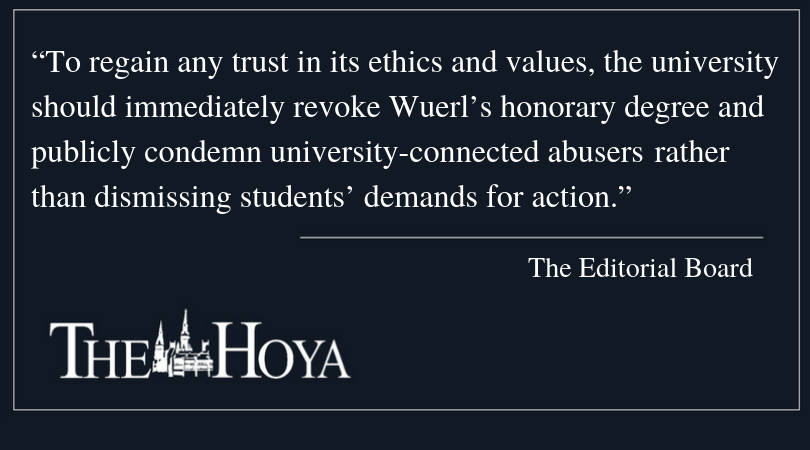 This editorial discusses sexual abuse. Please refer to the end of the article for on- and off-campus resources.

In 2009, Georgetown University and Fordham University were both notified of a sexual predator who had taught at both institutions. While Fordham immediately banned the predator, Fr. Daniel O’Connell, S.J., from campus, Georgetown failed to take substantial action until just weeks ago.

Georgetown’s delayed response to credible allegations of sexual assault against O’Connell follows a trend of unreasonably long delays in responding to university-connected clerical abuse: at every opportunity, the university has fallen short in condemning perpetrators.

Despite a 2018 Pennsylvania grand jury report documenting former Cardinal Theodore McCarrick’s abuse and Cardinal Donald Wuerl’s complicity in these crimes, Georgetown only rescinded McCarrick’s honorary degree after he was laicized in February — seven months after the report was released — and has not revoked Wuerl’s honorary degree.

Georgetown’s consistent failure to take moral responsibility and act on allegations of clerical abuse connected to the university stands out among the proactive responses of other Catholic universities.

Six Catholic universities, including Fordham and the Catholic University of America, revoked honorary degrees previously awarded to McCarrick within days of the August release of the grand jury report. Georgetown, however, only rescinded McCarrick’s degree Feb. 19 — three days after the Vatican expelled him from the priesthood.

Compared to the swift and transparent responses of other Catholic universities, Georgetown’s seven-month delay in condemning McCarrick and its continued failure to rescind Wuerl’s degree is an embarrassment to students; by Sept. 21, 1,376 students signed a petition calling on the university to immediately revoke both honorary degrees, but the university blatantly dismissed these demands.

Instead of immediately revoking the degrees, Georgetown formed a working group in October 2018 to evaluate McCarrick’s honorary degree and organized three dialogues on clerical abuse, an entirely underwhelming response without the revocations of both degrees.

Though other Jesuit universities have not yet revoked Wuerl’s degree, if Georgetown became the first Jesuit university to do so, it could regain some credibility as a leader among Catholic institutions and set a precedent for addressing complicity in clerical abuse.

Georgetown must also act on credible allegations of sexual assault as they arise by immediately severing any connections to the accused perpetrator.

Though Georgetown was informed in 2009 of credible allegations of abuse against O’Connell, the university failed to remove his professor emeritus title until March 13, eight days after The Hoya reached out for comment on his status.

In stark contrast to Georgetown’s intentional inaction, other Jesuit institutions where O’Connell worked, St. Louis University and Fordham, have taken actions to grapple with their past association with predators.

As other Jesuit universities publicly acknowledge university-affiliated abusive priests, Georgetown has no excuse for its consistent apathy and negligence in condemning clerical abuse.

Last month, The Hoya published an investigation identifying 14 university-connected Catholic leaders credibly accused of sexual abuse, 10 of whom the Office of the President and the Office of Campus Ministry have still not publicly recognized.

Rather than condemning these priests, the university released a vague statement on its website stating that none of the abuse occurred at Georgetown.

Regardless of where the abuse occurred, however, these 14 Catholic leaders were all members of the Georgetown community in various capacities. With such an outrageously indifferent response, the clerical abuse ingrained in university history cannot be adequately addressed

By publicly denouncing these priests, the university would at least address over 10 years of complicity in perpetuating a culture that silences survivors and protects abusers.

To regain any trust in its ethics and values, the university should immediately revoke Wuerl’s honorary degree and publicly condemn university-connected abusers, rather than dismissing students’ demands for action.