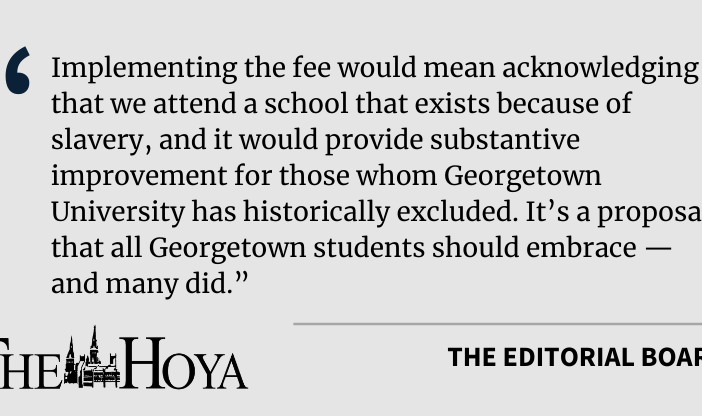 Georgetown University must follow through on its commitment to atone for its history with slavery, and students should direct new energy toward GU272 advocacy at Georgetown.

The GU272 referendum — named for the 272 enslaved people that the Maryland Province of the Society of Jesus sold in 1838 to finance the university’s construction — called for Georgetown to institute a $27.20 semesterly student fee whose proceeds would create a fund to benefit descendants of those original 272 enslaved people. Although Georgetown students voted to approve the GU272 referendum by a nearly 2-to-1 margin in April 2019, university officials have not yet established the reconciliatory payments that the student body endorsed. Georgetown students must support the GU272 advocacy team and pressure the university — with social media campaigns and other forms of virtual protest — to follow through with this necessary action.

Georgetown initiated its efforts to recognize the 272 enslaved people in the summer of 2015, when it launched the Working Group on Slavery, Memory, and Reconciliation to examine the university’s ties to slavery and recommend action to address its shameful history. A year later, University President John J. DeGioia (CAS ’79, GRD ’95) released the committee’s findings in a 104-page report. The group made several recommendations to the university, including renaming several campus buildings and establishing admissions and financial aid initiatives for the descendant community.

The university enacted several of these reforms in March 2017. It renamed two buildings — which were formerly named for members of the Maryland Province of the Society of Jesus who sold the 272 enslaved people — after Isaac Hawkins, one of the 272, and Anne Marie Becraft, a 19th-century Black nun and teacher. Georgetown also established an institute to study slavery’s legacy at the university and committed to offering legacy admission status for the descendant community. However, the university did not take such immediate action to address the committee’s more costly financial aid recommendation.

In recognition of the committee’s financial aid recommendation, senators in the Georgetown University Student Association first approved the referendum on a reconciliatory student fee in February 2019.

The proposed fee — though small — would have been of immense value to the Georgetown community, as GU272 activist Mélisande Short-Colomb (COL ’21) explained in a Viewpoint for The Hoya. Implementing the fee would mean acknowledging that we attend a school that exists because of slavery, and it would provide substantive improvement for those whom Georgetown has historically excluded. It’s a proposal that all Georgetown students should embrace — and many did.

Two years later, the university still has not established the student-approved fee, though it committed to a different $400,000 fund for the descendant community using outside financing. Still, Georgetown’s lack of clear communication about the fund’s function and implementation, as well as its divergence from the student-approved plan, snubs student activism, as GUSA President Nicolo Ferretti (SFS ’21) wrote in an email to The Hoya.

“The university has not been open to changes that would affect its budget or reputation, and the GU272 referendum is both,” Ferretti wrote. “Those who stay in the know through articles from campus media and their own advocacy have been deeply disappointed by the university’s failure to carry out the mandate from the referendum.”

Students must continue to build on the activism that brought the initial referendum success by pressuring university leadership. They must push for transparency from the university regarding the fund it created. Georgetown has already initiated a fund for reconciliatory payments, intended to operate like the student-proposed fee regime, according to a university spokesperson.

“As an initial step, a fund — with financial resources that will meet the $400,000 commitment the University made in October 2019 (based on the amount of the proposed student fee) — has been established,” the spokesperson wrote in an email to The Hoya. “While mandatory fees will not be collected, we will be inviting all members of our community to contribute to the fund.”

However, student leaders and The Hoya received this same response nearly four months ago in a meeting with the university’s Working Group on Student Affairs. Beyond simply failing to meet the standards set by the student body, this vague messaging lacks transparency and has consistently confused student leaders. Georgetown’s administration must offer more details about the future use of its fund as well as the timeline for its implementation.

Further, student leaders should be prepared to pressure the university to take action and go farther on the important issue of reconciling its history with enslavement, according to Makayla Jeffries (COL ’23), a GUSA senator for the Class of 2023.

Advocacy will certainly be difficult on the virtual platform, and students may not be enthusiastic about mobilizing in support of another fee. But the reconciliatory fund is of immense importance to the student body, as student leaders made clear at The Blaxa Town Hall this week. Further, the fee itself is miniscule compared to the 4% tuition increase students will pay anyway in the 2021-22 academic year. Student pressure through media campaigns and virtual class boycotts are an important way to accomplish such a significant goal, as Short-Colomb said in an interview with The Hoya.

“You have power as a student,” Short-Colomb said. “Because pressure is what blows up a pipe. Not namby-pamby conversations — pressure.”

Georgetown must go further and fully achieve the goals of the GU272 referendum, but in the absence of this action, students must continue to pressure the university to finally rectify its history with enslavement.

The Hoya’s Editorial Board is composed of six students and is chaired by the Opinion editor. Editorials reflect only the beliefs of a majority of the board and are not representative of The Hoya or any individual member of the board.