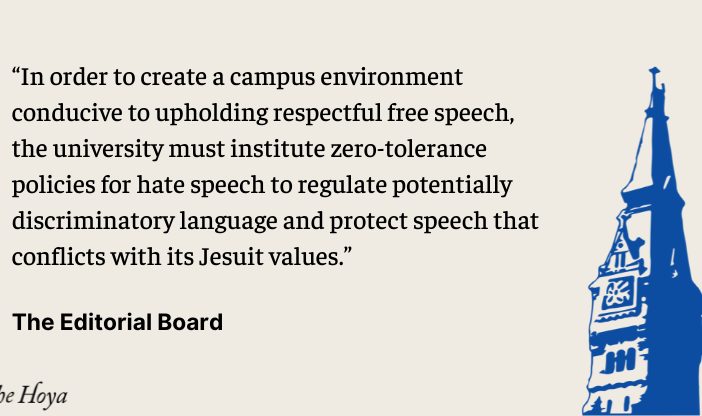 In a campus community as vibrant and diverse as Georgetown, policies regarding free speech and expression are of paramount importance.

Despite Georgetown University’s Speech and Expression Policy, in the last month countless flyers put up by Students for Justice in Palestine (SJP) were repeatedly ripped down from Red Square, a clear violation of the university policies.

Additionally, in the fall 2021 semester, Georgetown Right to Life (RTL) alleges that their chalk messages were defaced and scrubbed off in Red Square, the designated free speech zone on campus.

Though these specific incidents involve speech suppression, they reflect a larger problem involving a lack of clarity and specificity in free speech policies, specifically when it comes to hate speech and speech conflicting with the university’s religious beliefs.

Therefore, the Editorial Board urges the university to uphold its commitment to free speech by implementing new zero-tolerance rules on hate speech and instituting explicit protections for speech even if it conflicts with Catholic teachings.

The Speech and Expression Policy outlined by the university’s Division of Student Affairs explains what constitutes free speech, the rules of conduct for Red Square and consequences for suppression of free speech; such suppression consists of interrupting events or speeches, removing flyers from public spaces or curtailing student expression in any other way.

Additionally, in a March 15 email to students after a request from an SJP representative, Interim Vice President for Student Affairs Jeanne Lord summarized the university’s speech policies in generalized terms and emphasized the importance of respectful dissent, yet does little to explain the guidelines surrounding hate speech.

“Our Speech and Expression Policy guides our efforts to ensure the thoughtful exchange of ideas and information and posits that the remedy for extreme or offensive ideas is not less speech, but more speech,” Lord wrote in the email.

This email or the university’s speech manual do not clearly delineate between free speech and hate speech nor do they express any difference in the ways this speech is treated.

“It is not the proper role of a University to insulate individuals from ideas and opinions they find unwelcome, disagreeable, or even deeply offensive,” the Speech and Expression Policy reads.

While the university should certainly not suppress unpopular speech or opinions, it must also more clearly define hate speech to exclude racist, homophobic or otherwise prejudiced comments as protected speech on campus. Students should not be ignorant to disagreeable or opposing ideas, but they are also not obligated to assume the responsibility of the university to address “deeply offensive” and potentially discriminatory speech.

Though this may be the case, it is vital that the university implement more stringent, zero-tolerance guidelines for blatantly hateful speech, rather than framing all “deeply offensive” speech in generalized terms.

In addition to this insufficient delineation between hate and free speech, the university must update its policies to include protection of speech that might conflict with its Jesuit identity.

Though the university consistently references its Jesuit identity as a guiding factor in its policymaking, the Speech and Expression Policy conspicuously makes no mention of how this identity impacts decisions regarding speech that violates its central tenets, despite past incidents in which the university explicitly restricted free speech for this purpose.

For instance, in January 2020, the university prohibited H*yas for Choice, an unrecognized student pro-abortion rights group, from holding an abortion education workshop in an on-campus location, forcing the group to move to a location in downtown Washington, D.C. A university spokesperson at the time explained that Georgetown does not allow abortion demonstrations, given that it is in direct conflict with its Jesuit identity.

Since then, the manual has not been updated to reflect any kind of change or notice about this policy, creating an opportunity to divide the student body with future conflicts and further limitations of speech. In order to truly uphold its ideals of freedom of speech and to facilitate open campus dialogue, the university must not limit speech to that which is aligned with its religious values, but rather accept all forms of respectful and civil dialogue.

While the university attempts to educate students on free speech through New Student Orientation sessions and events from the Free Speech Project, more can be done to inform the student body of specific university policies of free speech, as well as how to engage in civil discourse with their fellow students and organizations.

For instance, the university already requires online pre-orientation training for several topics and issues as part of its HoyUS program. The program should expand its mandatory training, including sessions on specific university free speech policies, as well as engaging in civil and respectful discourse for new or incoming students. Iowa University already mandates such training for all of its students, as required by state law. Regardless of whether law necessitates it or not, Georgetown can easily do the same. By instituting these new training programs, students would be able to engage in more respectful, informed dialogue without unknowingly violating university policy.

In order to create a campus environment conducive to upholding respectful, free speech, the university must institute zero-tolerance policies for hate speech to regulate potentially discriminatory language and protect speech that conflicts with its Jesuit values.

The Hoya’s Editorial Board is composed of six students and is chaired by the Opinion editors. Editorials reflect only the beliefs of a majority of the board and are not representative of The Hoya or any individual member of the board.