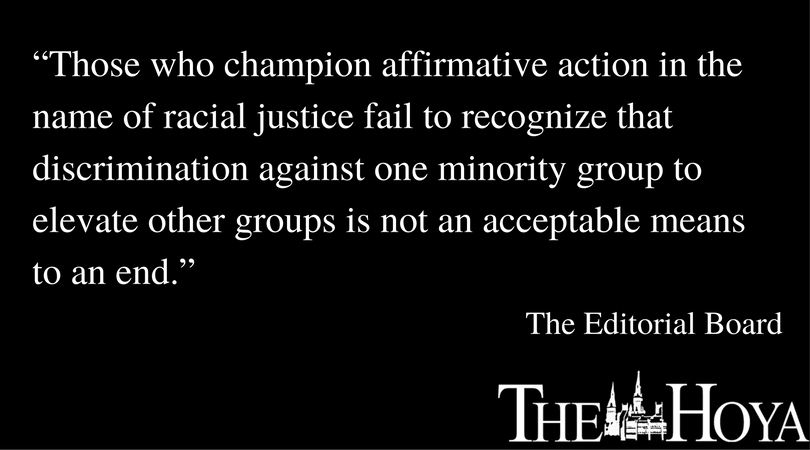 As admissions season gets underway, nearly 20,000 hopeful students will vie for a spot in the Georgetown University Class of 2022. Last year, a mere 15.4 percent of the 21,465 applicants were accepted.

In this admissions cycle, Georgetown should evaluate applicants on their merit alone by ceasing the practice of race-based affirmative action in its admissions process. This practice not only discriminates against particular demographics of students, specifically against fully qualified Asian students, but also perpetuates racist attitudes toward Asians.

This editorial board believes that all students deserve a fair chance to be admitted to competitive universities based only on their merit as applicants.

Affirmative action in university admissions was first implemented in the 1960s to redress the significant disadvantages that minority students often faced as a result of centuries of starkly discriminatory policies. Nevertheless, lifting up some minority groups by disadvantaging others does not achieve the idea of racial justice that this policy set out to accomplish.

But empirical data demonstrates this discrimination against Asian-American students. A study conducted by Princeton University shows that applicants of comparable qualifications who identify as Asian must score 140 points higher on the SAT than white applicants to have the same chance of admission to private colleges, as The New York Times reported.

Proponents of affirmative action argue that this disparity is a result of universities’ desire to maintain holistic and diverse classes, which requires consideration of more than just academic ability.

However, the blanket discrimination against Asian-American students in the admissions process ignores the enormous diversity within this label. This diversity undermines the argument that affirmative action is intended to foster greater diversity in universities.

Looking past the label of “Asian-American,” it becomes  evident that there are historically disadvantaged populations in the group itself. Thirty percent of all Americans over the age of 25 have a bachelor’s degree, according to the Pew Research Center. While 72 percent of Indian-Americans have a bachelor’s degree or a higher degree, the numbers are anemic for  Laotian-Americans, at 16 percent, and Bhutanese-Americans, at 9 percent, the center found.

Moreover, as The New Yorker explains, the diverse class argument would only be plausible if Asian-American applicants overall were significantly less likely than other applicants to have the particular, often abstract, nonacademic qualities that universities look for, such as leadership and a willingness to take initiative. This notion only serves to perpetuate the racist myth of the “model minority,” which uniformly depicts all Asian-American students as academically achieving individuals who are stunted in other areas.

In addition, a comparison of Asian-American enrollment at universities before and after they ceased affirmative action policies indicates that the policy disproportionately hurt this group of students, as is clear from the work of David Colburn, a professor and former provost at the University of Florida.

Colburn’s work found that at selective public universities that ended race-based affirmative action, such as the University of Florida and the University of California, Berkeley, the proportion of Asian Americans increased dramatically after the policy’s termination.

For example, the proportion of Asian American freshmen at Berkeley rose to from 37.3 percent in 1995 to 46.6 percent in 2005. California barred affirmative action in university admissions processes in 1996.

As is empirically evident, affirmative action discriminates against Asian-Americans. The system of college admissions masks itself as a meritocracy but in practice is suppressing a historically marginalized minority group in the name of racial justice.

Those who champion affirmative action in the name of racial justice fail to recognize that discrimination against one minority group to elevate other groups is not an acceptable means to an end; as such, race-based affirmative action must end.