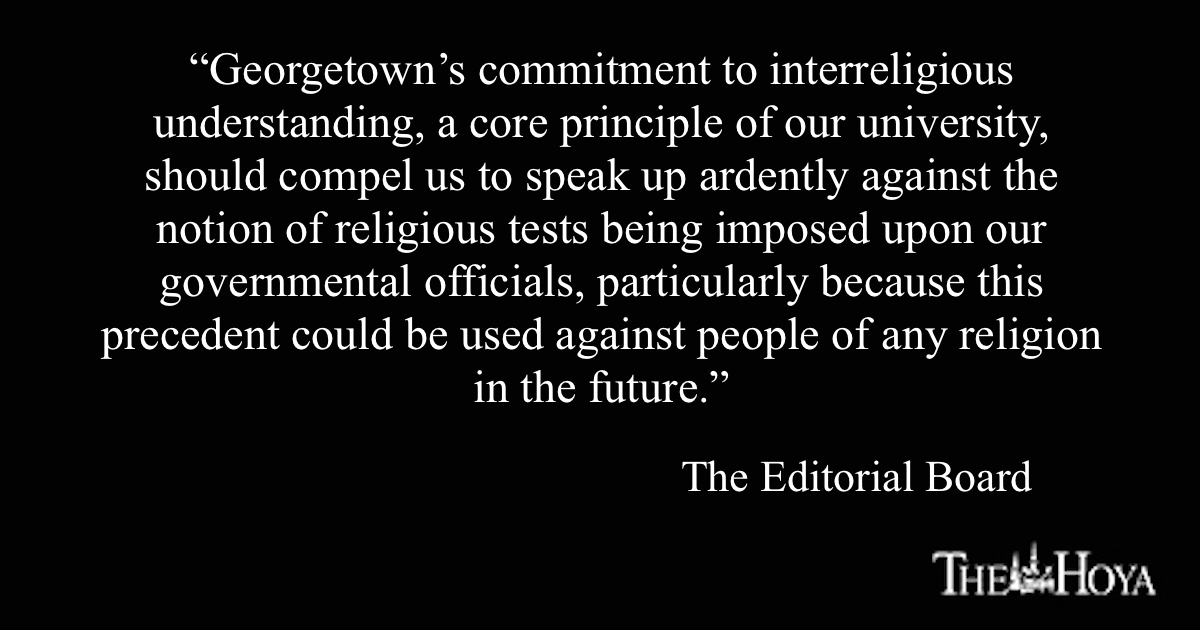 Last Wednesday, Amy Coney Barrett, one of President Donald Trump’s 7th Circuit Court of Appeals nominees for a judgeship, sat before the Senate Judiciary Committee for her confirmation hearing. During the questioning, several members of the committee, including Sen. Dianne Feinstein (D-Calif.), implied that Barrett’s Catholic faith would compromise her impartiality on the bench.

Barrett, a law professor at the University of Notre Dame Law School and a former clerk for the late Supreme Court Justice Antonin Scalia (CAS ’57), has since made news for the events at the hearing. In particular, Feinstein was criticized for her assessment that “the dogma lives loudly within [Barrett], and that’s of concern when you come to big issues.”

Since the hearing, the University of Notre Dame — Barrett’s alma mater and one of the country’s most prominent Catholic institutions — and Princeton University have both released letters condemning Feinstein and the Judiciary Committee’s questions, with Princeton’s letter noting that the line of inquiry constituted a religious test.

As a leader among Catholic and Jesuit universities, Georgetown University — specifically, the Office of the President John J. DeGioia — should follow Notre Dame and Princeton’s example and issue a statement condemning the line of questioning posed to Barrett and reaffirming the notion that religious tests have no place among our public officials.

Barrett’s religious convictions were initially raised at the hearing by Sen. Chuck Grassley (R-Iowa), who serves as chairman of the committee, and the persistent questioning was continued by several members of the committee. Democratic Sen. Dick Durbin (SFS ’66, LAW ’69) of Illinois, for example, directly asked the nominee: “Do you consider yourself an orthodox Catholic?” Barrett responded that she “would commit, if confirmed, to follow unflinchingly all Supreme Court precedent.” The nominee also stated that “it’s never appropriate for a judge to impose that judge’s personal convictions, whether they arise from faith or anywhere else, on the law.”

The aggressive line of questioning posed by Feinstein, Sen. Sheldon Whitehouse (D-R.I.), Sen. Mazie Hirono (D-Hawaii) and Sen. Al Franken (D-Minn.) constitutes a religious test, and this is an unacceptable practice for our elected and nominated officials to face. As is clearly stated in Article VI, Section 3 of the Constitution: “No religious test shall ever be required as a qualification to any office or public trust under the United States.”

Additionally, Feinstein’s implication that Barrett would substitute her own religious convictions for the law is not only presumptuous but also starkly ignores Barrett’s answers in the hearing and her past writings.

For example, several of the senators took issue specifically with a 1998 paper Barrett wrote with John Garvey, now president of Catholic University, which explored the conflict between Catholic values and the enforcement of the death penalty as a responsibility of the judiciary. Yet, that paper concluded that “judges cannot — nor should they try to — align our legal system with the Church’s moral teaching whenever the two diverge” and suggested recusal as a possible solution to the conflict.

Furthermore, the committee’s inquiries into Barrett’s religion, rather than her personal experiences or abilities as a jurist, seem to imply a mutual exclusivity between impartiality and Catholic values — and even religious convictions more generally. This implication sets a dangerous precedent for religious tests to be imposed on public officials in the future.

Georgetown’s status as a prominent Catholic university — as well as our position in our nation’s capital, mere miles away from the heart of our judiciary — obliges us to stand up for all individuals’ right to their religious values, particularly when their Catholic beliefs are used against them. Thus, we should join Notre Dame and Princeton as universities willing to lead the charge in defense of religious and Catholic values.

Moreover, Georgetown’s commitment to interreligious understanding should compel us to speak up ardently against the notion of religious tests being imposed upon our governmental officials, particularly because this precedent could be used against people of any religion in the future.

The questions posed to Barrett clearly constituted an unacceptable religious test, which is not only antithetical to our Constitution but also sets a dangerous precedent that could be used to target religious people of all faiths. To live up to its reputation as one of the nation’s pre-eminent Catholic institutions, Georgetown must swiftly condemn this transgression, which threatens some of our most closely held beliefs.