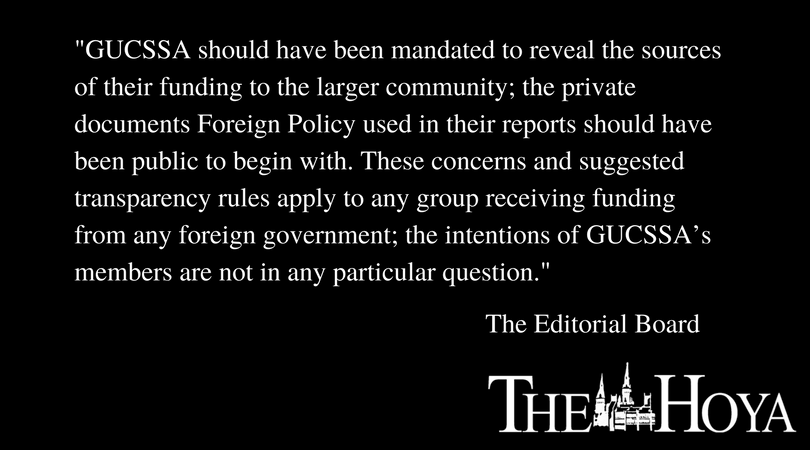 When Georgetown University student groups work with foreign governments, the wider community should not find out from national news.

Last week, by obtaining private documents, Foreign Policy magazine reported the Chinese government has provided substantial funding for Georgetown University Chinese Students and Scholars Association, a graduate student chapter of the national CSSA. Until the report, the wider Georgetown community was not made aware of any link between GUCSSA and the Chinese government.

To ensure the intellectual freedom of all students and faculty, recognized student groups should be required to detail the nature of their relationship — financial and otherwise — with foreign governments or officials.

China’s past infiltration of American universities has perpetrated a spread of misinformative propaganda. Over 100 schools, including The George Washington University, host “Confucius Initiatives,” Chinese government-funded educational institutions purportedly designed for teaching Chinese culture, language and history, according to Politico. In reality, China uses these initiatives to advance a distorted view of the country’s history — human rights abuses are ignored, and the courses promote the narrative that Taiwan and Tibet are part of China.

A 2011 speech by Li Changchun, a former member of the Chinese Politburo Standing Committee, is cited in Politico as saying institutes are an “important part of China’s overseas propaganda set-up.” Changchun’s candor reveals the legitimate concern created by the presence of Chinese-funded programs on U.S. campuses: Students and faculty are unknowingly exposed to propaganda misrepresenting Chinese history.

Though Georgetown is not home to a Confucius Institute, the national CSSA, which has a chapter on campus, has its own record of coordinated propaganda. Chapters of the organization have “worked in tandem with Beijing to promote a pro-Chinese agenda and tamp down anti-Chinese speech on Western campuses,” according to a 2017 New York Times report.

China donated $1,600 to GUCSSA in 2011, which was mainly used for planning events such as a Lunar New Year party. While these donations are not illegal or against university policy, the Chinese Communist Party’s past efforts to influence U.S. universities indicate suspicious motives.

Georgetown’s CSSA chapter does not stand accused of coordinating a propaganda strategy with the government of China, nor does this editorial board intend to levy such a charge. Additionally, “Georgetown has no rule against student groups receiving money from foreign governments,” Kylie Navarro (COL ’20), chair of the Student Activities Commision, told The Hoya.

This policy must be reversed. GUCSSA should have been mandated to reveal the sources of their funding to the larger community; the private documents Foreign Policy used in its reports should have been public to begin with. These concerns and suggested transparency rules apply to any group receiving funding from any foreign government; the intentions of GUCSSA’s members are not in any particular question.

On Feb. 19, members of the Georgetown University Student Association and several on-campus groups for Asian-American and international students wrote an open letter to University President John J. DeGioia, also provided to The Hoya. The authors argue FBI Director Christopher Wray’s recent testimony to the Senate Intelligence Committee, in which he said some college students and faculty are spies, has caused “great stress and fear” in the lives of Georgetown’s Chinese students.

The authors’ concerns are certainly valid, and this editorial board does not seek to associate individual students with the actions of their governments. Rather, the questions around GUCSSA’s funding shed light on a system enabling secretive relationships between student groups and governments.

In addition to the promulgating of propaganda, foreign influence on student groups can also place international students under undue scrutiny.

Anne-Marie Brady, a fellow at the Woodrow Wilson International Center for Scholars, says CSSA chapters represent a “deliberate strategy to make sure that the Chinese students and scholars living abroad don’t become a problem” for their home government, according to Foreign Policy.

Authoritarian regimes with on-campus presences have positioned themselves to more easily spy on — and openly criticize — students.

To effectively protect students and faculty from foreign propaganda, SAC and the Georgetown University Graduate Student Government should require all student groups to publicly disclose any relationships they have with foreign governments.