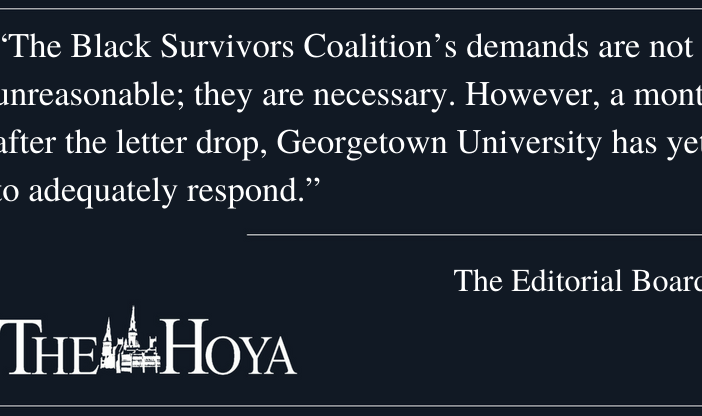 This Editorial discusses sexual assault on campus. Please refer to the end of the article for on- and off-campus resources.

Georgetown’s failure to commit to activists’ demands is entirely unacceptable. The university must immediately present tangible plans to bolster support for Black survivors. Moreover, Georgetown’s lack of respect for BSC and Black survivors on campus throughout the #GeorgetownDoesntCare campaign has been inexcusable.

BSC first presented its demands by delivering a letter to the Office of the President on Jan. 27, calling on the university to better support Black women survivors, according to Makayla Jeffries (COL ’23), one of the organizers of the #GeorgetownDoesntCare campaign. The letter outlined 10 specific demands, including calls to hire a Black clinician, establish a women’s and gender studies department and provide a 24/7 crisis response center.

These demands are not unreasonable; they are necessary. However, a month after the letter drop, Georgetown has yet to adequately respond.

By implying that the university was committing to sufficiently address every demand, the email was misleading for students who have not been at the sit-in.

“I think we’re doing a disservice to the rest of the community to send an email like that out because there’s discrepancies that happen here. Not everyone can be here,” Nile Blass (COL ’22), a student organizer, said in an interview with The Hoya.

As the sit-in continues, Georgetown claims it is listening to survivors, a university spokesperson wrote in an email to The Hoya.

“Georgetown University takes seriously the concerns of student survivors and we are committed to learning more about their experiences both at Georgetown and outside of the university,” the spokesperson wrote.

However, many of the university’s promises were vague and provided no tangible goals. This lack of specificity is unacceptable; students deserve concrete plans to which they can hold the university accountable. Despite failing to even address several demands, the university has continued to claim it has survivors’ best interests in mind.

These demands are nothing new. The Georgetown S.T.O.P. Coalition, which advocates for Black women survivors of sexual assault, led a campaign calling for more support for Black survivors in spring 2019. Georgetown has had more than a year to address student concerns, yet its continued failure to improve on this issue shows the university is either incapable of sufficiently supporting survivors or does not care enough to do so.

In interacting with the Black Survivors Coalition’s #GeorgetownDoesntCare campaign, the university has not only continued to offer inadequate support for survivors, but has also demonstrated an alarming lack of respect for Black women on campus.

In BSC’s Jan. 27 letter, the organization called for a public response by Jan. 31. Instead of directly responding to the group, however, Georgetown chose to email leaders in Black student organizations and did not publicly address the university community.

Nothing can excuse the university’s failure to respond directly to BSC. Georgetown’s assumption that reaching out to other Black student organizations was equivalent to directly responding to BSC indicates the university treats Black student groups as interchangeable. This lack of respect for student organizers who are working on the #GeorgetownDoesntCare campaign is simply unacceptable.

BSC did not hear directly from the administration until after the sit-in had begun and university Vice President Joseph Ferrara invited them to meet.

“We didn’t get shit,” Blass said. “And then we start occupying the space and Ferrara comes out and he’s like, ‘DeGioia would like to speak with you all,’ and then we have a meeting with all the administrators.”

Students shouldn’t have to organize a sit-in for the university to finally show interest in better supporting Black women survivors.

In meetings between BSC and university administrators, the university specifically invited Black women who work for the university in capacities completely irrelevant to the topics of the meetings, according to Blass.

Georgetown’s parading of Black women into meetings solely to show that it employs Black women demonstrates that the university does not know how to genuinely listen to and respond to Black women. The invitation of Black women to meetings is not the same as involving them in decision-making processes, Blass said.

“It’s literally like — you bring them into this space and then you shove them back and they’re not even relevantly or tangentially involved in your process. It’s literally just for show,” Blass said.

The university cannot expect Black students to feel supported if it is actively tokenizing Black women who work on campus. Georgetown should stop using the presence of Black employees to cover up for their inability to support Black survivors and should instead use their time to genuinely listen to organizers’ concerns.

Even when the university finally sits down with students, it fails to adequately listen to and address their demands.

“Smulson had opened this meeting stating that he knows it’s hard to be a person of color at a predominantly white institution, a statement that came across as patronizing and placating at best, and certainly not as a statement of support or solidarity,” Brown wrote in an email to The Hoya.

Georgetown has responded to organizers’ specific demands with repeated disrespect for student organizers and Black women across campus.

There is no excuse for Georgetown’s behavior. The university must immediately commit to implementing BSC’s demands, and students deserve tangible updates throughout the process. The university’s alarming tokenization of Black women employees and disrespect of student organizers also must end immediately.

If implemented, BSC’s demands would make Georgetown a more supportive environment for all its students, but especially for Black women and nonbinary survivors. Thus far, however, the university’s actions have only reaffirmed that Georgetown doesn’t care.

Resources: On-campus confidential resources include Health Education Services (202-687-8949) and Counseling and Psychiatric Services (202-687-6985); additional off-campus resources include the D.C. Rape Crisis Center (202-333-7273) and the D.C. Forensic Nurse Examiner Washington Hospital Center (1-844-443-5732). If you or anyone you know would like to receive a sexual assault forensic examination or other medical care — including emergency contraception — call the Network for Victim Recovery of D.C. (202-742-1727). To report sexual misconduct, you can contact Georgetown’s Title IX coordinator (202-687-9183) or file an online report here. Emergency contraception is available at the CVS located at 1403 Wisconsin Ave. NW and through H*yas for Choice. For more information, visit sexualassault.georgetown.edu.