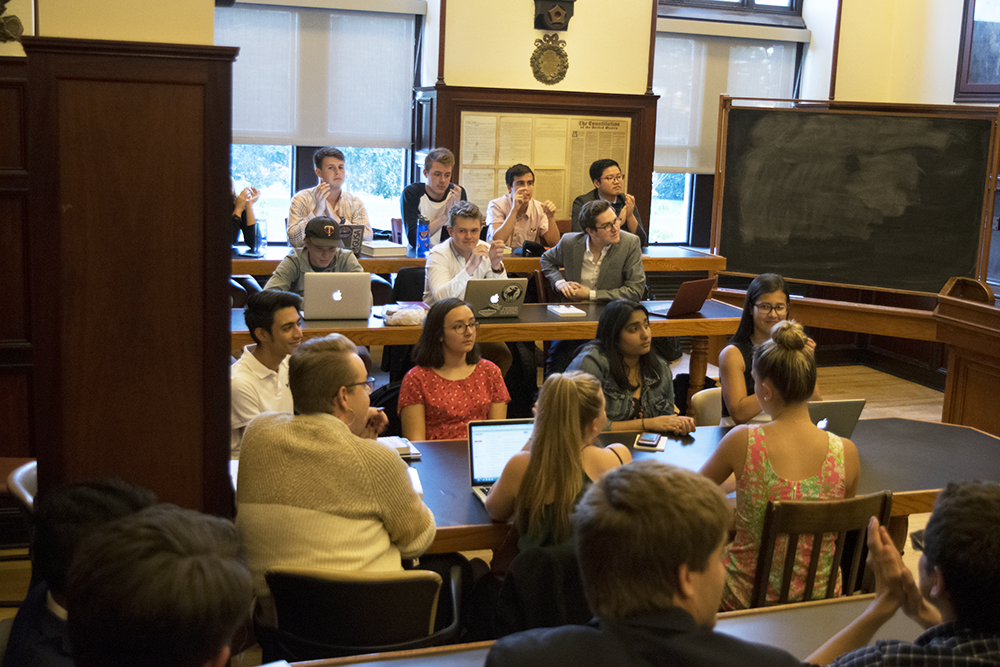 Eighteen new senators were elected in the Georgetown University Student Associations senate elections for the 2018-19 school year that were held April 19. This election marks the first one since the passage of a set of referendums that upended voting policy this February.

The referendums that altered GUSA elections were attached to the executive elections that took place February 22. The referendums moved upperclassman senate elections from the fall of the year in which the senators serve to the spring of the preceding year.

Josh Sirois (SFS ’20), Juan Martinez (SFS ’20) and Harry Clow (MSB ’19) were appointed transition chair, transition vice chair and transition finance and appropriations committee liaison, respectively, on April 22. These three positions were newly created by the referendums to serve for the transition period over the summer, which did not exist under the old system.

In past years, all senate elections took place in the fall. Beginning with this week’s elections, that is now true only of first-year senators and at-large senators, the latter of whom have no restricted constituent base and instead are elected by the student body as a whole.

The overall turnout of the preceding senate elections, which took place in September 2017, was seven points higher at 30 percent.

According to Minji Doh (SFS ’19), chair of the GUSA Elections Commission, that low number may not truly be a result of decreased community engagement; rather, she pointed to the fact that the incoming freshman class will not vote until the fall. Their absence in these elections, Doh said, depressed the turnout numbers.

“Usually, our biggest turnout is from the freshmen,” Doh said in an interview with The Hoya. “This year, obviously, they are not included in the freshman Senate race. The freshmen that are voting right now are technically sophomores. In the fall [of freshman year], everybody’s super excited. So we would have to wait for next year for the overall turnout.”

“It’s really hard to compare [the turnout statistics] to last year, because the districts usually are mixed with sophomores, juniors and seniors, so it’s kind of hard to distinguish them,” Doh said.

Though senate races in incoming freshman classes have historically been very competitive, the races in the rising sophomore and junior classes were significantly more crowded with candidates than district races in previous years, according to Sirois, a three-time senator who was re-elected March 19.

“For the rising sophomore and junior classes, there was double the amount of people than there were seats available. I’m not going to say it was cutthroat, because everyone was really nice and cordial, but it was definitely a lot more competitive than we’ve seen in the district system in previous years,” Sirois said.

Now that the district boundaries have been removed, the constituency pools are larger, and all the candidates in each year campaign are in direct competition with one another, Sirois said. He pointed to his experience campaigning in the district system for the at-large senator seat with Martinez, his friend, as an example.

“We weren’t competing with every member of our class,” Sirois said. “And that’s where it got to be a little more difficult. It’s not based on where you live now; it’s based truly on representing your class, which made it more competitive, for sure, in the freshman and sophomore classes.”

The six elections for rising senior senators, meanwhile, were much less competitive than those of the younger grades, according to Doh. The only competition took the form of an unofficial write-in campaign, which posed an electoral challenge to the official candidates but was ultimately unsuccessful.

“Upcoming seniors, so Class of 2019, [were] uncontested because we had six people running and there were six seats,” Doh said. “There was a viable write-in campaign, so we didn’t know what was going to happen.”

On the whole, the lack of freshmen made the elections much less error-prone than usual, as measured through reports to the Election Commission, Doh said.

“This season was actually really smooth sailing. We didn’t receive a lot of complaints — definitely fewer than in the past,” Doh said. “I think this year, everybody was in good spirits, and I think that it was also because this was upperclassman races. A lot of them already had some kind of experience, more or less, with the procedures. We would have a [few] more complaints from incoming freshmen.”

Correction: A previous version of this article called the February executive elections the executive board elections.