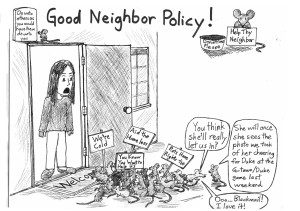 Before the recent special election in Massachusetts, I shared in the common expectation of victory for Democrat and Massachusetts Attorney General Martha Coakley. Boy, how wrong I was. Swept to victory by a late-breaking tidal wave of enthusiasm, Scott Brown will become the first Republican to represent the Commonwealth in the Senate since 1979. As interesting as the back story of this epic political upset is, I find its implications for the near political future most salient. This incredible race – set against the backdrop of a fallen liberal lion, a fresh new president, a fuming conservative grassroots movement, an historic health care proposal and rapidly approaching midterm elections – is one for the history books.

The “duh” takeaway here is simple: It’s a rough time to be a Democrat. Clearly, the Obama brand is tarnished to the extent that vulnerable congressional Democrats cannot hope to rely on White House popularity to buoy their re-election bids. President Obama trounced Sen. John McCain (R-Ariz.) in Massachusetts by a whopping 26-point margin, making it one of his strongest states. Yet an Obama endorsement and ad appearance were not enough to secure victory for Coakley. Remember, this election comes on top of robust Republican victories in Virginia and New Jersey last November – two elections in which the president also had a great deal of visibility. Unless the president’s image undergoes a dramatic rehabilitation, “hope,”change” and a smooth speech won’t be enough to carry Democrats to victory this fall.

Let’s step back a second. Are things really as bleak as they appear for the Democrats? Virginia? They’ve always had a strong conservative vibe. New Jersey? More competitive than you might think. But Massachusetts is the state that voted for George McGovern in 1972. Massachusetts has an 88 percent Democratic legislature, had a (previously) 100 percent Democratic congressional delegation and is the home of the Kennedys, Kerry and Dukakis. If a Democratic candidate as well-funded, well-known and well-regarded as Martha Coakley – on turf as ostensibly favorable as Massachusetts – can’t summon an electoral victory, then no Democrat nationwide is safe. How can you conclude that a Brown victory is anything but a death knell for the Blanche Lincolns (D-Ark.), the Arlen Specters (D-Pa.) and the Harry Reids (D-Nev.) of this country?

Keep your ears peeled for “retirement” as the buzzword of the next few weeks. Already, we’ve seen vulnerable Senate Democrats like Byron Dorgan (D-N.D.) and Chris Dodd (D-Conn.) throw in the towel, accompanied by House members from conservative districts Bart Gordon (D-Tenn.) and John Tanner (D-Tenn.), Vic Snyder (D-Ark.), Brian Baird (D-Wash.) and Dennis Moore (D-Kan.). This trend will only amplify in the aftermath of the Democratic debacle in Massachusetts. Just six days after the Brown victory, for example, Rep. Marion Berry (D-Ark.) made an out-of-the-blue announcement to vacate such a seat. As Democratic senators and representatives come to grips with the increasingly hostile political environment this November, many will opt for the easy way out – a cushy retirement with seven figures from a lobbying or law firm. Pay attention to John Spratt (D-S.C.), Ike Skelton (D-Mo.) and Paul Kanjorski (D-Penn.); will they cave to the political pressure at hand? If so, the GOP won’t hesitate to voraciously pounce on those districts. Remember, the key to the 1994 Republican sweep was a large crop of Democratic retirements. Replication of this environment just might mean the perfect storm for the House changing hands come January 2011 (though the odds are still long).

A final significant aspect of this race was Brown himself. The president snickered about Brown’s use of his pickup truck as a symbol of his “everyman-ness.” My cheeky response is: Who’s laughing now, Mr. President? Frankly, Brown ran a better campaign than Coakley did. Uniting a coalition of Republicans, an overwhelming majority of Independents and a surprisingly large chunk of Democrats, Brown ran on a message of fiscal responsibility, re-evaluation of the current health care proposal and bringing balance to a heavily Democratic Washington. More importantly, he was a good fit for his state. His socially moderate positions broaden the GOP tent, and successfully swayed a swath of moderate voters into voting Republican. If anything, Brown’s victory should be a clarion call to the GOP that endorsing tea-baggers is not the path to resurgence. By supporting moderate, pragmatic Republican candidates – and not holding them to preposterous litmus tests – Republicans have a real shot at returning to national dominance. Brown’s jaw-dropping victory is case in point.

Of course, all of this could be moot. Ten months is a lifetime in politics, and climates, candidates, fundraising and poll numbers will surely change drastically nationwide between now and Nov. 2. That said, in 2010 Democrats look likely to face a brutally cold “winter of discontent.”

Sam Dulik is a freshman in the School of Foreign Service. He can be reached at sdulikthehoya.com. Quorum Call appears every other Tuesday.

*To send a letter to the editor on a recent campus issue or Hoya story or a viewpoint on any topic, contact opinionthehoya.com. Letters should not exceed 300 words, and viewpoints should be between 600 to 800 words.*