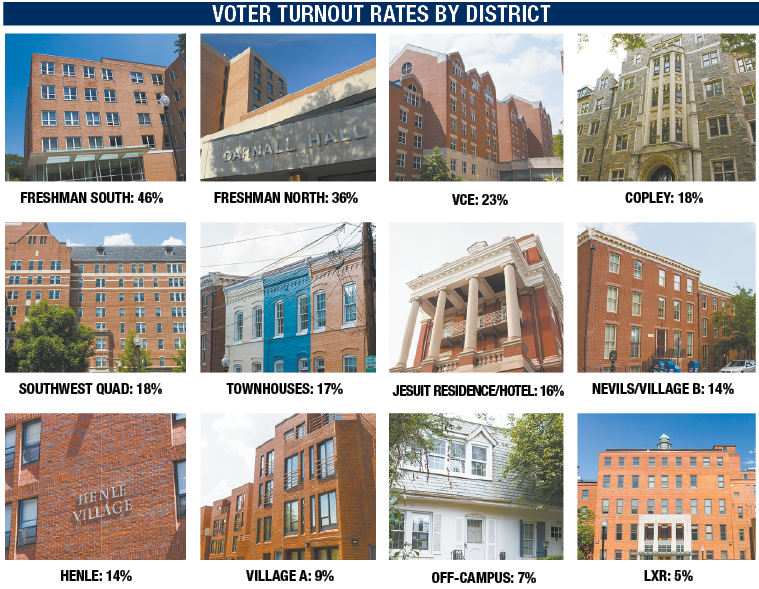 Nineteen percent of the undergraduate population, around 1,252 students, voted in the election, in which 46 students campaigned to serve as at-large senators and representatives of the 11 residence-based districts. Last year’s voter turnout was 25 percent.

The GUSA Election Commission posted results on Twitter early Friday morning after a 24-hour online voting window Thursday. Election winners were sworn in at a ceremony Sunday before taking part in their first senate meeting.

According to the Election Commission’s Twitter page, the Freshman South district, which consists of New South Hall and Village C West, had the highest turnout with 46 percent, followed by 36 percent in Freshman North, which includes Darnall Hall and Harbin Hall.

These figures were twice that of upperclassman districts. LXR, Off Campus and Village A had the lowest voter turnouts at 5 percent, 7 percent and 9 percent, respectively.

Correspondingly, Freshman South and North also had the highest number of candidates. Due to a technical glitch, the Freshman North results were delayed until Sunday.

“Turnout is always very light in the fall,” Willard said. “In the spring, we elect the president and the vice president, and everyone gets really involved in that, so there will be high turnout.”

For the LXR, Off-Campus and Townhouse districts, which did not have official candidates on the ballot, residents wrote in the student of their choice. The seats were filled by Michael Fiedorowicz (COL ’18), Owen Coffin (COL ’16) and Elizabeth Oh (SFS ’16), respectively.

All three write-in candidates indicated their agreement to serving on the senate, which eliminates the need for a special election.

Willard said he would have preferred traditional campaigns over write-in candidates.

“One of our disappointments is that we didn’t have candidates file for every seat,” Willard said. “It’s always better to see candidates running than write-ins.”

Oh and Fiedorowicz decided to run as write-in candidates, because they did not plan to participate until late into campaign week.

Oh, who previously served as GUSA Chair of Intellectual Life, said that she did not anticipate running for the position.

“When other senators told me that no one had officially run for Townhouses, I just asked my friends to vote for me and hoped for the best,” Oh wrote in an email to The Hoya.

In her position, Oh said that she will work on the continued expansion of mental health resources, sexual assault policy reform and improved townhouse maintenance.

Coffin said that he was unaware that his name was being circulated as a write-in candidate until the results were announced. GUSA Deputy Chief of Staff Ken Nunnenkamp (MSB ’16), Coffin’s roommate, orchestrated the campaign to elect him

“I found out when someone messaged me at 2:37 a.m. to congratulate me,” Coffin wrote in an email to The Hoya. “I thought it was funny and immediately asked my roommates who were up if they had anything to do with it.”

After a tweet confirmed his election to the post, Coffin said that he was initially unsure of whether or not to accept it.

“I decided it couldn’t hurt, though,” Coffin wrote. “I hope to bring to GUSA the voice of the student who doesn’t want anything to do with it, which is a lot of us.”

Nunnenkamp said that he was proud of the successful campaign.

“When the opportunity arose to serve as his campaign manager for a riveting 22 hours, I jumped at the chance,” Nunnenkamp wrote in an email to The Hoya. “We worked so hard, came so far and got Owen the win he truly deserved … I think his victory says everything about the future of GUSA.”

Despite his unconventional victory, Coffin said he still hopes to improve GUSA and bring an outsider’s view to the senate.

“I hope to improve GUSA by giving a true outsider’s opinion, free from the bias of those who thought that the best way to affect campus life is through GUSA,” Coffin wrote. “I want to give the perspective of those student leaders who operate in all the spheres outside of GUSA and make an impact on campus.”

Among the other new senators is Freshman South representative Ben Baldwin (SFS ’19).

Baldwin said that he hopes he can collaborate with the other senators to improve the freshman experience.

“I know a lot of kids have been excited about reforming the meal plans, and of course [having] greater opportunities for diversity and cultural groups,” Baldwin said. “I want to … make sure all our dorms are really connected so we can build a freshman identity.”

“I guess students running for the senate should have used higher resolution photos for their posters,” Rohan wrote in an email to The Hoya.

Khan said that one of the senate’s goals this year is to remodel the Finance and Appropriations Committee.

“There isn’t much of a strong relationship between the Fin/App representatives and the advisory boards that they represent,” Khan said. “One goal for this year is to change that, and to make a more direct line of communication.”

Khan also said that she is excited to work with a group of students from different backgrounds in the senate.

“This is actually a more diverse group of senators this year,” Khan said. “We have a lot of committees historically not represented. … It’s a great year for the senate to rebuild itself.”