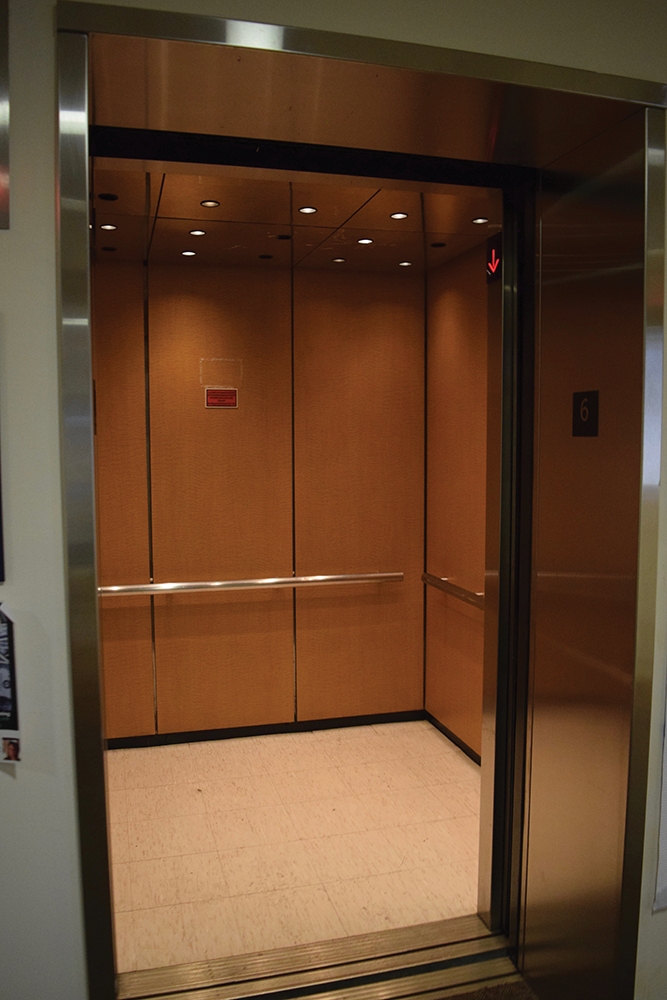 Elevators in Reynolds Hall and Darnall Hall are plagued by persistent malfunctions, as they have fallen between floors and students have been stuck inside them, according to multiple residents of these halls.

Students concerned for their safety have questioned whether the Georgetown University Office of Planning and Facilities Management has adequately addressed these complaints.

Two elevators in residential halls were out of service for repairs in the past two months, according to interim Vice President of Planning and Facilities Management Greg Simmons. Facilities also responded to about 29 minor work requests related to elevators during this time, such as light bulb replacements, Simmons wrote in an email to The Hoya.

Students in Darnall have been experiencing malfunctioning elevators since the beginning of the semester, according to Jack Feingold (MSB ’22).

One of the Darnall elevators fell three weeks ago while Feingold was riding in it, he said. As he was taking the elevator up from the basement, the elevator came to a halt and then proceeded to drop several floors, before stopping and resuming again, Feingold said.

“It’s pretty irritating; I won’t lie,” Feingold said in an interview with The Hoya. “The fact that [the university] let their dorms fall into disrepair is kind of terrible, especially for a university of this stature,” Feingold said.

However, Feingold did not submit a report of the incident, and facilities has not received any reports of elevator malfunctions in Darnall, according to Simmons.

“We encourage community members to report any issues or concerns to Facilities Management,” Simmons wrote.

Morgan Irish (COL ’20) was on her way to class when the elevator in Reynolds suddenly fell from the fourth to the second floor, she said. The elevator’s doors would not open, and after a few minutes, the elevator fell again to the first floor, Irish said.

She tried pressing the call button in the elevator, but it was not operational, Irish said.

Though Irish did not sustain any serious injuries, she reported physical discomfort and expressed concern over what might have happened if the elevator had fallen more than two floors.

“My back and knees hurt a little bit when I ran the next day, because my knees were locked out when I fell,” Irish said. “I could imagine that if somebody fell from the top floor, they could get seriously hurt.”

Irish wrote an email to the Office of Planning and Facilities Management and submitted a work request, she said. Facilities emailed Irish that the elevator was experiencing issues because water had leaked into the elevator system due to a broken pipe, she said.

Anni Xu (COL ’21) experienced a similar issue with the Reynolds elevator, which made her question her safety. The elevator fell to the second floor, shook, got stuck and fell again to the first floor, Xu said.

“The experience was absolutely terrifying,” Xu wrote in an email to The Hoya. “I was scared I was going to die, before I just realized this was a semi-regular occurrence.”

Xu had previously heard multiple students complaining about elevator issues in the Southwest Quad, and she hopes that the administration will take action and address students’ concerns about basic safety on campus.

“The Southwest Quad is relatively new on campus, so I feel like we shouldn’t be experiencing these facility issues,” Xu said. “It’s really frustrating for how much tuition is, yet there are so many basic issues.”

Elevator repairs might be delayed because the delivery of specific parts sometimes takes longer, and expert elevator technicians are occasionally brought in to conduct repairs, according to Simmons.

Causes for elevator malfunctions vary widely, as do repair times for a typical problem, said Sheryn Villanueva, operations administrative assistant at Potomac Elevator Company. Repairs can take anywhere from a few hours to days or even months, Villanueva said.

“Often, the root problem behind lengthy repairs is lack of availability to needed parts,” Villanueva wrote in an email to The Hoya. “There are elevators out there that were built in 1970 and the manufacturing company doesn’t exist anymore.”

Facilities is working to fix the elevators to ensure safety for students, according to Simmons.

“Safety is a top priority for Facilities Management and we are committed to ensuring elevators are operational, reliable, and safe to use,” Simmons wrote. “We have processes in place to rapidly respond to out of service elevators and work to resolve issues as quickly as possible.”