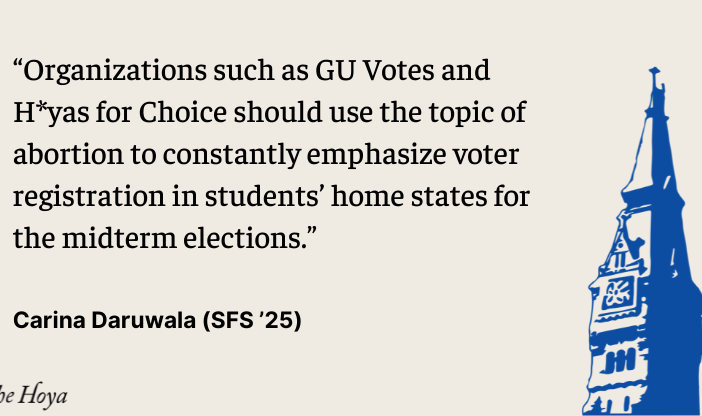 In a world filled with instability and unease, I urge students to actively partake and engage in relevant political discourse instead of yielding to apathy.

On May 2, 2022, a draft of the Dobbs v. Jackson Women’s Health Organization decision was leaked to the public, which sparked protests across the country. The decision was based on overruling Roe v. Wade, the landmark case that conferred the right to abortion. As a result of the reversal of Roe v. Wade on June 24, millions of people from all over the United States will lose the ability to undergo a safe and secure abortion procedure — and this is just the tip of the iceberg.

In his concurring opinion, Justice Clarence Thomas argued that the Supreme Court should “reconsider” its past rulings, placing in jeopardy other once-assumed “constitutionally protected” rights through court decisions such as the access to contraception, the ability of individuals of different races to marry, and the legality of marriage for two members of the same sex. Moreover, nearly two dozen states could explicitly restrict abortion rights. Some of their laws went into effect immediately. Currently, abortion is illegal in nine states, and in 13 other states, agressive state restrictions make the procedure extremely difficult to access.

This has direct negative consequences for marginalized populations such as racial minorities and low-income groups, especially the disproportionate amount of those who fall into both categories. In 2014, 49% of people seeking abortions had a family income below the federal poverty line, and Black women were more than three times as likely to seek an abortion than white women. The impact of the Dobbs decision upon marginalized groups has already proven to be detrimental, and we must not allow ourselves to stand idly by.

It wasn’t as if we were not expecting this.

Many younger age groups, especially 18-24 year olds, consistently have lower voter turnout than those from the 45-64 and 65+ age groups. With less of us voting, how can we expect to effect change? Voter apathy is a blight. Your voice, no matter how seemingly insignificant, can make a contribution overall. Fight against the urge to remain apathetic. Reposting Instagram stories can only get you so far; it is the vote that makes a difference.

As a whole, Georgetown University’s attitude towards comprehensive sexual education, abortion and pregnancy reflects this apathy and has been misaligned due to its strict adherence to Catholic doctrine. In 2020, the university banned an abortion education workshop from taking place on campus. After the Dobbs decision was announced, President John J. DeGioia (COL ’79, GRD ’95) issued a statement citing Catholic Social Thought and invoking “complex questions of moral judgment.” These vague remarks merely offered a promise to engage in civil discourse instead of taking any immediate action.

There are a few slivers of hope upon the horizon. This year’s midterm elections are gearing up to be some of the most contentious in heavily divided districts and states. The overturning of Roe v. Wade has led to an almost direct result in increased voter registration, mostly an increase of women as registered voters. For example, in the week after the Court’s decision, over 70% of new voter registration in Kansas came from women. Female registrants continued to persist until the primary elections, in which voters successfuly struck down a referendum that would have ended access to a safe abortion in Kansas. Kansas’ example demonstrates how voting can make an impact and lead to positive change. On Georgetown’s campus, students immediately began to amass, making signs in record time and arriving at the Supreme Court for a midnight rally. H*yas for Choice, an organization that advocates for reproductive justice and sexual health awareness on campus, organized and partially funded rides to and from rallies at the Supreme Court. The week after the leaked draft saw several Georgetown students come together in defense of the right to choose a safe and accessible abortion.

As students at Georgetown, we have access to resources, funding and something bigger than all of us: a community of dedicated individuals. Organizations such as GU Votes and H*yas for Choice should use the topic of abortion to constantly emphasize voter registration in students’ home states for the midterm elections. Voter apathy is something that we cannot and must not endure in this world without Roe. Request that absentee ballot. Take advantage of the sexual healthcare resources offered on campus. Act now to bolster our support of and donations to organizations such as H*yas for Choice so that we may continue to navigate the rough waters of the post-Roe era.

Carina Daruwala is a sophomore in the School of Foreign Service.