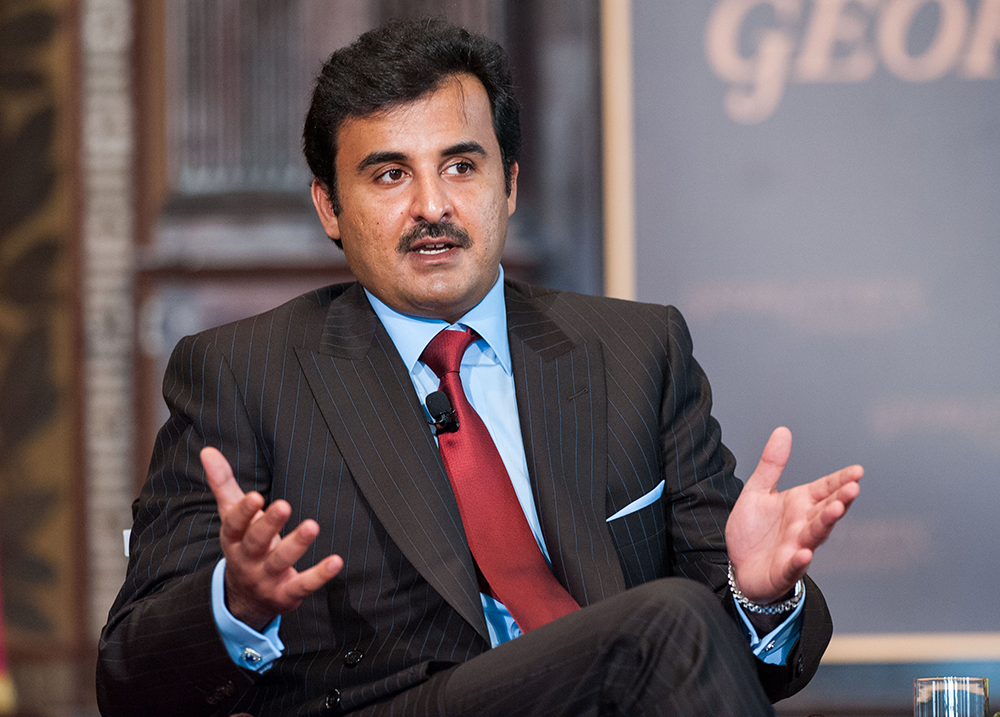 The event was met with protest from a group of seven students against Qatar’s labor system, who stood up after the emir had left the stage, chanting, “Georgetown is undermining its core Jesuit values by condoning and benefiting from this system that neglects the dignity and human rights of these workers.”

The group also protested in Healy Circle, a free speech zone, after the event and were told to leave multiple times by Associate Vice President for Student Affairs Jeanne Lord, who cited safety concerns. Lord did not respond to request for comment by press time.

Al Thani, 34, the youngest head of state in the Arab region, assumed rule after his father’s 2013 abdication. He came to campus after visiting the White House to meet with President Barack Obama on Tuesday. DeGioia welcomed Al Thani and addressed the strong commercial, educational, scientific and technological ties that the United States shares with Qatar.

“One of the youngest heads of state in the world, the emir began his service after his father Sheikh Hamad bin Khalifa Al Thani stepped down. Since becoming emir in June 2013 he has provided steady leadership in a region often beset by turbulence,” DeGioia said.

Before Al Thani’s visit to the United States, he visited Salman, the new King of Saudi Arabia in Saudi Arabia. Al Thani discussed that he believes it is Saudi Arabia’s role to try to solve the problems that exist in the region.

On Feb. 24, The New York Times published Al Thani’s op-ed, “Qatar’s message to Obama.” In it, he wrote about the necessity to take action against the terrorist groups that are continuing to gain power in the Middle East and beyond as well as tyrants that refuse to share power.

“Addressing the root causes of terrorism will require a deeper, longer-term and more strategic approach to the problem. It will require political leaders to have the courage to negotiate pluralistic, inclusive, power-sharing solutions to regional disputes. And it will require that tyrants be held to account,” Al Thani wrote.

He echoed this sentiment in the discussion.

During the event, Al Thani spoke about the Arab Spring and the necessity of engaging the youth who began those movements and bringing their voices to the table of discussion.

“You have to give them hope for the future,” he said. “We should never tie terrorism with our religion, terrorism doesn’t have a religion … Hope is the most important thing we should give.”

The Arab Spring, a series of revolutionary demonstrations, protests and riots, began December 2010. Since January 2015, rulers have been forced from power in Tunisia, Egypt, Libya and Yemen. Al Thani also expressed concern with the United States’ involvement in the region.

“I’ll be honest with you — we shouldn’t only be depending on America. [We] Arab countries, we should do our own work, and then we should ask the Americans if we need help to help us solve our problems,” Al Thani said.

The British-educated Al Thani spoke about Qatar’s focus on reforming education as well as Qatar’s role in stabilizing the region.

Al Thani and DeGioia’s discussion was followed by a question-and-answer session with the audience, and one student asked the Amir about Qatar’s bid for the 2022 World Cup.

“It’s bad to say that the race was between Qatar and America, to hold the World Cup of 2022, and I know that you guys, people here were very upset that how could this small country beat this great country, and I think you should believe … that you can lose sometimes,” Al Thani joked.

Callie Flanagan (COL ’17) attended the event and said she was impressed by the relevance of Al Thani’s discussion on education.

“I was really impressed. … I thought he talked about issues that were relevant especially to the university. He talked a lot about education, which for me personally is very interesting, and as a university it is really important that he talked about that,” Flanagan said. “One of the most interesting things he said was when he was talking about how the cause of terrorism is hopelessness, and I was very impressed with his stance towards that.”

Not all students were equally satisfied with Al Thani’s discussion. The student protesters, who stood up at the end of the event to a confused audience, cited displeasure with Qatar’s labor system.

“We’re just a group of concerned students; we’re not affiliated with any of the groups on campus,” Françoise Farrell (COL ’17), a protestor, said. “But basically the issue is that the Kafala system is a system of labor that Qatar uses, and basically it’s called the sponsor system, and so in order to be a migrant worker working in Qatar you have to be sponsored by your employer … so you’ll get sponsored, and then you’ll come over, then they will take your passport and confiscate your work visa.”

The protest moved outside to Healy Circle, where the students held up a sign that read “SFS-Q Exploits Migrant Workers, Modern-Day Slavery is Not A Jesuit Value! #WorkerSolidarity.”

Lord approached the group multiple times and told them to leave, but since Healy Circle is, in fact, a designated free speech zone, the students did not leave.

“She is telling us that we are not allowed to be here and that we need to leave and that it’s inappropriate for us to be protesting this, but this is a free speech zone, and so technically I don’t think they can do anything,” Farrell said.