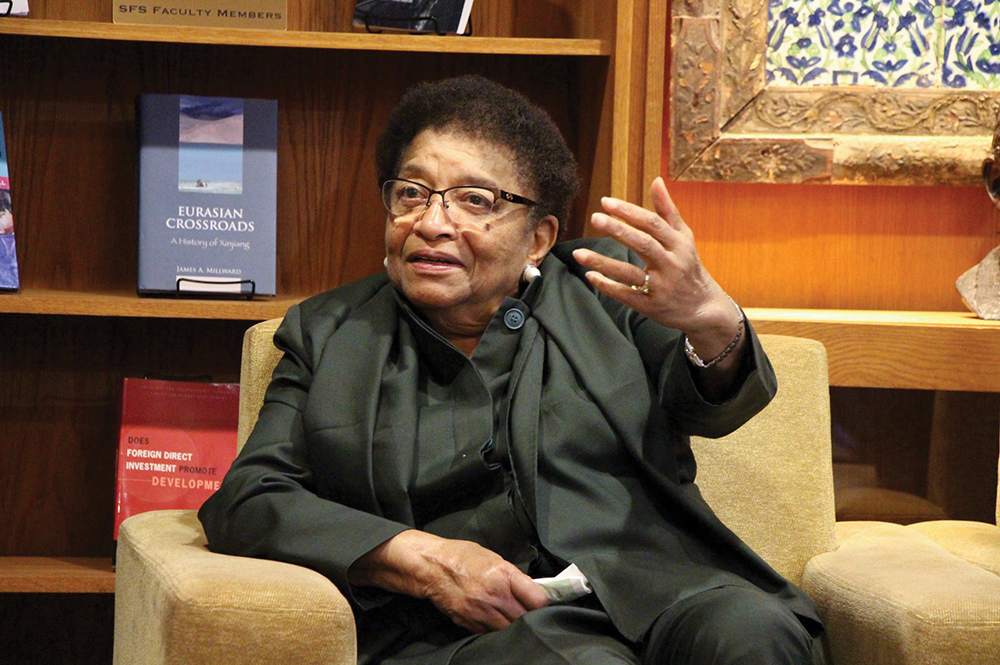 Evolving cultural attitudes towards women in leadership is crucial for promoting peace, former President of Liberia Ellen Johnson Sirleaf said Wednesday as part of a three-day workshop on conflict recovery.

Sirleaf was the first woman elected as president in Africa and she served two terms from 2006 to 2018. Sirleaf was awarded the Nobel Peace Prize in 2011 for her work defending women’s rights.

Speaking to two undergraduate international relations classes taught by Georgetown University professor Lise Howard, who moderated the Oct. 2 event, Sirleaf answered a number of student questions on the importance of women’s empowerment and post-conflict policy both in politics and Liberian society.

By the end of her time in office, Sirleaf felt as though she had changed the mindset of people in Liberia about what a woman in power could do.

“It’s accepted now, even the little girls in our rural Liberia are known now to challenge,” Sirleaf said. “Challenge their teachers and say, ‘I can be what I want to be as a woman president.’”

Sirleaf strongly believes that, when given the opportunity, women are better at running a society than men.

“I can’t tell you I have empirical evidence. I wish I could,” Sirleaf said.

Director of the Global Human Development Program Steven Radelet approached Sirleaf about establishing a program for her at Georgetown after he served as an economic advisor to Sirleaf during her time in office.

Along with Dean of the School of the Foreign Service Joel Hellman, Radelet designed a three-day program that has been hosted three times since spring 2018. The program includes a series of faculty meetings, small group meetings about post-conflict reconstruction and classroom discussions and public speeches.

Sirleaf’s most recent visit marked her fourth time coming to Georgetown. She is set to visit again in either March or April 2020, according to Radelet.

“I think there’s been pretty enthusiastic response on both parts,” Radelet said. “Each time she comes, I’m already getting requests from student groups who missed out this time to want to be on the schedule next time.”

Sirleaf was excited about the opportunity to participate in a number of in-depth interviews and discussions about Liberia as well as the chance to meet and engage with students, according to Radelet.

Gabriella Turrinelli (SFS ’23), a student in Howard’s introductory course, was struck by how much Sirleaf stressed the importance of women’s empowerment in politics.

“I thought it was really interesting, especially how she emphasized the role of not just getting women into politics but advancing women’s rights outside of politics within the rural parts of Liberia,” Turrinelli said in an interview with The Hoya.

Prior to this event, Sirleaf’s audiences were limited and an attempt was made to change that this year, according to Howard,

“We had a little feedback that maybe we weren’t having quite enough broad student engagement. So that was when we decided to bring her to the introduction to IR class. Just so she could engage with a lot of students,” Howard said in an interview with The Hoya.

Even after meeting with Sirleaf a number of times, Howard is still amazed by the work Sirleaf accomplished in the face of numerous obstacles, including the end of a civil war and the 2014 Ebola outbreak.

“I tell my students that I’ve met a lot of important people over the course of my career, a lot of heads of state and famous people and in a variety of ways, and I still have that feeling of a little bit of starstruck trying to talk to her,” Howard said.

People should not underestimate the role that the United States has had in creating important international standards that other countries look to, Sirleaf said.