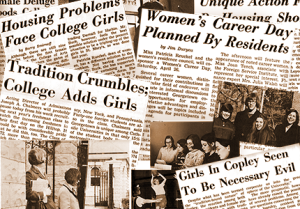 Dwight Eisenhower has just been inaugurated as president. Julius and Ethel Rosenberg have been executed. The first successful open-heart surgery has been performed in Philadelphia. All of this happened in 1953. And Georgetown’s School of Foreign Service just opened its doors to the Class of 1957, which, for the first time, would officially include women.

Female students at Georgetown were not an entirely new development in the 1950s. The Georgetown University Hospital Training School for Nurses, now the School of Nursing & Health Studies, has admitted women since its founding in 1903. (Its first graduating class was entirely female.) The College would remain strictly male until 1969.

Marianne Delaney Melley (SFS ’56) enrolled in the SFS in January 1954, the fifth woman to do so, following a group of four female students who began the previous fall. When Melley initially applied, Georgetown wasn’t open to women. But she knew she wanted to go into the foreign service, so she transferred from Dunbarton College of the Holy Cross as soon as the opportunity opened.

“I just took my transcript and got on a bus to D.C. and got into the school,” Melley said.

The application process was relatively simple — “Not at all what it’s like today,” Melley said — although later, records would show the standard of academic excellence to which women in the early coed years of the College were held was significantly higher than it was for men.

Though the SFS’s decision to admit women was a breakthrough, Melley recalled that attitudes on the Hilltop didn’t change immediately.

“It was an interesting feeling. There were 1,160 students, and only five were women,” Melley said. “A couple of the priests didn’t want to teach women.”

No dorms were available for women because the female students in the nursing school were only day students. Athletic programs were closed to women. The only extracurricular available to Melley was working on the staff of the SFS journal, The Courier. But socially, Melley didn’t encounter a severe gender disconnect.

“I had great classmates. Everyone was very nice,” she said. “We all met in the student lounge. We used to go to The Tombs.”

In the academic sphere, she also found exactly what she had hoped to find at Georgetown: a challenging environment that encouraged growth and provoked thought.

“I loved everything about it. I never worked so hard in my life,” Melley said.

However, with only six units left to complete her degree, Melley left Georgetown to move to Switzerland with her husband. According to Melley, at the time, a woman with a college degree had only three options: to become a nurse, a teacher or a secretary.

After living in Switzerland and then London for six years, Melley returned to the States with her husband and child.

Melley always intended to return to Georgetown, but became increasingly involved in raising seven children and running the operations of her husband’s business.

Nearly 20 years after Melley first arrived on campus, Georgetown had been transformed in many ways, but gender divides persisted. Before the College opened its doors to women, Darnall Hall (named for Eleanor Darnall, the mother of Georgetown University founder John Carroll) and St. Mary’s Hall had been converted to dorms for female students. Except for two floors in Copley Hall, all dorms were single-sex. While male students always had maids who helped tidy and do laundry, women were not afforded any of these privileges. First-year female students had to adhere to a curfew; no such requirement existed for their male counterparts.

But even with these disparities, Georgetown continued to focus on working to create a campus where, at least in the realm of academia, there were virtually no dissimilarities between the genders.

Marcia Morris (FLL ’74), a professor of Slavic languages at Georgetown, was among the first crop of female students.

“There were a small number of professors who required women to wear skirts to class, but, by and large, I didn’t experience any noticeable discrimination in the majority of my classes,” Morris said.

During her time at Georgetown, Morris was involved in tutoring projects and language clubs to supplement her studies as a German and Russian double major, but she said life has improved for female students over the past few decades.

“There is a much higher percentage of female faculty on campus today, so students today have both male and female role models. This really makes a difference,” Morris said.

Today, 55 percent of Georgetown’s student body is female. But female students still face obstacles on campus, and the Women’s Center was launched in 1990 as a space for women to convene and address the problems they face on campus, ranging from general attitudes to sexual assault.

“The Women’s Center continues to address many of the same issues, because unfortunately, they are still a part of our reality,” Laura Kovach, the center’s director, said. “Women use our space to address these issues and find support.”

On many fronts, female students have made progress. Lizzy MacGill (COL ’14) is CEO of Students of Georgetown Inc., and the Georgetown University Alumni and Student Federal Credit Union’s seven-member board of directors includes two women. GUASFCU’s last female CEO was Katie Cohen (COL ’12), from March 2011 to March 2012. But one leader does not always guarantee institutional change. Though Clara Gustafson (SFS ’13) and Vail Kohnert-Yount (SFS ’13) led the Georgetown University Student Association last year, gender disparities still exist within the student government.

GUSA Deputy Chief of Staff Alyssa Peterson (COL ’14) in an op-ed in The Hoya (“ElectHer to GUSA Senate,” A3, Sept. 24, 2013) highlighted the dearth of female representation in the GUSA senate, which is currently 25 percent female, and urged women to run for senate seats. She identified many of the same problems women face on a national scale as factors that prevent parity in student government.

“Women have had fewer role models in the public sphere, and there are not a lot of women leaders to look to. It creates a trickle-down effect with certain gender norms,” Peterson wrote.

Student groups like Women in Politics, GU Women of Color and Georgetown University Women in Leadership promote female leadership, while Take Back the Night and R U Ready sexual assault. The two issues go hand in hand, Peterson said.

“Campuses will never be equal until you eradicate sexual harassment and discrimination. We’re trying to tackle these issues and make campuses more welcoming for women,” Peterson said.

While these resources represent leaps forward from what Melley had when she arrived on the Hilltop, more remains to be done to achieve equality on campus.

Georgetown has shifted from being an all-male university with only a few restricted spots available for women to a global institution with women leaders and both institutional and student-run organizations to incorporate the female campus population.

“It was a great experience,” said Melley. “Those are memories I treasure.”