The Trump administration plans to sign an executive order to suspend the section of the Dodd-Frank Wall Street Reform and Consumer Protection Act that prevents U.S. companies from selling and trading conflict minerals Feb. 14.

Section 1502 of the Dodd-Frank law required companies to disclose any resources in their supply chain extracted from the Central African region and show  that the mines from which they extracted the minerals are conflict-free.

President Donald Trump’s executive order — if signed will result in a more chaotic Central Africa as companies invest in supply chains, which involve more ethically dubious behavior. The extent to which this happens is, of course, dependent on how developing countries take it upon themselves to legislate against nefarious behavior and monitor supply chains of strategic goods within their borders.

The Trump administration justified the planned suspension of section 1502 by citing millions of annual compliance costs U.S. companies pay to  make sure their supply chains are free of human rights abuses and the fact that they must pass Securities and Exchange Commission reviews.

The order can relieve companies of the little social responsibility they already engage in internationally and lower the bar of ethics for upholding human rights by cleaning up supply chains. What this means for the western consumer is little — we will continue to buy these products — but what we should keep in mind is that henceforth ,if we buy a laptop, phone, tablet or any other product that requires rare earth minerals, we can expect it to be associated with violence, death, rape, displacement or slave labor. We may well be holding towels of blood to our ears when calling, snapping and texting.

The memo highlighted that when the mines were being inspected during 2010 and 2011, to ensure that they were conflict-free, some people in the eastern Democratic Republic of the Congo lost their jobs either temporarily or permanently if they were working for mines associated with human rights violations.

Following that logic, getting rid of standards that protected the locals will ensure these people will get their jobs back. We should expect a “thank you” note from the DRC to the United States for helping in its time of great distress.

Western corporations with a focus on value addition have no vested interest in a healthy industrial complex for developing countries still stuck in primary industries such as mining. The nature of the relationship is almost colonial and, given an unstable political atmosphere, will become exploitative.

Resource-dependent or sector-dependent developing countries should look independently and within their own geographical spheres to create strong incentives and penalties for corporate responsibility. This will require new means of aggressively and independently monitoring the supply chains of international corporations operating within their locales.

The interests of value-addition nations and extraction nations rarely converge, and thus, models for corporate responsibility and operating ethics will be skewed and applied disproportionately. The DRC needs to avoid disruptive effects on the stability and integrate the whole industry into a vertical monopoly of one company or country that has the resources to advance it without challenges from rivals.

It is like nationalizing, only in the least patriotic way because you are handing it over to one megacountry or megacorporation that no longer bids against your stability in an effort to attain cheap unlicensed minerals.

There are less aggressive means that the DRC can use, such as grounding non-conflict-free minerals, if it has to and appealing to unconventional strategies such as allocating taxation across different stages of production. This method can involve levying a higher extraction tax, sales tax and even higher customs taxes for companies that cannot show that its goods are conflict-free.

The limitations of this plan are that it assumes governments of resource-dependent countries are in charge of the territories in which mining or productive activity occur, are aware of transactions and have effective border control. Nations that have trouble maintaining internal security may have to introduce a military presence at mines, which often increases violence and atrocities for women in the local communities due to rogue troops.

While these situations seem ugly and unavoidable, developing an industrial complex that doesn’t threaten the stability of the nation can be difficult for countries with weak institutions and a long history of violence.

Only those countries bold enough to imagine their own solutions will be successful in developing conflict-averse industries. A corporation’s desire for profits and power does not have to be disruptive if developing nations can exploit that desire for control by offering a holy union between industry and company in exchange for ethical and responsible conduct. 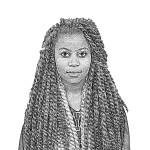 Mercy Radithupa is a sophomore in the McDonough School of Business. BUSINESS    OUTSIDer appears every other Friday.