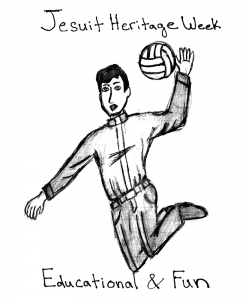 For all the talk of Jesuit values, Jesuit traditions and Jesuit heritage that can be heard almost daily on this campus, many students still lack a substantial education of the history and practices of all three counts. In order to fully understand Georgetown’s Catholic and Jesuit past, it is necessary to listen to the stories of early Jesuit leaders as well as contemporary ones, from Ignatius of Loyola to Francis of Buenos Aires, and to understand the aims and practices of the order. That way, students, regardless of their connection to Jesuit tradition, can have a better understanding of how to navigate Georgetown’s tradition when working to reform its practices. This week’s annual commemoration of Jesuit Heritage Week offers a chance to engage with and learn about the history of the Society of Jesus, — good and bad, political and spiritual.

The Jesuits at Georgetown will offer reflections about interfaith connections between at Hindu, Jewish, Orthodox and Muslim religious services. While there will be more informal events like Jesuit Trivia in Bulldog Tavern, Volleyball with Jesuits and Jesuits at Leo’s, there will also be academic dialogues on interfaith conceptions of Mercy and the Society’s interaction with education and social justice. The week will be, for many, the best opportunity to connect the 34 “black robes” who call the Hilltop home.

Fr. Charles Gonzalez, S.J., will open up his class on Jesuit history and spirituality to any comersall on Wednesday, and, on Thursday, professor. John Glavin (CAS ’ 64) will lead a tour around the campus to talk about its Jesuit legacy. For students who participated in discussions about Georgetown’s mixed history this fall when debating the names of Freedom and Remembrance Halls, both events will deepen the conversation beyond the name of a building.

Wednesday and Thursday will also feature panels on the work that Jesuits have undertaken at home and abroad. “Jesuits and Justice in D.C.: Race, Poverty and Peacemaking at Home from the 1960s Until the Present” offers faculty and staff insights on some of the most prominent Jesuit social workers and the legacy they have left, while “Contemplation in Action: The Many Faces of Jesuit Service in Latin America” brings the Jesuit community and Georgetown’s Latin American Student Association together to reflect on the impact that Georgetown students have had in the developing world. These and other events will highlight the strong emphasis that Ignatian spirituality places on service, as well as how that emphasis is reflected across the globe.

For those who desire to learn why Georgetown is the way it is today, Jesuit Heritage Week may be the best opportunity to do so.